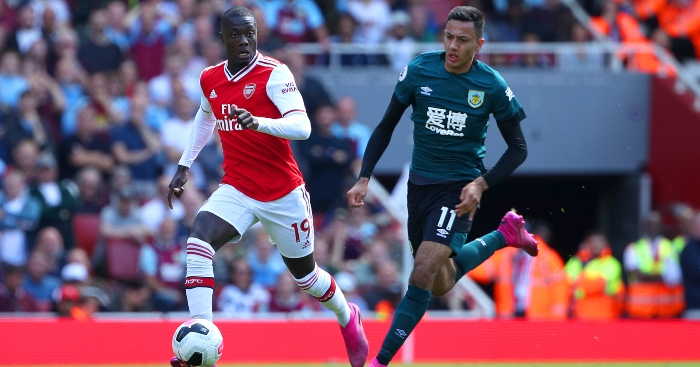 Nicolas Pépé might not have scored for Arsenal yet, but he’s already begun the important task of schooling opponents.

When Arsenal let Alex Iwobi leave for Everton on transfer deadline day there was a worry they’d lost a part of their identity.

The problem wasn’t losing an academy graduate after more than a decade – it was losing a man capable of pulling out a nutmeg like it was a rabbit from a hat. Thankfully, in Nicolas Pépé, they already had someone to fill that particular gap.

Away from north London, Pépé’s arrival was about as low-key as £72million signings can be, partly because the excitement came long before the move was made official, and partly because Harry Maguire moved for even more money less than a week later.

That’s not to say Arsenal fans weren’t getting hugely excited about his arrival. We had the usual repeated rewatchings of the Ivorian’s best moments in a Lille shirt, bringing excitement even to those who hadn’t known what to expect before he joined the party.

But Pépé’s debut from the bench against Newcastle was a subdued affair for both player and club.

Some were willing to accept it might take a little while for the winger to hit his rhythm. Then he came on for Reiss Nelson against Burnley and asked those people “are you sure?”.

At first glance, this is a simple humiliation of Clarets defender Ben Mee, with Pépé rolling the ball through his legs and going on his way, but the way he gets away from Jack Cork to set up the opportunity is just as impressive.

Cork is known for his discipline and smarts, helping him lock down a starting place in Sean Dyche’s side, and part of this comes from being able to identify the right thing to do at any given moment. Cutting off angles, spotting runs before they’re made… you know the drill.

Even on those occasions where he can’t intervene immediately, the former Swansea man will invariably have the smarts to hold firm and avoid committing himself. Well, at least he will when he’s not up against an opponent who has taken up immediate residence in his head.

Indeed, Cork is beaten so comprehensively that you barely notice he has been beaten, with Pépé having enough courtesy to ease him out of the frame and provide a fresh distraction. The way in which he protects him from ridicule is almost charitable.

As for the nutmeg on Mee, we should have known what to expect after just the smallest amount of exposure to Pépé, either at Lille or just in training at Arsenal.

In an early session, he let his new team-mates knew he was there by rolling the ball through the legs of both Granit Xhaka and Gabriel Martinelli in a display of don’t-give-a-f*ckness.

If you ever needed a sign that someone wasn’t likely to be overawed by a transfer fee or the weight of expectation, it was this, the equivalent of punching the bully in the face on your first day at a new school.

While there’s obviously a difference between nutmegging a team-mate in training and doing it on the field of play, there are parallels in the self-justification.

Pépé knows what you’re ‘not supposed’ to do, and that simply gives him more of an incentive to do it.

When you’re confident in your own end-product, you can trust that it will catch up with your ambition and just have fun in the interim.

Any feelings of sympathy towards Mee come not merely because he was humiliated but due to the manner in which it happens.

The defender has, like Burnley as a whole, thrived from always having the means to recover, whether that means a sliding block of a guarantee of being first to clear the danger after a save from the goalkeeper.

Here, though, once Pépé is gone, he’s out of sight. Mee feels he doesn’t need to worry about the space behind him, so convinced is he that the cover from Cork is within sight and the route through is blocked regardless.

In half-raising his arms and tilting his head back, he is displaying exasperation with himself as much as with his opponent: he’s upset that Pépé found the tiny window of opportunity but even angrier that he left it ajar.

It’s as if so many competing thoughts are entering his head at once – all the hows, whats and hows again – that it’s enough for his body to short-circuit to the point that the only possible reaction is a blend of performative pain and confused stasis.

Pépé let himself down a little bit later on by messing up counter-attack with an under-hit pass, but there seems little danger of end-product not following in due course.

After just a couple of cameo appearances, he is already showing he has no plans to hide away.

You can test the water by sitting on the side of the pool and dipping your feet in, or you can get on the diving board and clamour for everyone to watch your entrance. We can already tell Nicolas Pépé is ready to make a splash.