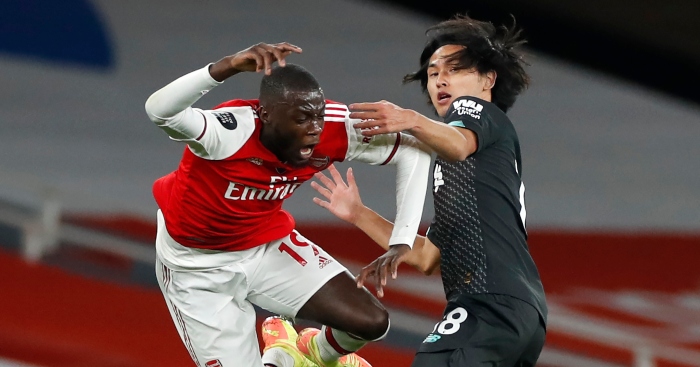 When you’ve been spending a game without all that much of the ball, logic dictates you should be careful when you do have it. Nicolas Pepe doesn’t obey these rules, though.

Arsenal’s victory over Liverpool wasn’t a dominant one: Mikel Arteta’s side scored with their first two shots and limited the champions to one goal from 30 of their own.

Pepe attempted just 11 passes in 90 minutes, with a success rate of barely 50% representing his lowest ever in a Premier League game, but even that didn’t stop him from doing what he does best.

It’s important to remember Nicolas Pepe isn’t on the pitch for the same reasons a normal footballer is there.

American football has its specialist place-kickers, but football’s equivalent of special teams applies to Nicolas Pepe and Nicolas Pepe alone. Well, maybe also that one time when Stuart Pearce threw David James up front, but that’s an outlier.

However, unlike the NFL equivalent, Pepe is the player you use when you decide means-to-an-end plays are the opposite of what you want. You call on him when, instead of getting from A to B, all that matters is getting from A, with little care or concern about the destination.

This is because, if you’re at the point where his only role is to support the team in a group effort, his powers are sapped. You need him there if only to offer a burst of freedom.

It’s not just fitting that Pepe’s run begins when a blocked Liverpool shot rebounds to him. It’s necessary.

No self-respecting team-mate would set him up to run at three Liverpool players from deep inside his own half, simply because it’s the kind of scenario which rarely ends well for anyone besides Liverpool.

While Liverpool’s dominance this season hasn’t primarily been built on their midfield, the sight of Fabinho bearing down on you would drive many to self-preservation long before entertaining any ideas of embarrassing others.

In Pepe’s case, of course, that’s only part one. Andy Robertson and Takumi Minamino also fall victim to his tricks, with a sense of “oh, I have to do this as well? Fine, if you’re asking nicely”.

Of course, the person asking nicely in this scenario is also Nicolas Pepe, inviting himself to a party when he already knows what the RSVP will look like.

Instead of acknowledging the lack of possession and seeking out an opponent to take some of the strain, he decides they’ve all worked hard enough already. Attack is always the best form of defence for Pepe, and he believes jabbing at the fleshy part of Liverpool’s pride can force them to take an extra second over decisions everywhere on the pitch.

It’s a classic case of using the most potent tools at your disposal, and it’s the same energy the Ivorian showed earlier in the season when he embarrassed Burnley’s Ben Mee: if you actively refuse to be intimidated by any opponent, you don’t think twice about strolling through the challenges of one title-winner after another.

Watch out when Nico's about…

After a season in which barely any opponent has caused them even the slightest of problems, his embarrassment of three men in a row almost feels like an affront to Liverpool’s dominance. In this situation, merely dispossessing him isn’t enough – it’s almost essential to bring him down, if only as a deterrent to anything close to a repeat attempt.

Their only mistake here is assuming anything can deter Nicolas Pepe. If he’s doing this on the quiet nights, there’s no limit to what he’ll do when brimming with confidence.

Liverpool should already be making plans for the next time they come up against Pepe, because there’s no chance of him remembering being taken down and taking it as a warning shot for the next time. And there’s always a next time if you don’t let anything slow you down.

The Reds can only be grateful Pepe began the run deep inside his own half, ensuring the eventual, inevitable foul wasn’t committed in a more dangerous position for their defensive line.

He’ll be back, of course, and he’ll be back in far more worrying parts of the pitch. The problem for defenders is thinking their task can become any more manageable when the stakes are higher.