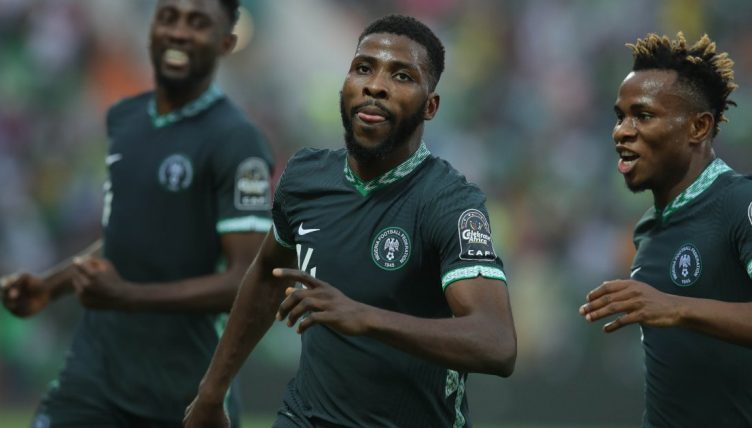 Immediately as Joe Aribo’s header found Kelechi Iheanacho in a promising position inside the area, you sort of knew what was coming.

What ensued was right out of the top drawer, and utterly emblematic of the Leicester City frontman.

It was a worthy strike to win any game and you reckon Egypt’s teeming fans at the Roumde Adjia Stadium in Garoua may still be having flashbacks.

Aside from the brilliance of the strike that sealed Nigeria’s 1-0 success, the journey leading up to Tuesday’s brilliance emphasised why his goal meant so much.

Less than three years back, Iheanacho’s Super Eagles career was neither here nor there. Criticised by then-manager Gernot Rohr for his attitude and professionalism, the frontman was dropped for an Africa Cup of Nations qualifier against Seychelles in March 2019.

On the periphery at Leicester at the time and unwanted by the Franco-German coach Rohr, very little changed in the months that followed and the ex-Manchester City forward was cut from final squad for AFCON 2019.

Many Nigerians wondered if there was a way back for the striker who scored only one Premier League goal in 30 appearances in the 2018-19 season, albeit from a paltry nine starts.

Fast forward two years and a bit and ‘Seniorman’ was the match-winner against the seven-time winners of the competition on his tournament debut.

The goal was typical of the 25-year-old, who has made it a habit of scoring from nothing or frequently profiting from half-chances. As the move preceding the goal developed, Iheanacho occupied his favoured inside-right channel before advancing into a more central position in the penalty area.

His movement after Moses Simon’s cross was half-cleared by Ahmed Hegazi, though, was striking.

Good forwards find space amid the cluster of bodies in the 18-yard box and, sensing Aribo had a high chance of winning the header, Iheanacho escaped from Mahmoud Hamdi and Ahmed Fatouh, the centre-back and left-back respectively.

Aided by finding half a yard in the area, he needed only two touches: the first to control the Rangers midfielder’s header and the second to send a half-volley into the top right corner, despite minimal backlift.

It was no fluke and the Nigerian has shown particularly in a goal-laden period since February 2021 an underrated ability to convert low-percentage efforts.

Several goals in the last year have epitomised this quality.

A strike from around 25 yards to complete a hat-trick in the 5-0 win over Sheffield United, a powerful drive from outside the box in the Foxes’ 3-2 defeat by West Ham United, the stunning 80th-minute winning goal in the comeback win over Crystal Palace and a consolation strike in Leicester’s 4-2 loss against Newcastle United.

Then there was the magnificently well-taken volley in a 1-1 draw at Burnley in March last year where he connected beautifully with Wilfred Ndidi’s through-ball.

While significantly reduced game time has meant those moments have been infrequent this season, his opening goal in Nigeria’s 2-0 victory over Liberia in September 2021 was proof of a continued willingness to catch goalkeepers flat-footed.

The last time the Super Eagles played Liberia, a Kelechi Iheanacho first-half brace was enough to give Nigeria a deserved win in Lagos.

Who's going to be the hero in the reverse fixture today?#LBRNGApic.twitter.com/xzNVy0UvyO

Be that as it may, the striker’s proclivity to shoot can be maddening for a fan or neutral when it goes awry.

Just after the hour mark in the 1-0 win over Egypt, he opted to let fly from 30 yards when passing to Simon — who would have backed himself in a one-v-one against right-back Mohamed Abdelmoneim — was the better call.

Moments later, in the 66th minute, the frontman chose to shoot from a tight angle after a quick free-kick slipped him through in an unusual position in the inside-left channel. Unsurprisingly, Samuel Chukwueze was not pleased the frontman opted against a cut-back to better-placed team-mates.

It would be forgetful to fail to mention that effort in Nigeria’s 1-0 defeat by the Central African Republic in October. He drove forward in possession in his favoured position in the right half-space and characteristically shot from long range after chopping onto his stronger right foot, injuring himself in the process.

When it goes badly wrong, you are inclined to censure his decision-making. But when it comes off, as it did in Tuesday’s win over Egypt, you are left in awe of the Super Eagle.

Indeed, the goal against Egypt encapsulates the whole Iheanacho experience.