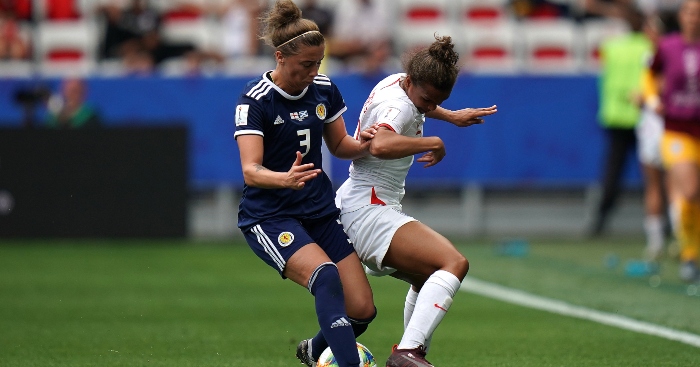 When the draw was made for the Women’s World Cup group stages, Scotland knew they wouldn’t have it easy.

Shelley Kerr’s team found themselves up against two of the eight best teams in the world in England and Japan, hardly the reward they’d have wanted for winning seven of their eight qualifying games to reach their first World Cup.

There’s plenty of talent in the squad, and friendly victories over Brazil and Jamaica will have given them confidence, but England ultimately withstood a late fightback to win their opener 2-1.

It was an improvement on Scotland’s last meeting with their neighbours, a humbling 6-0 defeat at Euro 2017, but that won’t be much consolation if it prevents them from reaching the knockout stages.

More importantly, though, the game saw a moment of real quality from England’s Nikita Parris, a little while after the newly-arrived Lyon forward had opened the scoring from the penalty spot.

Having seen a team-mate pull off a nutmeg pass by the corner flag, Parris ran onto a low ball down the line, spotted defender Nicola Docherty approaching, and did this…

Docherty is present for the nutmeg, but her reaction is one of a woman operating on little more than muscle memory.

She turns around because she knows the ball is no longer in front of her, but to call it a reaction feels generous. She is operating in Parris’ world, which resembles the world she left when she stepped onto the pitch at the Allianz Riviera but lacks any aspect of control.

It’s akin to seeing a familiar environment within a dream. Your mind tells you where you are and how things work there, but your surroundings have control over you, rather than the other way around.

In this case, those surroundings are enclosed within the couple of square feet housing Parris’ boot and the World Cup ball.

Docherty’s movements are almost automatic, borne out of what her mind has gleaned through years of repetition, but to imply she is the only one leading this journey feels misleading.

The subtlety with which the England player touches the ball around the corner presents a more worrying thought: that she knew exactly what to expect.

Parris has already had a frankly ridiculous year for someone who didn’t make her international debut until 2016, finishing the WSL season as the highest-scoring English player by some distance after 19 goals in as many games, and the touch to beat Docherty felt like the action of someone for whom everything has been going right over the last few months.

She lets her opponent do much of the work, mentally mapping the defender’s path and allowing Scotland’s number three to form a gate through which the ball can enter like a skier passing through a slalom track.

If anything, we should give credit to Docherty, not just for chasing back but for carrying on for another half-hour rather than just retiring on the spot. At least the realisation waits until the instinct to retreat wears off, meaning the cameras are no longer on her at the point at which she realises she’s been well and truly schooled.

There’s no shame in recognising what has happened to you, realising the significance of it, and just stopping there and then in the knowledge that it can’t happen again if you just walk away. Parris is hardly going to get worse from here on out, and her ceiling doesn’t even bear thinking about.

The World Cup has already seen some high moments in its opening weekend, from the raw emotion of Italy’s late victory over Australia to the ferocity of Giulia Gwinn’s winner for Germany against China, but Parris has already shown star power like few others.

With more eyes on the tournament than in previous editions, there’s a sense that this Women’s World Cup can turn its top performers into household names who we’re still talking about long after the final whistle blows in Lyon on 7 July.

By producing a nutmeg on the turn to actually gain an advantage, rather than just for the sake of it, Parris was sending us the message that we should believe the hype. Had she pulled off the trick merely to show us she could, we would have had no complaints.