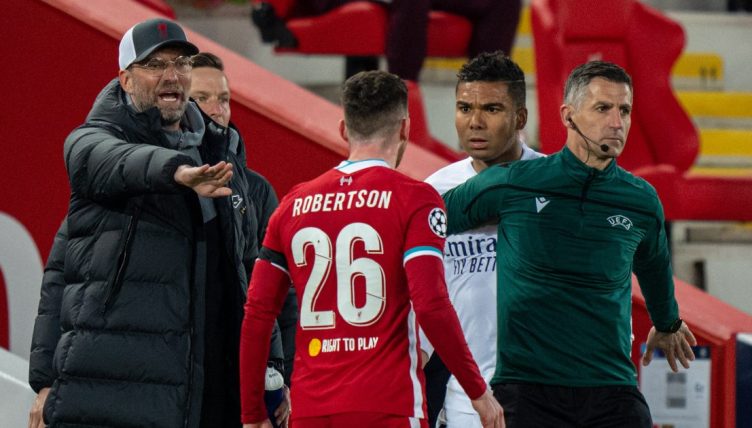 While goals win games and defences win titles, the all-consuming thirst for success helps build dynasties. With this in mind, it’s impossible to maintain success without having players willing to indulge in the dark arts.

Think Roy Keane and Patrick Vieira during the Premier League’s most intense rivalry or Manchester City’s penchant for tactical fouls.

Or Sergio Ramos. For all of Cristiano Ronaldo’s goals, Real Madrid would not have won anything without the ultimate shithouse in their line-up. Liverpool know this better than most – just ask Mohamed Salah, the recipient of some improvised judo in Kyiv three years ago.

When the draw was made for this year’s Champions League quarter-finals, Liverpool fans everywhere relished the chance for revenge. At least until Ramos contracted COVID-19.

Anybody fearing shithouse withdrawal symptoms need not have worried. During the second leg at Anfield, midfielder Casemiro stepped up and delivered a masterclass in the genre.

He captured the heart of Rio Ferdinand, who sang his praises on BT Sport: “Excellent footballer. He does all the graft, all the hard yards, all of the ugly stuff, but with a bit of quality as well.

“I’ve seen him live a good few times… today, even his passing was top draw. In tight situations, finding the spare man, but knowing where to be.

“The most tackles and most regains of the ball today on the pitch out of any player. A complete understanding of the defensive midfielder role in a football team.”

Madrid went into the game protecting a 3-1 advantage from last week’s first leg. While the absence of supporters made L4 a slightly less intimidating venue, the visitor’s team bus was left with a welcome gift of a smashed window.

The stage was set for an absorbing European night under the floodlights. And Casemiro gave the occasion some added Brazilian spice.

His spidey senses were tingling from the second minute. James Milner and Karim Benzema, two footballers who came to prominence during the era of the Nintendo Wii, contested an early 50-50 and Milner caught the Frenchman’s ankle.

Benzema was left hobbling and Casemiro silently swore revenge. Like all the best things in life, time would make its execution sweeter.

But no worthy shithouse lets themselves become distracted by just one avenue for rule-bending. They’d have multiple methods of winding up the opposition.

After being caught by one of Fabinho’s telescopic legs, Casemiro saw his chance. Acting like a wronged dog after someone accidentally stands on its paw, the 29-year-old milked the moment in a glorious act of attention-seeking.

The blood of everybody associated with Liverpool was simmering away nicely. It boiled over merely seconds later. Milner chased an Andrew Robertson pass out of defence and looked set to continue a rapid Liverpool counter-attack.

Milner reckoned without Casemiro. Steaming into a tackle like a runaway locomotive, the Madrid man clattered into his opponent and left him in a crumpled heap on the floor.

Taking offence to the attempted amputation of his team-mate, Robertson came over to calmly discuss the matter in the traditional Glaswegian manner.

Casemiro’s shorts remained unsoiled. Standing his ground, his cherubic face looked the picture of feigned innocence while Jurgen Klopp seethed nearby. In the background, Zinedine Zidane was grinning like a bystander witnessing a fight in a pub car park.

After withstanding a barrage of Liverpool pressure in the first half, Madrid saw out the tie in relative comfort. They had proven the classier side over the two legs, defending with assured ease while taking their chances in the first leg.

Liverpool can have ultimately no complaints about their eliminations, no hard-luck stories to soften the blow of a trophyless season.

Casimero didn’t just shithouse his way through the game. His man-of-the-match display included four tackles, six clearances and two interceptions while providing Zidane’s team with balance and reassurance in the centre.

And with a display like this, he’s clearly next in line for the shithouse crown. We can only imagine how proud Ramos will be.

Watch: Asensio plucks ball out of the sky with Zidane-esque first touch