Aaron Ramsey has played for Arsenal during a frustrating period for the club. But he has still provided some great moments over the years.

It’s hard to judge the successes and failures of players who played under late-period Arsene Wenger.

Certainly, some individuals performed better than others. Few in the game could pull off Robin van Persie’s flying volley technique, for example. Few could be as classy as a fully fit Santi Cazorla.

In general, however, it’s hard to single out individuals for too much praise or criticism, since the Arsenal of the late Wenger years was very much a ‘team’ proposition — maybe more so than any of its rivals.

Arsenal succeeded as a unit and, every now and again, collapsed as one.

Over the years, it went both ways. On the positive side, there were the outstanding team goals that would have been beyond the capabilities of most sides.

Jack Wilshere’s intricate number against Norwich, for example, was ‘peak Arsenal’ in the non-pejorative sense. It was a goal of collective input, with each participant in the move as praiseworthy as the next.

On the other hand, few teams in recent times have been as willing to demonstrate their collective weaknesses.

Sure, individuals had their bad days. But when the team shipped 10 goals in two games against Bayern Munich, it made little sense to point fingers. It was simply an Arsenal thing to happen. The team, as a group, under that leadership, was more than capable of doing such a thing.

So how do you judge an individual when the team — so visibly covered in Wenger’s fingerprints — has such a strong personality in and of itself?

Among other factors, that conundrum makes it difficult to assess the 11-year career of Aaron Ramsey, once the golden boy of Wenger’s youth policy, today the club’s longest-serving player.

By factoring out the collective frustrations of Wengerism, however, the picture becomes a little clearer.

When Ramsey arrived at Arsenal in June 2008, he was 17 years old and had just one full season of football behind him.

Though not excessive, there was some hype around the Welshman’s £5million transfer, especially after Arsenal beat Manchester United to his signature.

Wenger was typically gushing: “He is still only 17 but has already shown that he is a very intelligent and mature player with great quality.”

The manager also called the new signing a “versatile player” who could “play across the defence”. 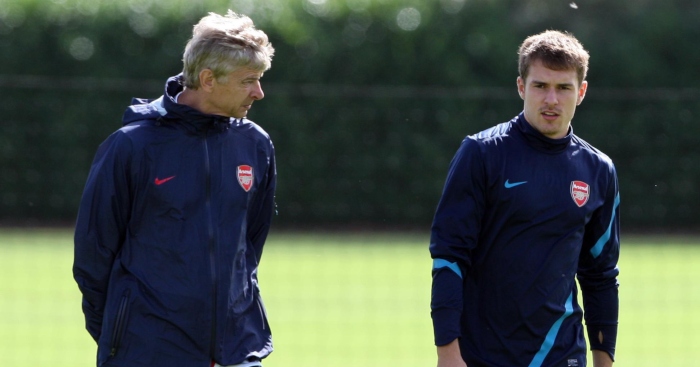 Mercifully, that theory wasn’t often put to the test.

In fact, Ramsey himself painted a different picture of his qualities. “I like to attack,” he explained. “I like to get forward and join the strikers when I can — I have always liked the way Steven Gerrard plays and I have tried to model myself on him and his game.”

Even Cesc Fabregas, who had previously been critical of Wenger’s reliance on youth, was encouraged by the quality of his new midfield team-mates.

“I will have to be better and better,” the Spaniard said. “This is great for me. I love competition.”

The other youngsters threatening to steal his place? Wilshere and Fran Merida.

Eleven years and three FA Cups later, it’s not altogether clear what we’re supposed to think of 28-year-old Ramsey, who will soon become the highest-paid British footballer ever.

Because for about four months of those 11 years, it looked like he really was Arsenal’s Steven Gerrard.

That was more than five years ago, at the start of the 2013-14 season, when the Welshman scored a ridiculous 13 goals in all competitions before December, putting Arsenal top of the Premier League in the process.

As if to validate the comparisons, Ramsey’s long-range screamer in a 2-0 win over Gerrard’s Liverpool was the best strike of the lot.

Of course, that run of form ended in typical Arsenal fashion. A thigh strain on Boxing Day ruled Ramsey out for three months; by the time he returned, Arsenal had suffered heavy defeats to Liverpool and Chelsea, dropped points against the likes of Stoke and Swansea, and fallen to fourth in the table.

Ramsey hasn’t been as prolific since, but nor has he had the chance to be.

Much has been written about Wenger’s failure to replace Gilberto Silva with a real defensive midfielder, and the Welshman, forced to pick up defensive duties, was as much a victim of that transfer policy as anyone.

He has, however, provided Arsenal with some brilliant memories. There were the FA Cup-winning goals, the multiple beauties against Norwich and, of course, the frankly unrealistic left-footer versus Galatasaray.

But there’s still a lingering feeling among some supporters that they’ve missed out on something even better.

In 2013-14, it genuinely looked as though Arsenal had a 20-goal-a-season midfielder on their hands. Had there been a modicum of balance to the squad, perhaps they would have.

Since the heady days of 2013-14, nobody has been quite as critical of Ramsey as Arsenal Fan TV, on which the soundbite-loving Troopz has repeatedly called the midfielder a ‘ham roll’.

So ubiquitous was the nickname at one point, members of the squad started using it.

“Is it a good thing or bad thing?” Ramsey wondered during a Sunday Times interview in 2017. “I haven’t a clue, but Rob Holding calls me ‘ham roll’ now.”

Calling Ramsey a ham roll doesn’t say anything specific about his footballing defects, but it does paint a picture of an oafish, hapless footballer.

Importantly though, that’s a picture that could be painted of virtually any Arsenal player of the era. Not flawed in any specific way, just a bit of a… ham roll.

And that’s the difficulty of trying to assess Ramsey, or anyone, who played under bad-period Wenger. At times, the whole squad seemed saddled with a common affliction. But that is surely more telling of the environment than the individual. Besides, if Ramsey was a disappointment, then what were Wilshere and Merida?

Ramsey celebrating with the armband. Why have I been robbed of the next five years of this?

It might be tempting to highlight Ramsey’s flaws as a reason to think of him as less than a brilliant Arsenal player. Truly, however, the only thing the midfielder did wrong in north London was fail, like those around him, to deliver a league title.

That might make him a ham roll in the eyes of Troopz, but it shouldn’t. Ramsey has been a brilliant servant to Arsenal, and with a few miles left in the tank, he now has the chance to prove himself in a very different environment.

We’ll miss him, but seeing how he gets on now will be truly exciting.