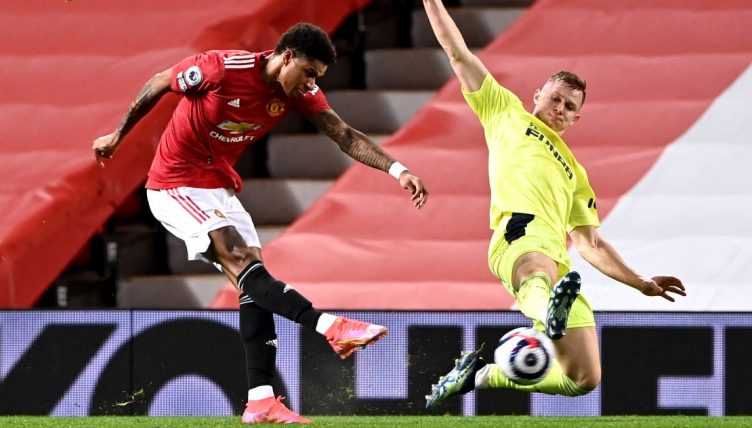 Last Friday, ex-Chelsea and France defender Frank Leboeuf was asked in his capacity as a pundit for ESPN what he thought of Manchester United‘s Marcus Rashford.

Leboeuf started positively: “What I want to say about Rashford… he’s a fantastic player. I didn’t want to play against those kinds of players because they go so fast, technically unbelievable.”

But a significant caveat followed: “The only thing with Rashford is he’s not a killer.”

For any forward, that is as backhanded as a compliment gets.

Yet given what had transpired the previous evening – and in the previous weeks, if we are to be frank – Leboeuf’s comments were pretty understandable.

United had played Real Sociedad and had eventually run out 4-0 winners at the Juventus Stadium. Rashford had scored one and played a part in the creation of the other three. But early on, with the score still 0-0, he had missed two gilt-edged opportunities.

Going into that Europa League tie with La Real, he was coming off a run of two goals in 13 games.

“You want to do nice things and it’s like you’re a bit easygoing, sloppy,” Leboeuf continued.

“But he has to become a killer. Because he has everything to become one of the best strikers in the world. He’s very close to that. He can score, I’m sure, double the goals he’s scored so far.”

If asked, Rashford would almost certainly tell you he takes no notice of comments from those on the outside. But on Sunday at Old Trafford against Newcastle, it felt very much like wanted to issue a crushing rebuttal to Leboeuf.

In the 30th minute, with his team dominating but failing to break through, Rashford picked the ball up on the left touchline.

Not a great deal looked on but the Manchester United No.10 saw a gap between his marker Emil Krafth and the covering centre-half. If he could get into it, he’d have a clear run at the penalty box.

The way he got there was brutal – a nutmeg so painfully simple and a burst of acceleration so blisteringly quick that Krafth was left stunned, grasping at thin air.

Rashford got into the box and paused, allowing Newcaslte’s Swedish full-back to get back goal side. But it was already too late. Krafth was on his heels and dizzy from being turned round so savagely.

The forward cut inside mercilessly and smashed a low, hard shot towards the near post, catching Karl Darlow unawares. After a poor run of league form, it was the goal United needed.

A lovely nutmeg to start an excellent individual goal! pic.twitter.com/w6sJ3R4HIw

As Rashford wheeled away to celebrate his 18th goal of the season, Krafth lay prostrate on the Old Trafford turf, probably thinking: “If that’s what a player with no killer instinct looks like, lord help me if I ever come up against one.”

Rashford’s reply was there, writ large on the scoreboard: Manchester United 1, Newcastle 0. Easygoing and sloppy it was not.

Newcastle equalised before the break, but Rashford showed the other side of his game in the second period, helping in the build-up for Daniel James’ goal and winning another penalty for Bruno Fernandes to put the game out of reach. It was a complete attacking display.

With that opener, the 23-year-old drew level with David Beckham for United goals on 85. Whilst Beckham took 394 games to reach that mark, Rashford has sped to it in 253 appearances.

Rashford of course plays further forward than Becks, but compare him with great United attackers of the modern era like Cristiano Ronaldo and Wayne Rooney, and Rashford’s stats still comfortably hold their own.

Off the pitch, Rashford might be angelic. But on it, there is no more Mr. Nice Guy. And if he keeps sharpening that cutting edge he showed against Steve Bruce’s Geordies, then the likes of Leboeuf might have to rethink their appraisals.