Mbappe? Pfft, we should be all worshipping Giroud’s insane overhead kick 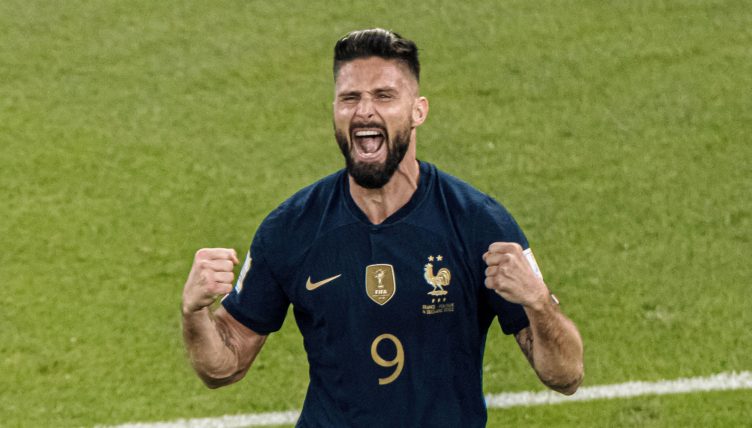 As befitting his status as the most level-headed man in the country, Gareth Southgate spoke wisely of the dangers facing England in their upcoming World Cup quarter-final against France.

Southgate, who’d just watched his side ease past Senegal, probably wouldn’t have watched France’s equally simple win over Poland but fans packed into pubs across England were left with jaws agape at Kylian Mbappe’s performance.

But the England manager, fielding questions about how he plans to tackle Saturday’s mouth-watering clash, chose to emphasise France’s collective strength.

“He [Mbappe] is of course a world-class player who has already delivered big moments in this tournament and in previous tournaments, but Griezmann is now over 70 consecutive games for France and he’s also a phenomenal player,” Southgate said.

“We know Olivier Giroud so well and they have outstanding young midfield players as well, so everywhere you look when you’re studying France, they have an incredible depth in each position so it’s a huge test but one we’re looking forward to and it’s a great challenge for our team now.”

Even then, Southgate somewhat overlooked Giroud. Everyone always overlooks Giroud.

Just as it looked like France were putting in one of their frequent bed-wetting performances at a major tournament, Giroud broke Polish resistance with a tidy finish from a neat turn.

The 36-year-old also became France’s record goalscorer in the process, overtaking a presumably disgruntled Thierry Henry. Not bad for a ‘go-kart’ striker who was playing second-tier football well into his 20s.

But Giroud, for such an unspectacular player, has always enjoyed a healthy penchant for the sublime – and that doesn’t include his coupon which is aging like the finest Bordeaux.

With France beginning to purr, a hopeful cross was dealt with unconvincingly by Wojciech Szczesny and nodded back into the penalty area by Adrien Rabiot. So far, so prosaic.

Giroud decided to elevate the mundane into something magical. Twisting his torso into the air, in the kind of movement that wins gold in Olympic gymnastics, the former Arsenal and Chelsea striker thwacked the ball into the unguarded goal.

Sadly, the killjoy referee had blown up for an infringement on the blushing Szczesny. It doesn’t matter; Giroud had already scored the most French goal conceivable and left his unfathomable critics awkwardly avoiding eye contact with the truth.

Should this 'goal' have stood? 🤔#BBCFootball #BBCWorldCup pic.twitter.com/FQ3piTcQZa

After the match, Giroud stated that with the France goalscoring record in the bag, his childhood dream has come true.

“The adventure continues. We had said in the dressing room that to live such a great experience we needed to be united, be as one,” Giroud said. “My wife and my kids are here, as well as my childhood friends, it’s a childhood dream come true to beat Titi [Henry].

“Now it’s done, I’m putting this behind me and my obsession is to go as far as possible with this team.”

We may have been denied the best goal of the World Cup to date but Giroud is playing with the confidence of a man fully comfortable in his own skin.

England should be wary; France are about more than Mbappe.

TRY A QUIZ: Can you name France’s XI from the ’98 World Cup final victory vs Brazil?