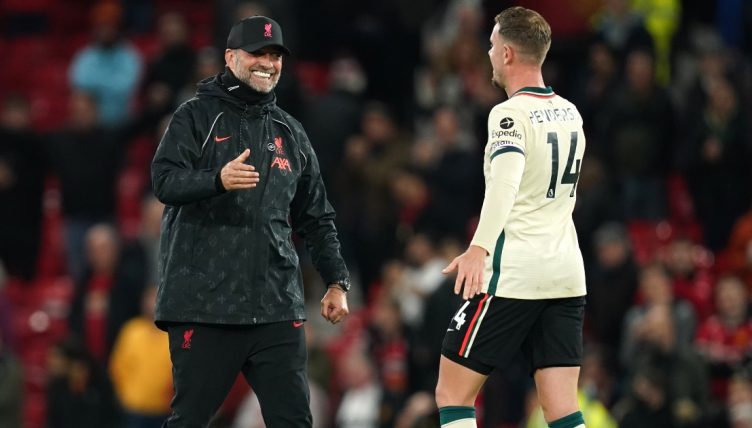 Many people thought Liverpool would beat Manchester United, but nobody quite foresaw the carnage that Jurgen Klopp’s side would inflict at Old Trafford.

In the end, Liverpool effectively declared at 5-0. As the United fans, those that remained in the stadium at least, howled with dismay at their side’s ineptitude, Liverpool took the role of a bemused onlooker witnessing someone else’s very public meltdown.

For the massed away supporters, Sunday’s match was one that will be told to the future grandchildren of Merseyside.

From Mohamed Salah’s efficiently taken hat-trick to the schadenfreude of Cristiano Ronaldo’s disallowed goal and the dark humour of Paul Pogba’s straight red, the highlights from the game will no doubt embellish the club’s rich tapestry.

And then there was Jordan Henderson.

Granted, his contribution may have been easy to overlook with all the metaphorical debris flying about the place. But Henderson ran the show at Old Trafford, a performance made all the more impressive by the absence of Fabinho.

The Liverpool captain took 144 touches, 31 more than any other player, without being dispossessed once. It helped that United were playing Lord Lucan in midfield, but focusing on their shortcomings would be to downplay Henderson’s role.

He also completed 128 passes – 43 more than any other player at Old Trafford. Again, some would say that number is an example of stat-padding following the dead period after Pogba’s red card.

But, when one of these passes was enough to dissect the United defence with the ease of a scientist dismembering a dead frog, that argument becomes moot.

Any suggestion Liverpool would ease up in the second half was extinguished the moment Henderson robbed Pogba and carried the ball into the United half.

After a quick glance, the 31-year-old unleashed a sublime ball with the outside of his foot that rendered Harry Maguire statuesque and released Salah to complete his treble.

Henderson would have been in secondary school when Kaka produced one of the best assists of all time in the 2005 Champions League final. To call this an imitation of that is perhaps the ultimate compliment for a midfielder.

After the game, Henderson told reporters: “Yeah it’s an amazing day. I’ve played at Old Trafford many a time and it’s a tough place to come, so we can’t really play down the performance if you like.

“But at the same time it’s only three points which we came for. It’s another game that we’ve won.”

Doesn’t that say it all? No Liverpool fan is fully confident before visiting Old Trafford, regardless of form or the ability of both sides.

Yet this wasn’t a watershed moment – according to their captain, it was just another game. Another three points. If Liverpool are to regain their crown, there’ll be plenty of tougher propositions than United along the way.

Henderson may not produce Kaka-esque assists for the rest of the season. If anything, his overall performance in midfield was more impressive than his role in Salah’s third.

But the sight of the Liverpool captain laying on the perfect pass to complete the perfect afternoon was symbolic of a glorious day in Liverpool’s history.