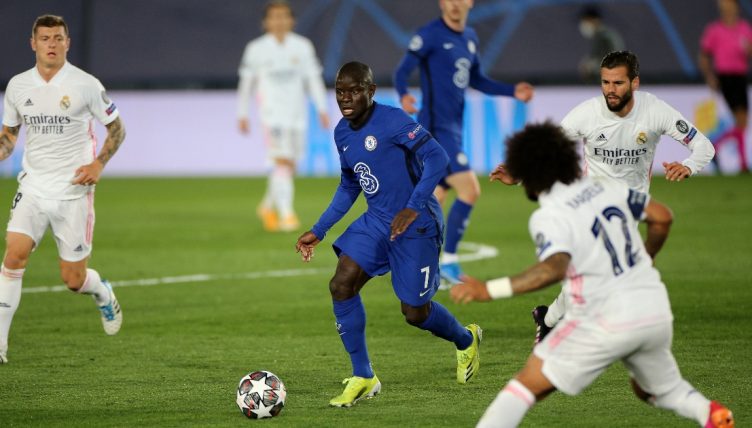 Two individuals, one on either side, stood out in Real Madrid‘s 1-1 draw with Chelsea: N’Golo Kante and Karim Benzema.

Kante helped set the tempo for Chelsea, who won the midfield battle and can feel a little disappointed they don’t take a lead back to London for the second leg of their Champions League semi-final, while Benzema’s brutal efficiency in front of goal kept Real well alive in the tie.

French football legends Arsene Wenger and Marcel Desailly were on punditry duty for beIN Sports to watch two of their compatriots put on a show in biblical conditions in the Spanish capital.

“In the last 25 years, the Champions League has become more and more predictable,” Wenger said when discussing the shelved Super League in the build-up.

He’s got a point: some teams and players have dominated the competition in recent years. It felt downright weird to get to the quarter-finals without Lionel Messi or Cristiano Ronaldo this season.

So it was no surprise to see Benzema turn up for the big occasion, but it was a joy to see 30-year-old Kante, playing in his first Champions League semi-final, make the game his own while up against Real’s epoch-defining midfield trio.

N’golo has always been a big game player. Never doubt him. He plays for 2.

In the last round, Liverpool exited the Champions League thanks an uncharacteristically lethargic performance away to Real in the first leg. Kroos and Modric were given too much respect, afforded the time and space to ping the ball about the Valdebebas pitch, which proved Liverpool’s undoing.

Kante made no such mistake, on them like a hound with the scarcely believable energy he’s made his calling card.

There’s a certain type of elegant midfielder whereby “glide” seems to be the only way to describe how they moved about the pitch. David Silva, Andres Iniesta, Zidane. Modric certainly has it.

It’s not a word you’d ever use for Kante, who exists in his own distinct category with his own set of verbs. Kante doesn’t glide, he buzzes; he fizzes, bustles, scurries, scuttles.

When the Chelsea midfielder is at the top of his game, as he was against Real, there’s a unique thrill in witnessing such an industrious worker. Like an army of ants in the form of one 5’6″ Frenchman.

Modric, 35, has rolled back the years this season, once again a standout performer in Real’s strong challenge for a La Liga and Champions League Double. But he was made to look his age when pressed by Kante.

As Chelsea bossed the first half, your television screen looked like it was in some kind of digital timeslip; two teams playing at different speeds.

While Kante made a nuisance of himself off the ball, it wasn’t his work out of possession that stood out against Madrid. Mason Mount made more tackles and interceptions, for example.

Zidane’s men couldn’t deal with Kante when he picked up the ball and decided to go at them. It seemed like every time there was a loose ball he was on hand to sweep up. He registered six dribbles, more than the hosts combined, with the kind of display Eden Hazard would have been proud of. Time and again he rode challenges, drove into space and created openings.

There can be no doubting the midfielder’s greatness. The darling of France’s 2018 World Cup win, an essential cog in Leicester’s miracle title win, the PFA Player of the Year when Chelsea last won the Premier League.

Partly thanks to Chelsea’s up-and-down nature, we’ve been robbed of seeing Kante often enough on the biggest European stage. He demonstrated he’s just as worthy as any of the modern greats – as Modric, Kroos and Casemiro will now attest.