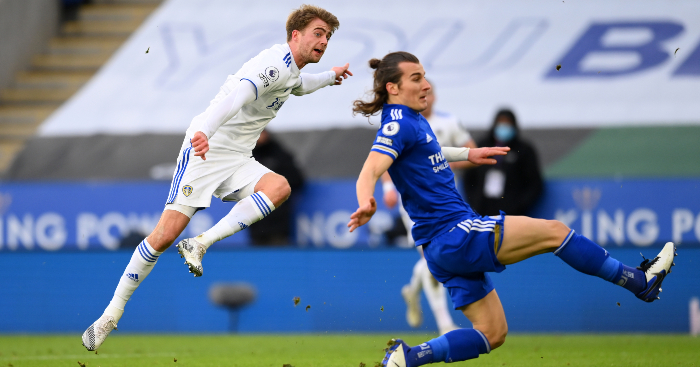 If you play Fantasy Premier League, you’ll always have a bit of extra fondness for those special players that give you an edge. For Leeds United‘s Patrick Bamford, that player is himself.

Such is the phenomenal popularity of the game, plenty of players that actually have the power to make an impact indulge in it themselves, like a relatively harmless, wholesome version of insider trading.

Leighton Baines is once said to have been inspired to start registering more assists after getting a kick up the backside, having been told by his old Everton team-mate Leon Osman that he’d been taken out of his team.

Some particularly savvy Liverpool fans even clocked that something might have been up with Sadio Mane, well before the news of his knock was revealed with the teamsheet at West Ham, because Andy Robertson had transferred him out for Son Heung-min.

Bamford has often been described as a confidence player, which was borne out by his record in the Championship for Leeds, alternating purple patches with long goalscoring droughts. That can prove a conundrum when it comes to FPL – stick or twist?

Starting 2021 by drawing blanks in defeats to Tottenham and Brighton and being hooked on the hour mark after an off-day at Newcastle might have caused some consternation among those that know Leeds United’s No.9 well, not to mention the millions that have him in their team.

That concern may well have turned to alarm with the revelation that he’d not even backed himself as captain – meaning double points for the uninitiated – as he revealed in his post-match interview with the BBC.

When you score one and assist two, but took yourself out as your #FPL captain 😬

Fortunately, by the time he’d said that, the striker was basking in the glow of one of his best performances of the season in Leeds’ 3-1 win away at Leicester – and most crucially delivering the points with a goal and two assists.

Just ask N’Golo Kante, Fernandino or Wilfred Ndidi: points on Fantasy Premier League aren’t everything, but they’re a decent barometer of how goalscorers and creators are performing in any given season.

When it comes to forwards, it’s right there in the numbers. Only Harry Kane has clocked up more points than Bamford so far this season. In reality, too, there’s a strong argument that only England’s captain, who remarkably also looks the league’s best No.10 when dropping a bit deeper, has been a better centre-forward than the Leeds striker.

Only Kane, Salah and Son have scored more goals than Bamford so far this season, while there was a point deep into the season that he was challenging Robert Lewandowski for the most goals scored from open play in Europe’s top five leagues. Only one of his 11 so far has come from the penalty spot.

Twenty-seven years old and starting regularly in the Premier League for the first time in his career, he’s unlikely to have been at the top of Gareth Southgate’s list of priorities at the King Power, with the England manager probably keener to see how Kalvin Phillips performed in one of Leeds’ tougher tests, or how Harvey Barnes and James Maddison did for Leicester.

Barnes and Maddison linked up well with a canny one-two for the opener, opening up Leeds just as they did in the reverse fixture at Elland Road. But from there, Bamford put himself centre stage.

It can’t have escaped Southgate’s attention that this was a complete performance, a man-of-the-match display from a player that’s getting harder and harder to ignore.

Within two minutes of Leicester’s opener, Leeds were back on level terms, with Bamford dropping into a pocket of space, taking just one touch before he found Stuart Dallas on the overlap, the central midfielder (well, at least on the day) obliging with a cute finish across Kasper Schmeichel.

Leeds dominated from then on, forcing a number of good stops from the Foxes keeper before a switch to a back three at the break put the hosts back in control, leaving Bamford more isolated, feeding on scraps.

But he only needed one chance to put Leeds ahead, having found himself with a shooting opportunity after two first-time passes from Pascal Struijk and Raphinha so efficiently broke through the lines to find the striker.

Nobody that watched Bamford in the Championship would have described him as clinical, but this was the finish of an assassin, letting the ball roll across his body before unleashing it into the top corner, giving Schmeichel no chance.

🔥 How many Goal of the Season contenders is that now? pic.twitter.com/6eGCgOt00I

Leicester responded well, putting Marcelo Bielsa’s side under the cosh with a sustained spell of pressure, but once again it was Bamford stepping up to give his side breathing room, timing his run to perfection to stay onside in his own half, darting into the open green space to latch onto Mateusz Klich’s through ball.

With a quick glance to see who was with him, he squared it to give Jack Harrison a tap-in and put the game to bed, costing himself a point in FPL with an assist rather than a goal.

Scoring more while being considerably cheaper than stars like Roberto Firmino, Sergio Aguero and Timo Werner, Bamford has established himself as this season’s must-have fantasy player, with 47% of all players selecting him in their team.

This is a player that had previously scored one goal in 27 Premier League appearances across four different clubs. Now, with faith from his manager, and faith in himself, he is among the league’s very best players.

Bench him at your peril.

Where are they now? Leeds United’s last 17 January window signings