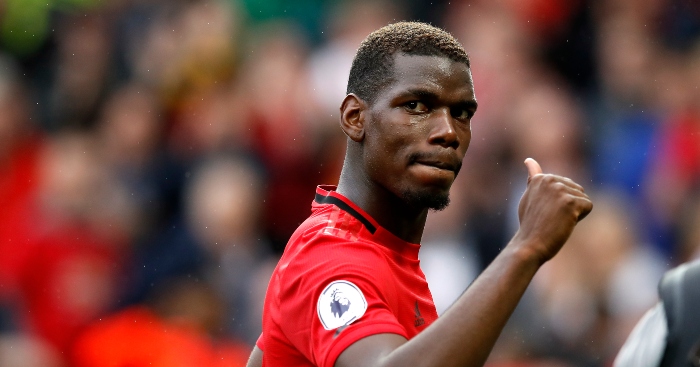 The departure of José Mourinho has ensured Paul Pogba went into the 2019-20 season as a focal point but not an absolute centre of attention at Manchester United – and he was all the better for it.

While the Frenchman’s links with Real Madrid have floated around the back pages during the summer, he’s had the luxury of entering a new campaign without his mere presence being an inescapable discussion point.

The talk ahead of United’s season opener concerned managers Ole Gunner Solskjær and Frank Lampard, and nothing could have provided a better backdrop as far as Pogba was concerned.

Amid the discussion of relative rookies locking horns in the respective dugouts, we saw more experienced players spooked by the occasion: Kurt Zouma got hopelessly caught up to concede a penalty before the break, while César Azpilicueta showed worrying signs of unreliability after years of the opposite.

All this meant was the players in red – once they had ridden the storm in which Lampard’s side twice hit the woodwork – could thrive by doing the simple things well, freeing them up later to make the difficult look simple.

United’s third goal was the perfect example of this: what looks like a straightforward counter, over before you can even blink, required the utmost precision – both from Marcus Rashford with his take and finish, and from Pogba with the assist.

When you’re playing football as a kid, you’re regularly discouraged from sitting back and admiring your passes. But it would feel rude to say the same to Pogba in this situation.

It’s the sort of pass that’s made to be admired, and to feign a focused effort to follow the ball would be to do it a disservice.

It’s the sort of pass you take out for dinner, showing up in your best tux, before holding its hand on the walk to the cinema to put your arm around its shoulders as it watches itself on the big screen.

The problem some people have with Pogba is he knows exactly how good he is. He knows, as he jogs off while watching Rashford bring the ball down and put away the chance, that he is the one who has made it possible.

He knows, too, that he would be much better conserved saving his energy than sprinting downfield in the event of a chance to contribute further to the move: he trusts Rashford to finish the move off alone because he knows how good his team-mate is but also because he knows how easy his own quality has made things.

With the energy he has conserved, he covers 70 yards in the blink of an eye to lay on United’s fourth for Daniel James.

There’s an ease to Pogba’s movement, and while it’s hinted at in the floated pass for the third goal, the way in which he glides forward for the fourth brings it into full focus.

The midfielder moves like a downhill skier, covering ground so smoothly you barely notice his feet leave the ground as he moves from A to B. It’s hard to appreciate the difficulty for anyone else to do the same until you acknowledge the difficulty Azpilicueta has in even getting near his opponent.

The Chelsea captain goes from control to panic in a split second, as Pogba moves with such smoothness that it’s impossible to think of him as having momentum.

Missing this part is Azpilicueta’s first mistake. His second is failing to appreciate Pogba’s decision to slow down is made for a good reason.

By this point, the Spaniard is reliant on James fluffling his lines: that nearly happens, but to simply find yourself in that position to begin with means something has gone wrong. For it to happen seconds after having United pegged back by their own corner flag tells you how dangerous Pogba can be.

We know how good a player Paul Pogba can be – that was evident at the World Cup in 2018, and in Solskjær’s first few games in charge of United – but whenever we’ve had a few weeks or months without seeing the Frenchman at his best, a return to form always comes as a very pleasant reminder.

When Paul Pogba is in this kind of form, he’s both at once. That 4-0 defeat to Antonio Conte’s Chelsea, where an anonymous Pogba was written off entirely by some, feels ever so far away.