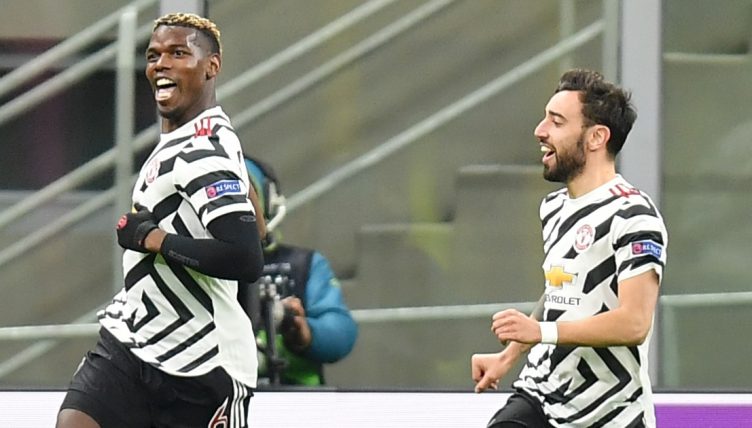 Paul Pogba’s ice-cool finish against Milan was brilliant — and a reminder of what Manchester United’s season could have been.

United fans who think Mino Raiola ruined their season are kidding themselves.

Sure, when Pogba’s agent said — right before United played their crucial Champions League match against Leipzig — that it would be “the best solution” if United sold the Frenchman in January, it wasn’t exactly helpful.

United, without Pogba in the starting XI, conceded three early goals and weren’t able to turn things around. But was an agent’s mischief the principal reason? Probably not.

“The opinion was a very simple one,” Raiola said in February. “I don’t think it destabilised anybody because they had a fantastic run. They were first in the league for a period, so that’s all bullshit.”

Straw-clutchers may have blamed Pogba for that group-stage exit in December, but the midfielder last night went from scapegoat to plain old GOAT.

Just like in the first leg, it was a half-time substitution from Ole Gunnar Solskjaer that made an immediate difference. This time, however, the manager didn’t need to call upon the wildcard of Amad Diallo, because had one of his best and most senior figures ready to join the action.

In less than three minutes, Pogba showed composure to waggle his foot at the ball before striking it at just the right moment — and into just the right portion of the net.

It was a simple goal and a close-range one, but it’s hard to imagine another player in black and white zigzags executing it so calmly.

Fred and Bruno Fernandes each had a chance to score during the goalmouth scramble, and you wonder whether the likes of Marcus Rashford and Anthony Martial — neither of whom have excelled in the poaching department this season — would have seized on the opportunity as Pogba did.

He almost doubled his tally in the 88th minute, leaping brilliantly above opponent-cum-team-mate Diogo Dalot but nodding his header over the bar.

Ease him back into the team? Pogba looked sharper than anyone around him.

Beyond the palpable goal threat, United looked far more comfortable with the Frenchman on the pitch, with both Fred and Scott McTominay improving after the break. Dean Henderson and Victor Lindelof may have got the team out of a few sticky situations, but the overall performance level increased massively in the second half.

“We’ve missed Paul,” Solskjaer told BT Sport after the game. “He’s been out for almost two months and any team would miss a player like Pogba. He is very important for us and he’s going to give us a big boost. He makes a very, very big difference to us.”

If Pogba can stay both happy and injury-free, he could be the driving force behind a serious push for the Europa League. All potential opponents look beatable.

There were, however, bittersweet elements to Pogba lighting up the San Siro last night. His return could still have a big impact on United’s season, but the wounds of his six-week absence can’t be healed — something only highlighted by his excellence against Milan.

When Pogba went off injured in the 39th minute against Everton on 6 February, United were 1-0 up and within three points of Man City.

They somehow lost control of that match to draw 3-3, and Man City — possibly inspired by United’s collapse, possibly just really good — hammered Liverpool to widen the gap. Pogba now returns to a team looking down rather than up, a full 14 points behind Pep Guardiola’s side.

It’s very unlikely that United would have won the league even with a fit Pogba, but they may well have given us something resembling a title race.

🗣 "Any team would miss a player like Paul Pogba, he's very important for us."

Another regret, albeit a less important one, is that last night didn’t provide us with a nice close-up shot of a few jubilant away fans wearing that absurd zebra kit after Pogba scored.

Just like in 2019, when they beat PSG dressed in salmon pink, United have enjoyed a great European night effectively wearing fancy dress, yet this particular show-stopping outfit will probably never be worn on the terraces.

That being said, if Bruno Fernandes jumping on Pogba’s back as they celebrated on the touchline is the last meaningful image we see of the ‘dazzle’ jersey, it will be a fine way to remember it.

Dare we say it, it might be one of our last images of Pogba too. With no news on a new contract, the World Cup winner could still be angling for a summer transfer, and with United loathe to lose him for nothing, he may well get it.

With any luck, however, there could be a few more big moments in store between now and the end of the season.

A trip to Leicester in the FA Cup beckons, and when United travel to Tottenham on 11 April, Pogba — not a baller to fuck with — would surely relish the opportunity to get Jose Mourinho sacked again.