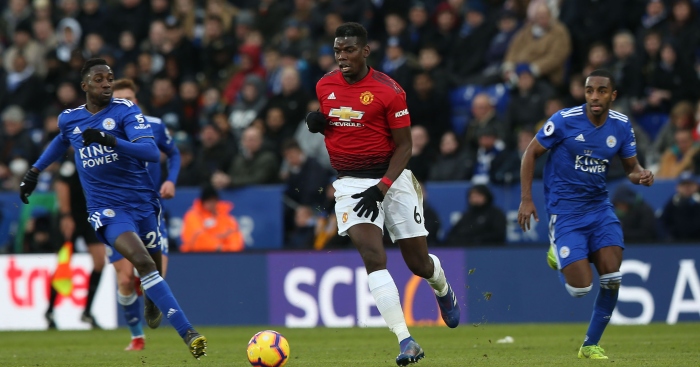 Manchester United’s turnaround under Ole Gunnar Solskjær has been well-documented, but sometimes it takes the numbers to give you an insight into just how dramatically players like Paul Pogba have stepped it up.

The club record signing was being left out towards the end of José Mourinho’s reign, but since the new interim boss has come in he’s started to look like the player people expected when United forked out £89million to bring him back from Juventus.

Pogba was averaging a goal or assist every 175 minutes in the league under Mourinho this season, beginning that run with a penalty against Leicester City in the opening game of the season. His through-ball for Marcus Rashford in the reverse fixture, however, kept him at one every 74 minutes under Solskjaer.

As with Pogba’s spot-kick on the opening day, some Leicester generosity played its part, but at the same time we saw something from him which others might not have tried or even wanted to try.

When the Frenchman sees Ricardo’s loose pass heading towards him, he needs to prepare his body to find a run which hasn’t even begun. There’s no question of keeping possession or of playing the pass before the final pass.

And then the execution. It’s the ball of a man who has the strings in his hands and doesn’t even need to pull them with force when he can get the same result by simply caressing them.

Being the orchestrator is second-nature to him, just as it has been ever since Solskjær came in. There might be bigger questions out there regarding whether he should have needed the switch-up, but we’re going to ignore them for now and just enjoy the positives.

The biggest difference between the Pogba of old and the player we’re seeing now is the return of his self-assuredness.

While some players will let their lack of confidence seep out through big misses, Pogba is sometimes notable in his failure to get in the position to miss, remaining safer and more withdrawn.

Not now, though, and there’s possibly no better example than Pogba’s second goal against Bournemouth just before the turn of the year.

The swagger of the celebration was one thing, but it’s worth noting it followed a run made with all the certainty of someone who feels he has scored before Ander Herrera even loops the ball into the box.

From the Bournemouth defenders to goalkeeper Asmir Begovic and even Pogba’s United team-mates, we’re dealing with a group of extras in a film of the Frenchman’s life.

In games as tight as their two victories over Leicester this season, we can see the importance of not just believing but being certain you’re going to win.

It might be little more than an in-form team riding a wave, as opposed to the kind of confidence on display when their current manager was playing under Alex Ferguson, but it nevertheless remains a healthy alternative to the period when a victory was met with a shrug rather than a smile.

When we discuss the impact Solskjær has had on his players, we look at the positivity in isolation without paying as much attention to what makes it possible.

Pogba’s penalty technique might have remained – a carry-over from the Mourinho era – but we also saw him attempting a bicycle kick in the win over Brighton, and an instinctive floated through-ball to seal victory at the King Power Stadium married that ambition with an end product that never seemed in doubt, either in his mind or Rashford’s.

The real test will arrive when United start losing games under Solskjær and need to battle back – as far-fetched as it looks right now, they will eventually lose games under the Norwegian.

That isn’t something to worry about now, though. For the time being, United fans will be in an unfamiliar position of deciding not to fear the worst. It feels alright, doesn’t it?

Nine of Marouane Fellaini’s most crucial goals for Manchester United