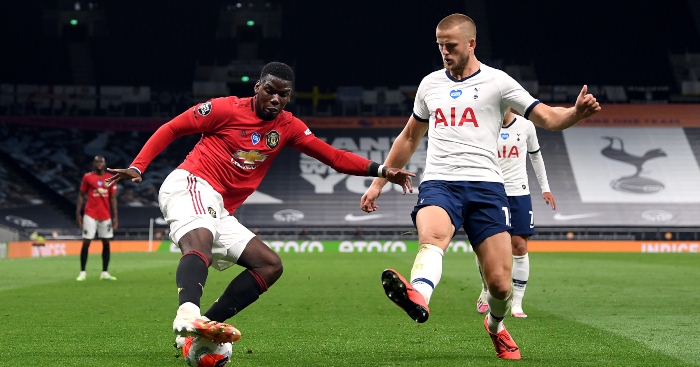 After several months on the sidelines, there was a fear from some that Paul Pogba might have been left behind by Manchester United. All it took to rubbish such an idea was having him return to the pitch and play like the rest of 2020 had never happened.

United had been in fine form without the Frenchman, picking up 11 points from their last five league games.

However, after falling behind to Tottenham when Steven Bergwijn struck in the first half, they needed saving for the first time in a long time. Pogba didn’t just do that, though – he showed us how what seems a challenge to most appears incredibly easy from his vantage point.

Pogba’s most direct impact in half an hour on the pitch was his role in the penalty which brought United level, gliding past Eric Dier and forcing the Spurs man into the kind of challenge which tells you the perpetrator has given up on anything more ambitious than ‘getting away with one’.

But it wasn’t that moment which served as the best reminder that we had the old Pogba back. That came with a pass from deep to find Marcus Rashford; the kind of ball which, while some others can pull it off, no one else can deliver with such calm certainty.

The benefit of Pogba’s languid movement is seen in the fact that he barely needs to break his stride to feed the ball through, continuing the half-step approach in a spot where others might over-rotate and lose the run of themselves.

It is thanks to this that he can essentially swing his boot as if casting out a fishing line, identifying his target and hitting it with such effortless accuracy as if to ask why top players can’t produce such balls with entirely unerring accuracy.

There are parallels with the iconic pass to Kylian Mbappé in the 2018 World Cup final, one of the undoubted high points of United-era Pogba, in the way he adds a knowing simplicity to something most couldn’t pull off when straining every sinew.

It’s only fair that these moments are relatively few and far between, if only to ensure others aren’t intimidated by the fear that they’ll never reach his level.

When we’re growing up and playing football as children, we’re often told by coaches we shouldn’t just be sitting back and admiring our passes. However, when it comes to the ball at the Tottenham Hotspur Stadium, even our strictest coach might have been willing to relax that rule.

It feels unfair for Pogba to have to leave his work for others to admire without enjoying the benefit of it himself, especially when he has a better view than anyone else could dream of.

We might even go one step further, inviting Pogba to hang his own pass in the Louvre so he has the opportunity to spot the intricacies even he was unable to witness the first time around as he bridged the gap between instinct and laser focus. You can even miss some of the deeper beauty within your own actions when you’re so firmly entrenched in the moment.

This one game won’t be enough to ascertain Paul Pogba is ‘back’ in any meaningful sense, though. After all, we were never in any serious doubt about the midfielder’s quality and application – it was his consistency in both regards that we were more concerned about, at least this season.

One thing does seem certain, though: the idea that Manchester United have evolved beyond the need for Paul Pogba seems wide of the mark, purely because no club can really consider itself above someone talented enough to pull out the kind of display he did in north London.