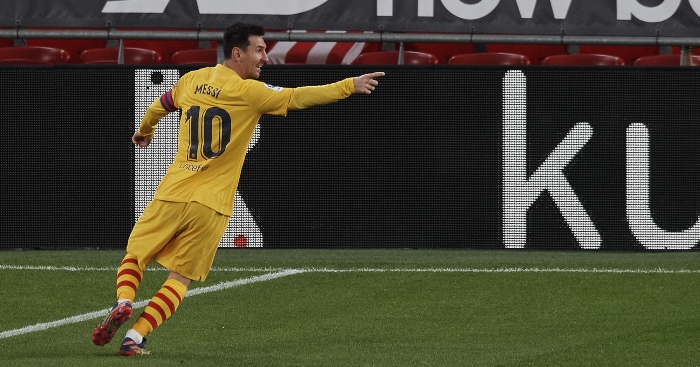 The blossoming of Lionel Messi and Pedri’s relationship at Barcelona proves that a 15-year age-gap should not be a barrier to a good working relationship.

By the time Pedri was born in November 2002, Messi was already part of Barca’s ‘Baby Dream Team’, considered the club’s greatest ever youth side. Playing alongside Cesc Fabregas and Gerard Pique, the teenage Messi notched 36 goals in the 2002-03 season and turned down a move to Arsenal.

Fast forward 17 years and Messi has become the quintessential Barca legend and arguably the greatest club footballer of all time. But his team have been in decline for a number of years, culminating in that 8-2 defeat to Bayern Munich and their worst start to a La Liga season since the 1980s.

With the Argentina international firmly in the autumn of his career and wanting out, things have looked bleak for Barca and their fans.

Enter Pedri. Since joining the club from Las Palmas last summer, the attacking midfielder’s form has been a beacon of light during a difficult season and the youngster has formed an exciting partnership with Messi.

As Barca desperately look to claw back leaders Atletico Madrid, the evident chemistry between the two players has become an important asset to Ronald Koeman’s side.

During their 3-2 win at Athletic Bilbao, always a tough place to go and get a result, the two combined for a majestic goal that indicated they’re definitely on the same wavelength.

Pedri is starting to build up quite the partnership with Messi 👀 pic.twitter.com/AIUrUgDtp5

The game was level at 1-1 when Messi collected the ball inside the Bilbao half and laid it off to Pedri.

Pedri took a touch, allowing the ball to travel inside and luring two defenders with him. Demonstrating telepathy not seen since Trent Alexander-Arnold and Divok Origi exchanged glances at Anfield in 2019, Messi continued his run on Pedri’s blindside.

This run was rewarded. Pedri executed a deliciously cheeky backheel that flummoxed the Bilbao defence and found Messi perfectly. Without breaking stride, the Barcelona captain stroked the ball home to give his team the lead.

Koeman has been under pressure this season, but the blossoming relationship between Messi and Pedri may yet kick-start Barcelona’s season.