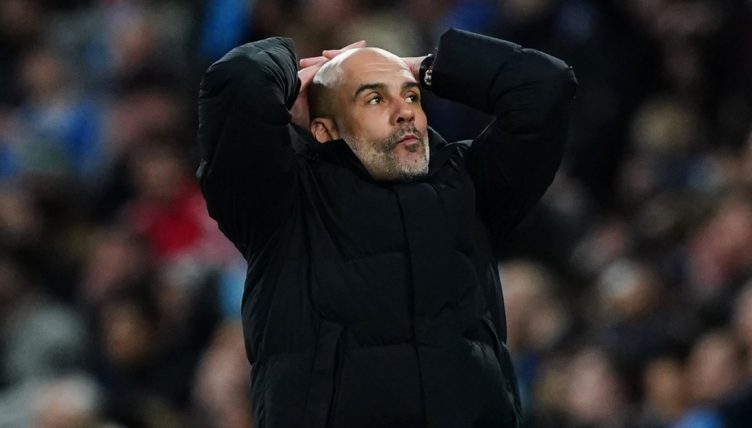 You’d be surprised if Guardiola has spent a great deal of time playing Resident Evil or watching Terminator 2 for the millionth time on ITV2.

The 51-year-old may not be a horror nerd, but if there’s one thing he does know it’s football. And he knows how the script goes with Real Madrid, football’s great unkillable monster.

As a Barcelona player, Guardiola faced Los Blancos 21 times. Next week’s clash at the Bernabeu with City will be the 21st time as a coach. He knows what it takes to kill them. But he also knows the price you pay if you fail to destroy them for good.

Guardiola’s men were playing 21st-century football. Ridiculously quick, ridiculously sophisticated, all in the image of their epoch-defining coach. The visitors couldn’t cope with the intensity and the interplay.

Real Madrid, in stark comparison, looked stone age. A side demonstrating all the flaws of Florentino Perez’s Galacticos policy. Eleven star individuals who didn’t look like they knew how to play as a team.

David Alaba is one of the most decorated defenders in the history of football but he looked like a ringer that Carlo Ancelotti had texted before kick-off to make up the numbers as he struggled to deal with Phil Foden, Gabriel Jesus and Riyad Mahrez buzzing around him as well as Kevin De Bruyne’s incision from midfield.

City deservedly went two goals up through De Bruyne and Gabriel Jesus. Time and again they cut through Madrid’s disorderly, frazzled-looking backline. They could have killed the tie right there and then.

The best chance for a third came in the 26th minute. More good work in midfield from De Bruyne and Bernardo Silva had them breaking towards Madrid’s backline with a three-on-one.

Mahrez was bearing down on goal and decided to shoot from an acute angle – firing into the side-netting – rather than square it for Phil Foden, who was crying out for a tap-in by the six-yard box.

Mahrez’s decision ran antithetical to the collective ethic that makes City arguably the best team in the world, and the approach that had seen them demolish Madrid in the opening stages.

Guardiola went absolutely apoplectic on the touchline. His side were producing some of the best football you’ll ever see in a high-pressure European knockout tie. But he knew what was about to happen. He knows Madrid. He might not be a horror nerd, but he still knows the script of every great slasher flick.

The top scorer in the Champions League this season – surely the best player in the world on current form, one who scored back-to-back hat-tricks against PSG and Chelsea – received the ball in the box at an awkward height but volleyed it past Ederson anyway.

The Expected Goals algorithm ranks that chance at 0.035xG – in other words, the Frenchman had a one in 29 chance of scoring it. It’s a goal that should never have been scored.

How many times across Madrid’s unprecedented four Champions League triumphs in four years between 2014 and 2018 were they outplayed and outclassed?

How many times did that matter, because Benzema or Luka Modric or Sergio Ramos or Cristiano Ronaldo or Gareth Bale pulled something ridiculous out of the bag to get them out of trouble? How many times do they somehow find a way thanks to their unrivalled will to win?

For how many minutes of their knockout victories over PSG and Chelsea were Ancelotti’s men ‘the better team’? And how little does that matter when they’re here in the semi-final, alive in the tie, potentially 90 minutes away from yet another final?

City responded well to the setback. They continued to dominate, producing some scintillating football, and twice they regained their two-goal advantage. But they were pegged back twice more. And now they go to the Bernabeu only one goal ahead, with everything remaining in the balance.

“We were one up but even two or three or four you have to perform. They have the ability to score three goals in 10 minutes,” Guardiola responded to the 4-3 victory in his post-match press conference.

Nobody knows Madrid’s monster mentality better than Guardiola. And next week he faces the daunting prospect of facing them in their own lair.

You should’ve killed them when you had the chance, Riyad.