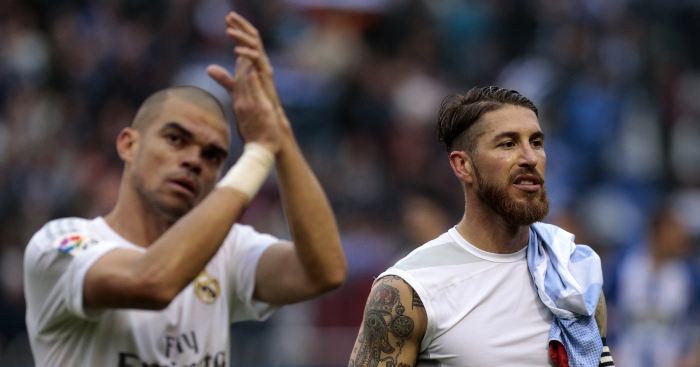 Before Sergio Ramos perfected the art of shithousery, Pepe warmed his throne up for him…and maybe stuck a whoopee cushion down there on the sly.

We’ve seen a bit of a sea change in recent years: winning at all costs has become a bigger part of the football narrative, and the dark arts of the game have started to become more appreciated or at least accepted as necessary evils on the path to glory.

In order to reach this point, though, we needed a trendsetter. Someone willing to step forward and absorb all of the hate before this behaviour became popular. Step forward Pepe.

When Pepe’s parents named him Kepler Laveran, after a leading astronomer and Nobel Prize-winning physician, it was probably with a view to him going down a noble path in the field of science.

He realised early on that you can’t ally this kind of name with aggressive physical football: either he’d need to go down the Socrates path, becoming a creator in order to live up to the image, or the name would have to be sacrificed.

After all, would Kepler Laveran do this? Well, maybe if he was using Francisco Casquero’s head and body as a scale model to map out the movement of the planets around the sun, but it seems unlikely.

While Pepe certainly limbered up during his early career in Portugal, his Real Madrid career – including moments like the above – brought his antics to a wider audience.

In the era of Clasico ubiquity, when fixtures between Real Madrid and Barcelona were the pinnacle of skilful and attacking football, he provided the balance we needed, be it overreacting to the challenges of Barca players or putting in a boot himself.

His red card in the 2011 semi-final first leg was notable, not just for ridding Jose Mourinho’s team of a full 11 v 11 battle, but by denying them – and us watching at home – the chance to see more of the Portugal centre-back in midfield.

A few minutes before his dismissal for a foul on Dani Alves, Pepe had completed an impressive multi-roll fall under a challenge from Javier Mascherano, bringing the Argentine a booking.

It was the product of years of brand-building, with Pepe presenting himself as someone so ruthlessly no-nonsense that he should be incapable of such theatrics; as if his body would violently reject any semblance of embellishment like a bad kidney. Imagine another half-hour of this…

When you speak to most people about Pepe, though, the moment which springs to mind didn’t occur in a Real Madrid shirt. Indeed, it wasn’t in a club shirt at all.

Before the 2014 World Cup, if someone told you a player had been sent off for headbutting a man who was sat down, you’d have had a lot of questions. If the same person told you that player was Pepe, you’d need them to say no more.

When we talk about footballers making the impossible possible, we tend to be referring to defiances of physics of pushing the human body to limits we once considered insurmountable. In Pepe’s case, though, it’s about attempting things no one else would be bold enough to even consider as options.

Of course, the highlight is not his headbutt on Thomas Muller but rather the reaction to the red card from referee Milorad Mazic. It’s the look of a man thinking, “Wait, they’re allowed to do that to me?”

It’s as if he’s been tricked into wearing what he thinks is a functional invisibility cloak and robbed a bank, only to be baffled by the idea that the authorities caught him in the act after all of that preparation.

Naturally, with someone so simultaneously reckless and in complete control, there was always going to be room for a postscript.

Just as fittingly, it came back in the shirt of Porto, the club where he first alerted himself to plenty of European fans.

After rejoining the Portuguese club in 2019, it would have been easy for the defender’s reputation to precede him. However, like all the best shithouses in the game, his brilliance often comes from denying the existence of the reputation, at least in front of those capable of acting on it.

During a Champions League match with Roma, Pepe went face-to-face with Edin Dzeko in the kind of situation which you’ll subconsciously find yourself watching from behind your hands. Not in a ‘this is embarrassing’ sense but rather a ‘someone might die’ sense.

Sure enough, Dzeko toppled to the ground, but there was no red card forthcoming. Had Kepler Laveran managed to manipulate science in his favour? Or had Pepe used the power of language to fell the striker?

Most referees would remind themselves of who they’re dealing with and jump to conclusions. However, Pepe was able to keep enough reasonable doubt to protect those conclusions from being drawn. That’s shithousery at its finest.

Pepe is already the wrong side of 35, and probably doesn’t have all that long left in the game – at least not at the top level.

What’s more, his former Real Madrid team-mate and de facto protege Ramos is getting on in years himself.

The next Pepe is probably already out there, winding up opponents and leaving his boot imprint on legs all across one of the world’s mid-level leagues.

Eventually he’ll step up and we’ll see him able to show off his talents on a bigger stage. However, when that happens, we’ll know Pepe walked so he could run.