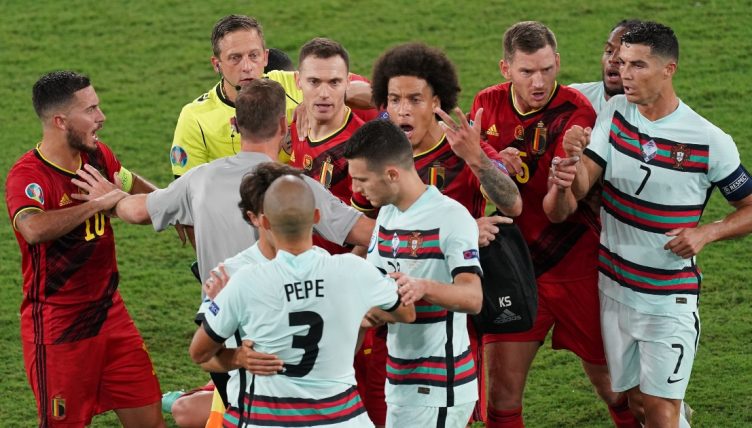 Everyone has their own personal criteria when watching an international tournament.

Firstly, you want your own team to win. Style can be sacrificed and anxiety can be forgiven if your country scavenges a 1-0 victory.

For all other matches, you want goals. Excitement. Quality. Something that makes the decision to base your day around Poland vs Slovakia worthwhile.

Failing that, you’d settle for a highly-regarded team collectively losing their shit as premature elimination stares them in the face.

This brings us nicely to Belgium against Portugal, a match many thought would become an instant European Championship classic.

What materialised instead was somehow even more fitting; a bitty, niggly game decided by a moment of Thorgan Hazard quality on an occasion drenched in thick and nervous tension.

It looked like becoming a match destined to have its own Wikipedia page for long periods, bringing back fond memories of the Battle of Nuremberg.

The reasons why are varied. It may have been the sticky conditions in Seville, the accumulated fatigue from a relentless season or the much-criticised pitch, but errors crept into both team’s play from the early minutes and put tempers dangerously on edge.

At which point, it would be a dereliction of duty not to mention Pepe.

In the 77th minute, ITV commentator Sam Matterface noted that he was “complaining about time-wasting”, causing an epidemic of split sides across Europe.

The 38-year-old may still be an elite defender, as his performance against Juventus in last season’s Champions League demonstrates, but he brings to mind Professor Snape with his commitment to the Dark Arts.

There’s never been a shirt Pepe’s not been tempted to pull, ankles that remain untapped nor a referee unexposed to his unique powers of persuasion.

And with Cristiano Ronaldo spending the match running through his repertoire of furious facial expressions, Portugal’s performance began to mirror their influential defender.

Eden Hazard was fouled as if every Portuguese player had a pre-arranged appointment to do so. Kevin De Bruyne was taken out of another big game. Worst of all, Portugal targeted the innocent spectators in the stadium with their wayward shooting.

Then, as the clock ticked down and the desperation rose, Pepe found the opportune moment to flick a lit match onto the assembled bonfire of emotion.

Romelu Lukaku, who had an excellent game selflessly running the channels for Belgium, fell down holding his head following a rogue challenge and the German referee Felix Brych stopped play.

The match-winner Hazard failed to hear the referee’s whistle, robbing Diogo Dalot of possession and continuing the game.

Having seen Brych gradually lose count of the number of challenges flying in, Pepe decided to take the law into his own hands.

As the Borussia Dortmund winger shimmied to go past him, the Porto defender administered his own dose of justice by smashing his forearm into the side of Hazard’s head.

The execution managed to be both terrible and hilarious in equal measures, like watching a cat falling out of a tree.

Naturally, the Belgium players gathered around Pepe to express their distaste in a polite and proper manner and definitely did not gobble up the bait that football’s master troll had left them.

Pepe received a yellow card for his troubles, but the beaming smile on his face upon its award suggested a man who had achieved exactly what he set out to do.

It was the culmination of an incredibly primal match, where two heavyweights of European football stood still and exchanged blows with each other – both figuratively and literally.

Portugal dominated possession and created some chances during an increasingly urgent second-half, but couldn’t break down the uncharacteristically solid backline constructed by Roberto Martinez.

There was time for Bruno Fernandes to blaze one final chance over before the referee blew his whistle. Ronaldo kicked his captain’s armband down the tunnel, while the Belgium players celebrated with a round of Coca-Colas.

Fernando Santos’ team may have contained more individual quality than the side that won Euro 2016, but their commitment to time-wasting, play-acting and steadfastly refusing to play to their strengths means they won’t be missed on an aesthetic level.

But Europe’s elite shithouses are unmissable viewing for the drama and controversy they bring to every international tournament.

And, in the absence of goals, we’ll take Pepe throwing a lit match onto a bonfire of a night every single time.