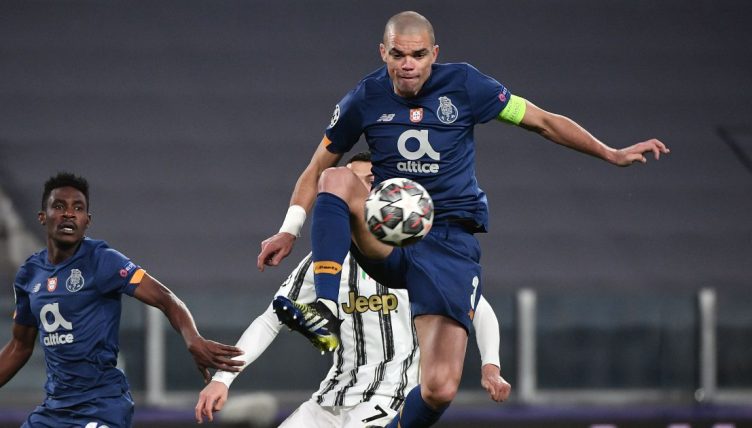 Most human beings, with that record behind them, that many games in their legs and that much money in their bank account, would have packed it in and gone to sit on a nice beach on the Algarve sipping a chilled Super Bock.

But for the exact same reason that it is Pepe and not most of us other mere mortals to have won all those shiny pots, the big, Brazil-born defender can’t let it go. He is a man hell-bent on winning, who will do or give anything in pursuit of glory.

Often throughout his long career, that has meant dabbling in the dark arts. Theatrical dives and dirty off-the-ball incidents have featured heavily in his back catalogue.

If you search his name on YouTube, one of the first videos that appears is called, ‘Pepe: The moment of a psycho’, and the first clip in it shows him donkey kicking a Celta Vigo player in a place no man wants to be donkey kicked.

Sometimes, though, those moments of viciousness and lack of scruples have served to cover up the other, more becoming side of his game. As well as being a superbastard, Pepe is a super defender. You don’t build up a medal collection like his without an incredible degree of commitment and skill.

On Tuesday night at the Juventus Stadium, as his side looked to progress pass their hosts and into the Champions League quarter-finals, 38-year-old Pepe was ready to demonstrate that more cultured side of his game to help his team across the line.

Trailing 3-2 and playing with 10 men with seconds to go, Porto were set to go through on away goals after a 2-1 win at the Dragao in the first leg.

Juve were desperate. A last-ditch ball was floated towards Merih Demiral, who had come up from the back.

The bell for last orders had already rung, and Demiral nodded the ball over the Porto defence towards Matthijs de Ligt. For a split second it looked like it might fall perfectly into his path.

But there was Pepe. Again. A long right leg stretched up and out as he threw himself to the ground to generate the angle and the power that would remove the ball from the danger zone.

Stoppage time after 120 minutes, down to 10 men, seconds from the Champions League quarter-finals…

What a flying clearance from Pepe at the age of 38! 👏 pic.twitter.com/Cbe8DFBSDH

It was enough. Porto were going through. And for Pepe it completed two hours of the most magnificent work – cajoling his Porto colleagues through the game, putting his body on the line and using every ounce of effort and intelligence to keep former team-mate Cristiano Ronaldo quiet.

That overhead kick was Pepe’s 18th clearance of the night – all of which were made inside his own area. He had also recovered the ball eight times, made two further tackles, blocked two shots and won both of his aerial duels.

It was the complete performance of a man who will do anything – and by that we mean the very worst of the game and the very best – to win. That Pepe was an injury doubt before the game only makes his commitment, concentration and quality all the more impressive.

“The team, when it plays this way,” Pepe told Portuguese TV post-match, “with this passion and this rigour, we are a very difficult team to beat. Even with one man fewer, the team was humble, getting back, compact.”

Through his own play, Pepe set that passionate and rigorous example for his younger colleagues to follow.

In England, BT pundits were singing his praises post match. Joe Cole called him “staggering”, adding with a smile that Pepe is “the most annoying player in world football over the last 20 years.”

Rio Ferdinand, a man well qualified to talk about commanding defensive displays, reached for the old ‘show the kids’ chestnut. “If I’m coaching at a football club now I’d get all these clips and give them to every young centre-half at the club,” he said.

Ferdinand’s comment might be a cliche, but we could all learn a bit from Pepe’s commitment to the cause.