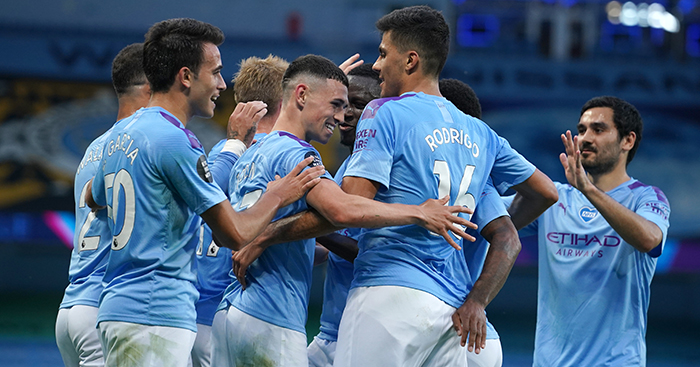 On top of his goal and assist against Liverpool, Manchester City’s Phil Foden had time to take an ironic dig at poor Tottenham Hotspur.

You could see Kevin De Bruyne getting ready to yell, his cheeks reddening by the second.

In the 35th minute of last night’s game, with City already beating Liverpool 1-0, Phil Foden had the perfect opportunity to set up his Belgian team-mate for a brace.

And to be fair to De Bruyne, he had sprinted from the left of his own half all the way to the right-hand side of Liverpool’s box.

When Foden ignored him, it looked very much like youthful naivety. Like something his captain would have every right to complain about. That’s a long distance to run just to be ignored by your 20-year-old colleague.

But where we saw immaturity, Foden saw through the eye of a needle.

Watch it a hundred times, and it still doesn’t seem possible for the midfielder to get the ball past Virgil van Dijk, Joe Gomez and Gini Wijnaldum through to Raheem Sterling on the left-hand side.

It’s simply the wrong option. Surely, surely he’s holding onto it too long.

Apparently not. Foden threaded the pass perfectly, before Sterling did his own bit of improbable skill by steering it through Gomez’s legs — the only way he could have got the ball into the net.

That was Sterling’s moment, of course, getting the better of his old enemy, but it set a precedent for Foden’s masterly display.

The youngster is gradually increasing his minutes under Guardiola, and he’s not going to waste any of them.

Over the course of the season, Foden has managed to balance his goal-making abilities with his goalscoring ones.

Before the Liverpool game he had seven assists and five goals in all competitions — not record-breaking stuff, but a good balance for a central attacking midfielder.

So it felt natural when, just 10 minutes after that ball to Sterling, Foden got on the end of an equally brilliant pass.

He made it happen, too.

Receiving the ball 25 yards out, Foden played a one-two with Rodri before an incredibly cute ball to De Bruyne — somehow making Andy Roberston disappear in the process.

Fortunately, KDB doesn’t hold grudges, and the Belgian wasn’t going to whack it out wide to Sterling just to be an arse.

Instead, the 29-year-old played an equally cute reverse into Foden’s path, evading Virgil van Dijk as though the Dutchman was participating via Zoom.

On his weaker foot, Foden thwacked it over Allison and into the net.

If Foden was already the next David Silva, he’s making a case for being the next Sergio Aguero as well.

This was his best goal yet. His opener against Burnley was brilliant, but the sharpness here, not to mention the telepathy with De Bruyne, was something else.

If City can get these performances out of Foden even just half the time next season, they’ll be a force to be reckoned with once again.

But how could the young prodigy better that lovely assist and excellent goal? With a last-ditch tackle, maybe? A goal-line clearance? Volunteering to pull on the gloves after an Ederson red card?

Foden might be young, but he had a much more sophisticated plan in mind.

Last season, City were hard done by in the Champions League. In their quarter-final with Tottenham, VAR played a big part, awarding Spurs a semi-controversial goal and disallowing one for City right at the death.

Technology effectively dumped them out of Europe. Foden wasn’t in the squad that night, but the defeat would have stung.

How funny then, that VAR would deny Harry Kane a perfectly legal-looking goal in their bout with Sheffield United.

The offence? Lucas Moura, having been chopped down by several Blades in unison, got the ball booted at him as the fell to the floor.

It maybe hit his arm, a bit.

Thanks to our weird new footballing laws, it was classed as a not-deliberate-but-still-illegal handball, and Kane’s goal was ruled out.

And there’s Foden, probably still on the bus on the way to the Etihad, absolutely loving it.

So in the 94th minute of the Liverpool match, Foden pulled out his party trick. The subtlest bit of banter you’ll ever see. The most caustic send-up of a downtrodden rival this side of Project Restart.

Receiving a short pass from Riyad Mahrez, Foden got himself fouled by Fabinho. Nothing unusual there. Tired legs. Midfielders playing at centre-back.

Mahrez took the ball back, raced away, and hit a beautiful solo goal in at the near post. 5-0.

But Foden knew what he’d done.

As he collapsed to the turf under Fabinho’s challenge, the wonderkid grazed the ball with his arm. Ever so gently, ever so secretly.

A perfect satire of Lucas Moura. A dagger to the heart of Spurs fans. A crushing humiliation from a player only recently out of his teenage years. The goal would be ruled out, sarcastically, by VAR.