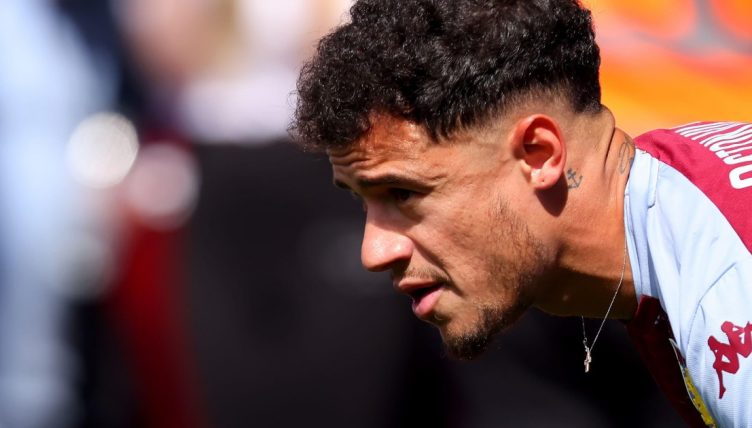 Under the floodlights in one of England’s most under-appreciated stadiums, Philippe Coutinho and Liverpool crossed paths once more when Aston Villa took on the Premier League title hopefuls on Tuesday night.

The first time Liverpool and Coutinho met he was a young 20-year-old cast-off, sent packing by Inter Milan and costing the Reds no more than £8.5million.

Next to nothing was expected of him, and yet the following seasons saw him flourish into one of the most celebrated players in the recent history of the English top flight.

The Brazilian was box-office entertainment, pure samba soul unleashed upon the pitches of England in a loveable bite-size package topped with a mess of dark curly hair.

And then, everything changed. His big-money move to Barcelona meant rigid passing systems, the eyes of the world being on him and (worst of all) pressure.

But back in England, Coutinho has been freed from the shackles that bound him. He is free to nutmeg who he wants and try the outrageously cheeky.

After all, that’s what entertainers do.

If Coutinho had never left Liverpool, their path to the top would have looked totally different. Perhaps it would have never happened at all.

But while Manchester United fans may be trying to figure out whether Dr Strange can send them through the multiverse to a reality where that is the case, the Anfield faithful are continuing to live out their wildest dreams in ours.

The purchase of Virgil van Dijk from Southampton in January 2018 is one of the main reasons for that, a move totally funded by Coutinho’s £120million sale to Barcelona.

Yet even the Liverpool fans with the most hardened of hearts would have cracked a wry smile when Coutinho made Van Dijk his unwilling and unwitting opponent in a match of Panna.

well done but Coutinho did you there son. pic.twitter.com/gd4tMbpXG7

This was no little defender, but the defender. Mr ‘only-one-or-two-players-dribble-past-me-a-season’ Van Dijk. And Coutinho just ‘megged him, sprinted past and carried on about his footballing business. We like to think he yelled out ‘meep meep’ like the Roadrunner as he sauntered past.

“In these games, especially today… he’s playing against his old club, he’s going to want to put on a show,” Jamie Redknapp said of Coutinho before the match.

A snide bit of advertising to be sure, but one that hit the nail on the head.

Coutinho had no pressure on him whatsoever in the match, nor has he had any real pressure to perform for Villa at all since his loan move.

Jamie Redknapp believes Philippe Coutinho will want to put on a show tonight against his former team Liverpool pic.twitter.com/MbPTDSboOG

It was totally unlike Barcelona, where the transfer value akin to the GDP of a small nation meant he had been expected to explode the club to new heights.

Instead, Coutinho undeniably faltered and forgot his lines in the spotlight of the Camp Nou theatre, but that’s understandable; some of the best artists in the world can’t perform in those circumstances.

But now, Coutinho is ‘off-broadway’ again, with no judgmental reviewers waiting to jot down his every mistake. He is free to perform his one-man jogo bonito tribute in peace, and for a crowd who truly appreciates him.

He doesn’t have to smash it out the park every week (and he doesn’t), but in being given the space to express himself occasionally we are made privy to unrelenting Brazilian genius.

Just look at this passage of play that turned Trent Alexander-Arnold into a training dummy. He ‘sombreoed’ the right-back, the Liverpool player only able to watch (probably with some admiration as well) while the ball flew sensually over his head and back into the feet of the Brazilian Villan.

And oh, the shot. Curling as if it was gracefully painted on a blank canvas by a mercurial starving artist, unable to break through the precipice to glory. In a way, it was.

Rumours strongly suggest that Coutinho will move to Villa on a permanent basis in the summer for about £20million and a 50% sell-on clause, bringing an end to his torrid Barcelona spell.

It would be a good move, a heartwarming one that would see him occasionally light up the Prem under the tutelage of his former team-mate Steven Gerrard.

Even if he is not at the top of his game week in and week out, he plays with a smile on his face and for Coutinho that is a pre-requisite for his footballing expression.

If he chooses to stay at Villa, he has chosen freedom above all else. We couldn’t be happier for him.