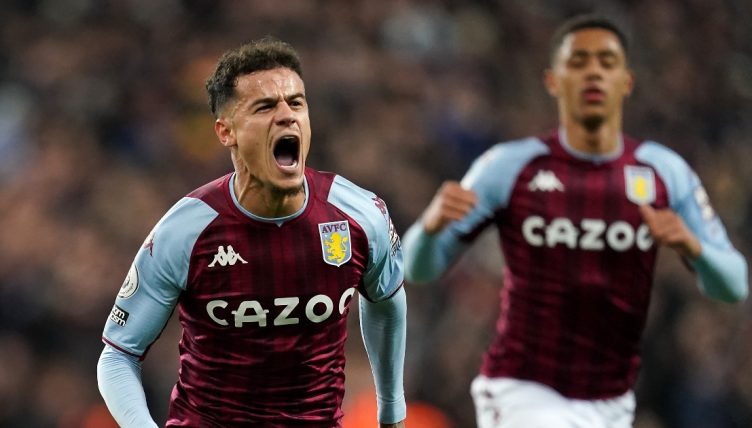 “Swear that Coutinho was designed and built to work in our holy Premier League” is how Opta analyst Duncan Alexander responded to Coutinho’s game-turning Aston Villa debut against Manchester United last month.

In the Brazilian’s 22-minute cameo off the bench with Villa two goals behind, he was instrumental in the build-up to Jacob Ramsey’s goal – albeit robbed of the assist after the final touch was nicked by his Brazil team-mate Fred – before scoring the equaliser himself.

Alexander’s statement was based more on vibes than data, but now, just three appearances in, the numbers back it up. Coutinho has as many goals and assists for Villa this season as he did in the entirety of the 2020-21 La Liga campaign for Barcelona.

Seventy-five per cent of those goal involvements came in a whirlwind 15-minute spell against Leeds United, who went to Villa Park and lived up to their reputation as the Premier League’s kings of chaos.

With a hand in all three of Villa’s goals in the 3-3 draw, Coutinho offered a reminder of why he’s the third most expensive player in history.

Steven Gerrard’s side had started off on the front foot, but Bielsa’s visitors sparked into life when Dan James’ fine finish put them ahead against the run of play in the early stages.

Leeds’ spell on top saw Luke Ayling nutmeg Coutinho before charging up the entire length of the pitch to carve open a dangerous opportunity, and moments later James struck the bar, inches from doubling their lead.

In a game that fluctuated wildly, Villa’s big-name Barcelona loanee appeared to take the Yorkshire side’s dominance personally and decide to wrest the game back singlehandedly

Drifting into the box, he got Villa back level by converting Matty Cash’s cutback cross, with his finish perfectly placed into the bottom corner.

Philippe Coutinho is settling in very nicely at Aston Villa.

He took that goal brilliantly! 💫 pic.twitter.com/0MsFJQ8aMu

That was at the half-hour mark. By 45, Villa were 3-1 up, thanks to Coutinho demonstrating his blossoming connection with Jacob Ramsey by playing two perfectly-weighted through balls for the 20-year-old midfielder to latch onto.

Still, Leeds made it 3-2 in first-half injury time, while Villa instantly charged forward and almost instantly regained their two-goal advantage.

It really had been that kind of half, and Coutinho – who first showed his promise in European football by working under Bielsa disciple Mauricio Pochettino at Espanyol – thrived in the chaos.

With everything going at a mile a minute around him, the playmaker had the speed of thought to assess his options astutely with all three of his goal contributions, as if he were that technical wizard in Sunday league that makes a mockery of those around him that had five pints the night before. The key difference here is that he was up against the fittest and most industrious players in the league.

The usual sample size caveats apply; take that with a tablespoon of salt. But he’s evidently loving his fresh start at Villa Park.

And that was no more evident than in the second half when he decided that Ayling hadn’t quite been given the runaround quite enough yet.

Players with supreme individual trickery can brutally expose Bielsa’s man-marking system, and there are few tasks in football less enviable than Ayling being forced to track a Coutinho in that kind of mood.

Exhibit A: this nutmeg.

It was the perfect demonstration of how breaking through Bielsa’s system suddenly left it exposed, just as each of Coutinho’s two assists for Ramsey had.

Players with that kind of chutzpah are kryptonite to Bielsaball. It’s how and why Paul Pogba came away with four assists against Leeds on the opening weekend of the season.

With Ayling left eating his dust, Coutinho strode down the byline and sent a dangerous cross into the six-yard box, forcing Stuart Dallas into a panicked and clumsy touch that easily could’ve seen the ball end up in the back of his own net.

Like all great nutmegs, it was the subsequent slo-mo replay that truly demonstrated how good it was; where you can pinpoint the fact it was special by each and every Villa fan having their mouths left agape in the background, like the tekkers version of Ralph Wiggum getting his heart broken.

Every frame tells the story: Coutinho is brimming with confidence and enjoying his football once again.

“No!” was Ayling’s emphatic reply when asked by the BBC if he enjoyed the duel. But the fan favourite took it in his usual good grace.

“Naa, we worked hard to get here so when you come up against players like that it’s a good learning curve. But I stuck to my task and I felt I did alright as the game went on.”

“He seems happy, we have given the stage to go and enjoy his football again. His vision and his awareness, if you don’t love watching that you should stop watching football.”

The stratification of resources in football has meant that players as talented as Coutinho – a £105million investment, no less – can spend months or years of their prime struggling if they end up in the wrong environment.

Eden Hazard, Jadon Sancho, Romelu Lukaku, Jack Grealish – are you reading? All it takes is finding the right fit to make fools of those who write great players off.

Seeing Coutinho smiling again is not just great news for Villa, but for football as a whole. He’s far too good a player to have been left moping on a bench.