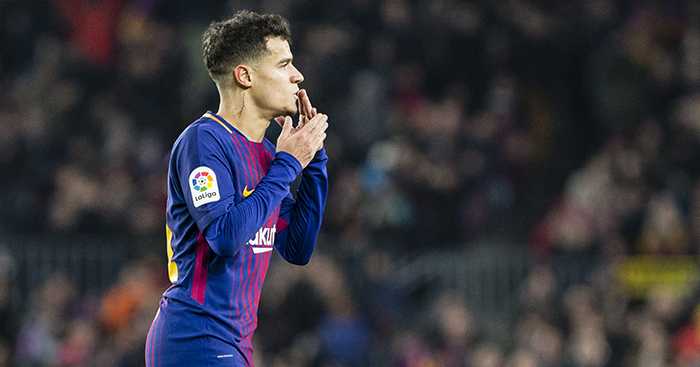 Watching Philippe Coutinho score a screamer on the day Luis Suárez bagged a hat-trick is unlikely to have had Liverpool fans jumping for joy, but it was exactly what the Barcelona fans had been waiting for.

A big transfer fee comes with untold pressure, but a sizeable fee for one of Spain’s big two ratchets that up even further.

Philippe Coutinho has only been a Barcelona player for a matter of weeks, but there have already been suggestions in the media that it was about time he started producing the sort of magic he was bought for. You’ve had your bedding-in period, let’s see what you’re about.

It’s like a kid getting a new toy for Christmas and throwing a strop when it turns out it can’t fire lasers from its eyes. It doesn’t matter whether or not that was in the description – once you get an idea of what someone or something can do, any failure to live up to those expectations will be exaggerated in the mind’s eye.

Before Barcelona welcomed Girona to Camp Nou on Saturday, both Coutinho and fellow big-money signing Ousmane Dembélé had failed to net in the league, and while it was no big deal this season with the 10-point lead atop La Liga, their early teething problems were more of a long-term concern among the glass-half-empty portion of the fanbase.

After all, with Andrés Iniesta and Luis Suárez unlikely to last forever – and that’s before you get onto preparations for Lionel Messi’s eventual retirement – it would be handy for the club to have heirs with a couple of solid years of first-team experience under their belts.

It’s probably for the best, then, that Coutinho did this.

While Coutinho getting on the scoresheet was important in its own right, the manner of the goal should also make a difference.

Barcelona signed his dancing feet as well as his end product, and if the finish showed the precision of his Liverpool years, his movement to create space for the shot was pure Barcelona.

If any Liverpool fans found themselves with an unexplained sharp pain on Saturday evening, they can put it down to a reaction to Suárez and Coutinho linking up four years on (almost to the day) from the pair playing their part in a nervy 4-3 win over Swansea City which helped sustain what would end up being a record 11-game winning run.

Back then, the pair were playing with confidence in a team whose modus operandi was simply to score as many goals as were needed – the run included a 4-3, a 6-3 and three 3-2s – and the goal against Girona felt like nothing had changed.

Indeed, the strike had more than a little in common with another Coutinho goal in a red shirt, albeit one scored a few months after his Uruguayan team-mate had traded Merseyside for Catalunya.

That strike against Manchester City required Coutinho to see off the challenge of Samir Nasri, hardly the most defensive-minded player around, but one can’t help but notice the similarity of him shaking off an opponent wearing the number eight shirt.

Pere Pons had already been given the runaround for an hour, so the Girona midfielder probably enjoyed the sight of Coutinho drifting wide, seemingly into a place of little danger.

The problem with players of Coutinho’s quality, though, is you can know what they’re going to do and still not be able to stop them. Here, you can almost see Pons setting himself for the Brazilian to come back inside…after he has already done so.

It’s the equivalent of someone asking you to hold a door open for them, then quickly walking off in the opposite direction. By the time you’re sure they’re not coming back, you struggle to get your head around what possessed you to wait around thoughtlessly for so long.

The switch happens quickly for Nasri, with his only option being to dangle a leg, but the goal against Girona is much more subtle; football’s equivalent of a frog sitting contentedly in a pan of slowly boiling water.

Pons has to turn and pursue, even if it’s in a full-body shrug, as if acknowledging Coutinho is somewhere else now but unable to explain what happened to bring about that scenario.

That said, Coutinho still had plenty to do with the finish, not that this sort of difficulty has stopped him in the past.

Until last season, his goal tally was generally a case of quality over quantity, often with a surprising amount of power, as if imparting direction and accuracy while screaming at the ball to go harder and faster.

I’ve written about other players coming inside and curling into the far corner, but there’s something different about the goal against Girona, and about some of his goals for Liverpool – not least this one against Stoke City.

To refer to a trademark style for someone averaging eight goals per season might be a bit strong, but some of Coutinho’s most satisfying goals almost resemble shots struck from open play in the style of a set piece.

That we don’t see the same sort of whipped finish from others as regularly can probably be put down to the fact that few give themselves enough time on the ball to pull it off.

Coutinho’s self-confidence and sharpness means he can treat a second on the ball as a minute, lining up a delivery as if he has no one in pursuit. To him, knowing the pursuing player can’t reach him in time is the same as having no one breathing down his neck, which means picking his spot couldn’t be easier.

In theory, Bono in the Girona goal ought to have enough of a sight of the shot to get a hand to it. What he doesn’t realise is the ball is in the net – and in that specific part of the net – before Coutinho has even collected the ball from Suárez.

There might have been heaps of pressure on Coutinho to deliver in this game, to the point that he might have collapsed under the weight of being almost required to deliver.

Instead, he dealt with it as if it was just any other day.