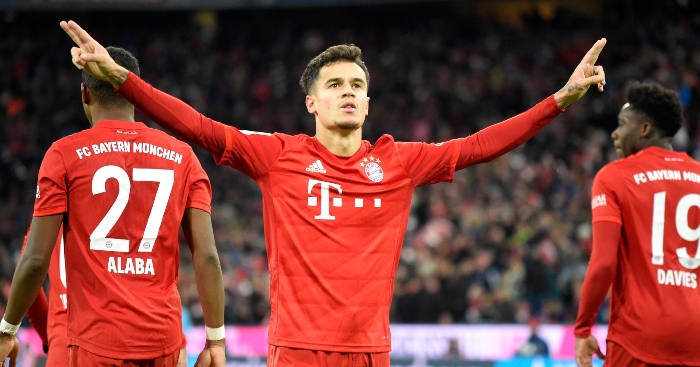 Bayern Munich went into their game against Werder Bremen down in seventh place in the Bundesliga, but that didn’t stop Philippe Coutinho playing like a dominant champion swatting aside his latest challenger.

The Brazilian scored a stunning hat-trick against Bayern’s lowly opponents, consigning Milot Rashica’s opener to the dustbin of history.

Scoring three of his side’s six goals was damaging enough, but the way he converted one of those chances introduced new levels of disrespect to an already one-sided second half.

Coutinho is just one goal shy of matching his total for Barcelona last season, with six in the Bundesliga and one against Tottenham in the Champions League, while his two assists against Werder took him past last season’s five for the Blaugrana.

He might not yet have reached the level of productivity we saw towards the end of his time at Liverpool, but the playmaker is producing the kind of material we want to see from him, like a bandleader returning to the project that made him after years in the supergroup wilderness.

The clinching goal, a sumptuous curler into the top corner, would have been the highlight of most players’ afternoons. However, he had already produced something even more special.

Coutinho’s second goal was one of those which doesn’t make you angry, but rather makes you feel as though you need to give an outward display of anger because that’s the done thing in these situations.

The execution works on the finest of margins, giving goalkeeper Jiri Pavlenka a sense of hope which was never genuinely open to him. As he lifts the ball over the head of the Czech international, he’s dangling a cookie over the edge of a cliff, telling the Werder players “look, it’s right there, you can grab it if you just try a little bit harder”. Except there never was a cookie to begin with.

The flourish of spinning away is what makes it, though. It’s as if Coutinho has already moved on with his life before the ball has even crossed the line. What, that? The thing you’ve just strained every sinew to prevent and made yourself look stupid in the process? Don’t know what you’re talking about, mate. That’s old news. Now take the ball back to the centre circle so I’ve got time to score again.

Good goals leave opponents furious the moment they hit the net. Great ones leave them wanting to throw up.

Philippe Coutinho is a baller!

He hit an outrageous hattrick that gets better with every goal! pic.twitter.com/SrAmaWuTmz

The best players in world football don’t get where they are by venerating their opponents and treating them with respect for 90 minutes each week. Part of what gets you to the top is providing timely reminders that you’re better than them both in the basics and the things which haven’t even been close to their repertoire.

Coutinho demonstrated that time and again in a Liverpool shirt, with strikes like his “wait, wait, wait… okay, now” effort against Chelsea.

When he’s in control, forcing others to eat out of the palm of his hand, is when he’s at his very best. Having responsibilities can lead certain players to try too much all the time, but it works both ways – when you go from being one of the main men to someone whose role is limited to suit the wider priorities of the team, it can play on your mind.

He seemed to have lost a bit of that quality at Barcelona, but in his defence it’s understandable to let self-doubt creep in if you’ve got daily reminders of Lionel Messi doing all the things you do only better.

The last couple of games will have Chelsea dreading their return to Champions League action against Bayern, even if the Bavarian side’s 21 goals in their first five group games didn’t have that effect.

There might be better performers in this Bayern squad, but few have as much of a licence to be the piss-taker in chief. Sometimes it’s just nice to know your place.