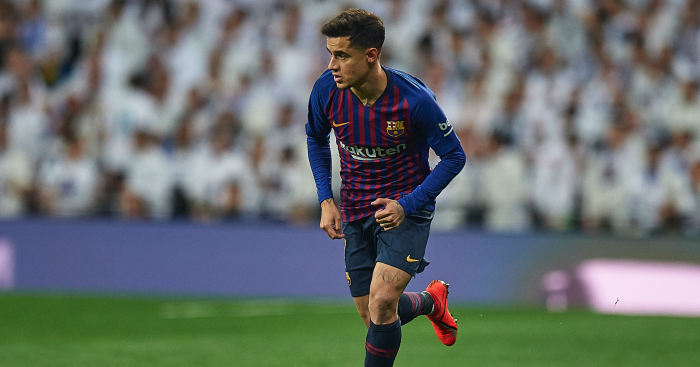 Philippe Coutinho might not have had the best of times at Barcelona since joining from Liverpool, but he’ll hope one special moment in El Clásico can act as a springboard for his career in Catalunya.

Coutinho has undoubtedly had his moments since arriving from Liverpool for a nine-figure sum, but he’ll also undoubtedly have expected more from himself.

Indeed, after it looked for a while as if Ousmane Dembélé would end up being the big-money flop, the Frenchman has been revitalised this season while Coutinho has failed to hit the heights desired of a £100m+ player.

However, if there was ever going to be a game in which to impress, it would be a league victory at Real Madrid’s Estadio Santiago Bernabéu.

Coutinho might not have scored the decisive goal – that honour went to Ivan Rakitić in the first half – but he produced one moment of genius which helped him leave a mark on the game.

There’s a common refrain that, when a prisoner arrives in a new jail, the best way for him to stay out of trouble is by going up to the biggest or most threatening guy in the yard and punching him square in the face.

Luka Modrić might not be the most physically imposing, but for a player like Coutinho there’s plenty to be said for taking on the reigning Ballon d’Or holder and leaving him scrambling to simply stay on his feet.

The idea of a player pulling the rug out from under his opponent is a common cliché, but here it looks as if the Brazilian has done it literally.

In those couple of seconds, Modrić lost his unflappable reputation, transforming from the balletic ice dancer we saw at the World Cup to a child stepping out onto a neighbourhood rink for the first time in his life.

As he sprints back to cover, Modrić still sees himself as the world’s greatest, setting himself to sweep up as another opponent tries to get the better of him. And after neutralising Lionel Messi’s Argentina and a pumped-up England during the World Cup, why shouldn’t he believe this will be just as simple?

He is poised to intercept but not to deal with what the Brazilian does throw his way, and to say he should have been ready for it is too simplistic.

Just as with the turn on Girona’s Pere Pons for his first La Liga goal last season, Coutinho’s footwork of the mind seems unspectacular or even insignificant at first glance, but the reaction of the opponent is enough to confirm your suspicions that it is anything but.

Modrić is sent off in chase of the idea of Philippe Coutinho, only realising the extent of the trickery when it is too late to recover any pride. Such is his struggle that any attempt to right himself leaves him scrambling just to stay upright.

The Croatian’s task ceases to be stopping Coutinho – that moment has long since passed – and becomes simply doing anything possible to keep the moment from being replayed over and over with comedy sound effects. 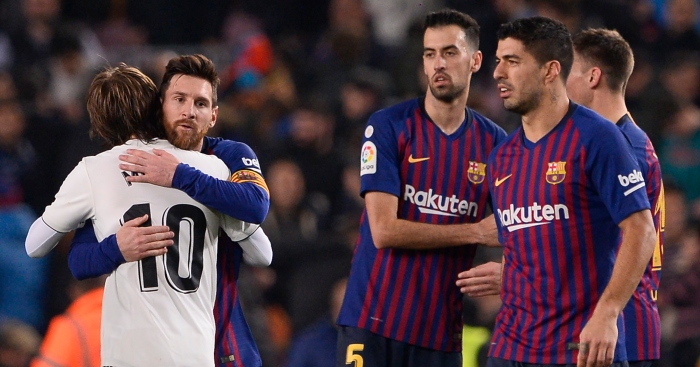 That might not have been the only point in the game at which Real Madrid were convinced it wasn’t going to be their night, but it at least seemed to confirm the theory.

Earlier in the game, after Sergio Ramos began by getting up to his usual antics with an arm to the face of Lionel Messi, he found himself in the unlikely position of actually receiving his comeuppance in the form of a smack to the head from Barça goalkeeper Marc-André ter Stegen and further punishment from Clément Lenglet.

When even the traditional villain of the piece is taking such punishment, it’s easy for the psychology of expecting defeat to permeate the entire team.

Coutinho is the type of player who can revel in such a situation: it’s not that he’s a flat-track bully, but rather that he can step things up in the face of indecision like a predator getting a scent of blood and eviscerating his target to the point they become unrecognisable.

The next target for Coutinho, of course, is to produce these moments with greater regularity: just four of his eight goals this season have come in La Liga, while he has contributed a mere five assists despite being part of a team with 80 goals across La Liga and the Champions League.

Moments like the one up against Modrić might not be enough to trouble the stats collectors on their own, but they’re the sort of thing he should be able to build on and use as a platform for the remainder of the season.

As for Modrić himself, he might need a little while to sit down and think about what he has done.