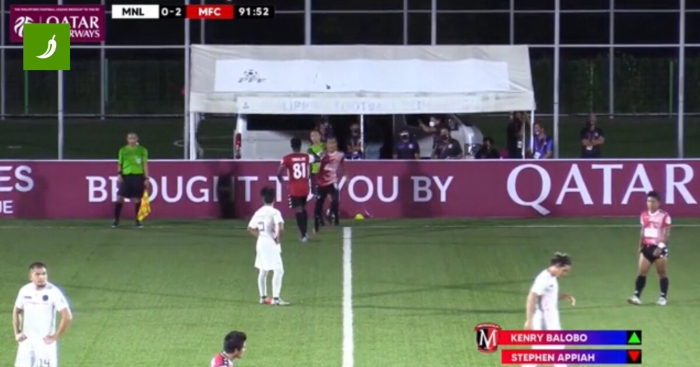 Robbie Fowler had never seen anything like it. Manchester City were playing Middlesbrough in May 2005, desperate for a winning goal that would seal a UEFA Cup spot at the expense of their opponents.

Fowler takes up the story in his autobiography: “What the keeper did next was the funniest thing I have ever seen. I almost couldn’t play for laughing, even though it was a serious situation.

“Jamo is a massive fucker, six foot six and built like a brick shithouse. Every single ounce of his frame went into smashing the Boro defenders around like they were skittles.”

The chaos of James’ presence forced Middlesbrough to concede a last-minute penalty. While Fowler missed the resulting spot-kick, barely anybody remembers that; not when the sight of James lumbering around up front remains imprinted on countless minds.

Amazing to think that 15 years ago today Man City boss Stuart Pearce, with his side needing a goal to qualify for Europe, said:

“Fuck it, stick David James up top and get in the mixer…”pic.twitter.com/aBFekL6Q5v

While Pearce’s substitution is now looked back upon like some unused plotline from Mike Bassett: England Manager, its influence appears to have travelled far and wide.

Filipino football is not particularly popular. While Premier League teams are followed with a fanaticism bordering on religion, local matches are rarely well attended and players paid a fraction of those in top European leagues.

Many clubs are liable to fold under financial pressure and this season’s Philippines Football League only contains six teams. What the league lacks in stability, it makes up for with delightful quirkiness.

During the league match between Maharlika Manila and Mendiola United on Monday, the visitors saw fit to protect their two-goal lead as the match entered injury time. What nobody had realised was that coach Dan Padernal had clearly been a keen student of the 2004-05 Manchester City squad.

Bringing off Stephen ‘not that one’ Appiah, Padernal decided substitute keeper Kenry Balobo was the right man to replace the forward. It was like a FIFA player plunging the depths in an attempt to troll their housemate (not that we’re speaking from experience or anything).

To underline the true piss-taking nature of the substitution, the two teams were competing to keep their hopes of qualifying for continental competition alive. Mendiola’s win meant they finished fourth to earn a place on the standby list for the AFC Cup, the defeat saw Manila eliminated from potential continental qualification. (You may have to follow the Reddit link to watch the clip.)

My country’s league (Philippines Football League) has recently concluded, but not without its share of odd moments. In a vital match to see who would qualify internationally, Mendiola subbed on a second string KEEPER to play at STRIKER. I’ve seen outfield players go in net, but not the opposite! from r/soccer

Two things stood out. First, Balobo was wearing the number two shirt, which seems inappropriate when worn by anyone who doesn’t play right-back.

Secondly, the match commentators, acting like Homer Simpson presented with a child-proof bottle, seemed incredibly baffled by the very concept of a keeper playing outfield. Glorious stuff all round.

While Balobo did not trouble the scoresheet, we can only assume his chaotic presence upfront deterred Maharilka from scoring a consolation.

However, the main lesson here is that the teachings of Stuart Pearce transcend international borders.

When Barbados & Grenada both tried to score deliberate own-goals

Neil Etheridge: I nearly blew my career after Fulham and had to sell my house