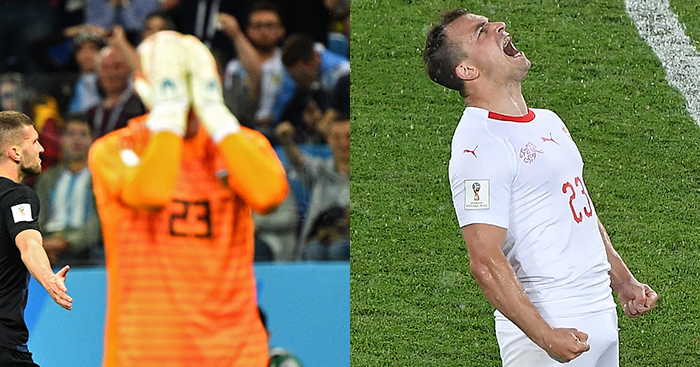 From Willy Caballero to Jo Hyeon-woo, the number 23s of the 2018 World Cup are making a huge impact. In good ways and bad.

When David Beckham moved to Real Madrid in 2003, he was denied the option of his usual number seven shirt. That iconic jersey was the property of Raúl, so Becks was left with a limited selection.

He eventually decided on the number 23, because that was the number worn by basketball player Michael Jordan, a sportsman whose global reputation Beckham was — at this point — still trying to emulate.

The bug caught on. Four years later, the world was treated to The Number 23, a psychological thriller starring Jim Carrey as a man obsessed with the number 23. Its Rotten Tomatoes score today stands at a modest 8%.

You, like Jim Carrey, might also be obsessed with the number 23 right now, because a surprising number of World Cup number 23s are currently doing spectacular (and spectacularly bad) things in Russia.

At international tournaments with 23-player squads, the number 23 is often reserved for a third-choice goalkeeper. See, for example, Pepe Reina, who is currently taking in part in his fourth consecutive World Cup as Spain’s number 23.

Reina has never been Spain’s first-choice keeper, and across his four tournaments has made just two appearances.

Only a handful of players wearing the ninth prime number this summer are recognisable as regular starters for their countries.

These few, most of whom are outfielders, include Switzerland’s Xherdan Shaqiri, playing in his third consecutive World Cup as number 23; Germany striker Mario Gómez, who also appeared in 2010 as number 23; and skilful Danish winger Pione Sisto.

Ultimately, you simply wouldn’t expect a World Cup to be dominated by footballers who are ‘last’ in their respective squads.

Yet that’s exactly what we’re seeing in Russia.

Since 23 is often a goalkeeper’s number, let’s start with some of the incredible goalkeeping performances we’ve seen from number 23s across the group stage.

On the second day of the tournament, a few of us were heartbroken to see that 45-year-old Essam El-Hadary, Egypt’s number one, had only made the bench.

Between the sticks instead was 29-year-old whippersnapper Mohamed El-Shenawy who, despite going into the tournament with just three caps under his belt, was chosen over his experienced colleague.

We needn’t have been so glum. El-Shanawy’s man-of-the-match performance was a joy to behold and set a precedent for other little-known keepers with number 23 on their backs.

Step forward Nigeria’s Francis Uzoho, aged just 19, who delivered a clean sheet in the 2-0 victory over Iceland and produced an admirable performance in the 2-1 defeat to Argentina, in which neither goal was easily stoppable.

The Deportivo youngster has massively increased his profile and could be Nigeria’s long-term replacement for Vincent Enyeama.

Yet neither El-Shanawy nor Uzoho performed as well as their South Korean counterpart, whose showing against Germany could be one of the most significant individual performances of the tournament.

While Uzoho was widely expected to be Nigeria’s figurative-if-not-actual number one in Russia, South Korea’s Jo Hyeon-woo was not. In fact, the Daegu FC goalkeeper was seen as Korea’s third choice going into the tournament.

That all changed when manager Shin Tae-yong realised just how many giants there were in the Swedish squad. With Korea’s first opponents posing a big threat at set pieces, the 6’2 Jo was called upon to keep net.

Korea lost that match and their second against Mexico, but Jo — sporting one of the haircuts of the tournament — registered a string of brilliant stops to keep out, and ultimately knock out, reigning champions Germany in the final game.

In doing so, Jo made himself a hero among Mexicans, Brazilians, Brits and, well, just about everyone.

That being said, not all number 23s have produced such impressive performances at the 2018 World Cup.

And rather than stay anonymous like godfather-of-last-place Pepe Reina, some have put on spectacular horror shows.

But when the third match came around, Russia had already qualified, allowing for some sensible squad rotation.

Smolnikov used his opportunity in an unusual way: 35 minutes into the match — his World Cup debut, no less — the Zenit full-back received his second yellow card and was sent off. The ensuing 3-0 defeat meant Russia finished the group in second place, and will now face Spain.

Still, if The Number 23 were to be remade this year — and it really shouldn’t be — only one player would merit inclusion in one of Jim Carrey’s tedious monologues.

The Hiroshima bomb was dropped at 8:15. Eight plus 15 is 23. Waco, Texas, and the Oklahoma city bombing. Both happened on April 19th. Four plus 19 is 23. Willy Caballero’s squad number when he inexplicably chipped the ball in the air for Ante Rebic to score? TWENTY…BLOODY…THREE.

Yes, hapless Argentina keeper Caballero, who won his first senior cap this year at the age of 36, produced the biggest blunder of the World Cup when his side faced Croatia in their second match.

Provided with a routine back-pass, the number 23 opted to chip the ball over winger Ante Rebic.

Only, like an amateur golfer stuck in the bunker, the chip was utterly, utterly flaccid, hanging just above Rebic, who then stylishly volleyed home.

Having scraped into the last 16, Argentina are expected to progress further in the World Cup, but after being dropped for the key match against Nigeria, Caballero probably won’t be adding to his five caps.

Sadly, some of the tournament’s best number 23s — including the three brilliant keepers of Egypt, Nigeria and South Korea — are already going home.

But if Xherdan Shaqiri’s early form is anything to go by, and if Nick Pope gets thrown in at the deep end like we all secretly hope he will be, this could still be the ultimate World Cup of number 23s.