‘Everybody loves Olivier Giroud’ – Can we swap lives with him for a day? 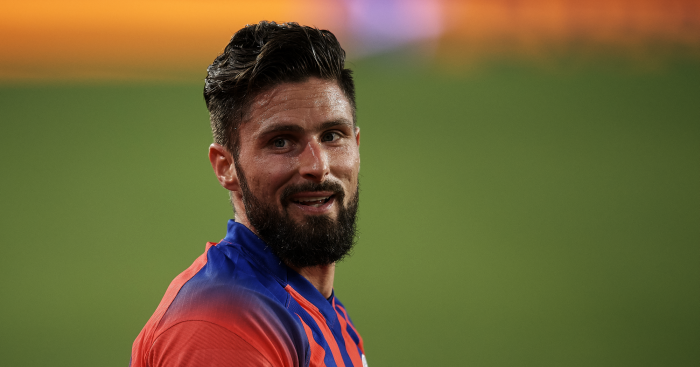 After watching his four-goal haul against Sevilla, a thought crossed our minds: imagine what the life of Chelsea striker Olivier Giroud must be like.

Probably the most handsome man to play in the Premier League since David Ginola, Giroud has previously been the face of a Hugo Boss advertising campaign. With immaculate facial hair and the air of a suave television doctor, it is likely that the vainer of us would devour ourselves limb by limb if blessed with the French striker’s looks.

Of course, this is secondary to his ability as a footballer. Since arriving in England from Montpellier in 2012, he has achieved the impressive feat of winning over the demanding fanbases of both Arsenal and Chelsea with his performances.

A selflessly hard-worker, brilliant at bringing others into play and possessing a fierce shot, Giroud has often been criticised for his goal tally throughout his career. This has often seemed unfair; the footballing equivalent of watching a film while distracted by your phone before complaining you cannot follow the plot.

After all, it was Giroud’s introduction to the France team during the 2018 World Cup that liberated Antoine Greizmann and Kylian Mbappe, leading Les Bleus to ultimate glory in Russia.

At Arsenal, his physical presence and ability to create space was a godsend for Alexis Sanchez at his peak. Across London at Stamford Bridge, he has had a similar impact on Eden Hazard.

Besides, Giroud has always been a better goalscorer than given credit for. Not many players have his penchant for unconventionally spectacular goals, such as his swan volley against Crystal Palace in 2017 that won FIFA’s Puskas Award.

At Chelsea, the striker has managed a goal every two and a half matches, not too shabby given he has rarely been first choice.

Arguments have swirled around Stamford Bridge as to whether the 34-year-old would be a better option up front for Chelsea than Tammy Abraham or Timo Werner. Up against two players with age on their side, there is an argument that Giroud represents a better option for the present moment than either of his competitors.

He did his chances no harm against Sevilla, scoring a perfect hat-trick before adding a late penalty for good measure. It was a haul that seems specifically targeted as those who continue to misunderstand his worth.

The first goal capped an impressive Chelsea team move, reminiscent of someone watching the Argentina 2006 team while sitting on the fast forward button.

Ten seconds was all it took for the ball to travel like a log in a tidal wave from one penalty area to the other before it found Giroud. With impressive composure, the forward shifted the ball onto his left foot before bending a finish beyond Alfonso Pastor.

Like a pristine thoroughbred, Giroud had the bit firmly between his teeth. His next effort, early into the second half, had more than a touch of class about it.

Following good work from Jorginho and Mateo Kovacic, Giroud held off his marker before delicately lifting the ball over an onrushing Pastor with the skill of a hitman euthanising his victim.

Olivier Giroud is such a classy player!

An exquisite chip from the French forward doubles his goal tally for the night and Chelsea's lead! 🤤 pic.twitter.com/o2JV013LBP

After N’Golo Kante had accelerated the length of the Sevilla half and unleashed a pinpoint cross, France’s second-highest ever goalscorer merely had to flick his eyebrows in the general direction of the ball.

Unfortunately for Pastor, the power generated by the header would have made a hole in a prison wall. As the Chelsea players celebrated, Lampard applauded vigorously and looked like the cat who first discovered cream.

Giroud has a perfect hat-trick! 🔥🔥🔥

Lampard is loving what he's seeing on the sideline! 🙌 pic.twitter.com/WfMUok6rna

Later, Giroud wrapped up his night by converting a late penalty that ensured Chelsea will finish top of their Champions League group. Before the game, Jorginho had said: “Everyone loves Olivier Giroud.” By the end of the game, love had turned to obsession.

Despite being blessed in numerous ways, perhaps Giroud is always destined to be viewed as replaceable by a younger model. His goal tally, while respectable, is the kind that would make managers believe a more prolific forward is out there.

Yet this belief does not acknowledge what Giroud does offer. Not many strikers marry an imposing physical presence with feather-like feet as he does, nor do they bring out the best in word-class forwards in the same manner.

There is a reason these players love playing with Giroud, and perhaps only Roberto Firmino is an apt comparison among the elite clubs.

Looks, popularity and the ability to score four goals in a tough Champions League away game. Our heads would explode with joy if we lived Giroud’s life for just one day.