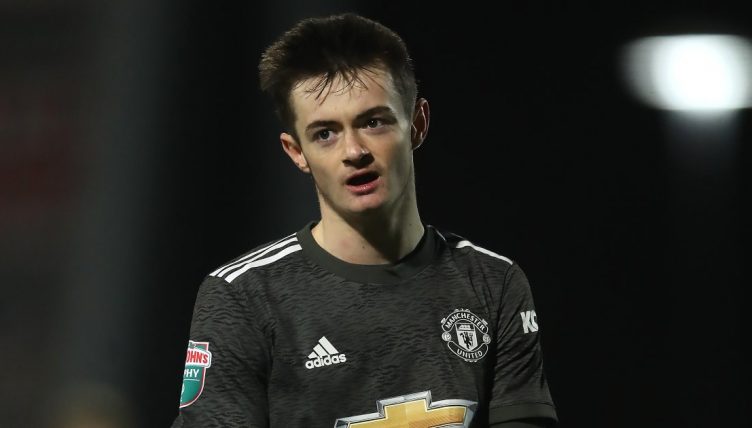 From Erling Haaland to Harry Kane and Cristiano Ronaldo, Manchester United have been continuously linked with a striker in the transfer gossip columns.

Considering Edison Cavani turns 35 next year and Anthony Martial scored just four Premier League goals in 2020-21, that may not be too surprising.

Marcus Rashford and Mason Greenwood are two brilliant talents but are yet to fully convince in a central role and have mainly been deployed out wide for the first team.

The likes of Haaland and Kane would both command club-record fees. Having agreed to pay £73million for Jadon Sancho, United now look unlikely to sign a new No.9 in the summer transfer window.

Fortunately for Ole Gunnar Solskjaer’s side, their long-term striker solution could be right under their noses.

In the summer of 2020, Manchester United reportedly fought off competition from Arsenal, Tottenham, Leeds United and Wolves to sign a 16-year-old Joe Hugill from Sunderland in a £300,000 deal.

After the Red Devils had already poached the highly-rated Charlie McNeill from rivals Manchester City, Hugill arrived at Old Trafford with little fanfare.

While McNeill has enjoyed a promising start to his United career with the Under-18s, Hugill has since replaced him as the star attraction at Carrington.

The striker hit the ground running with two goals on his Under-18s debut against Blackburn, including a stunning strike from the edge of the penalty area that left the goalkeeper rooted to the spot.

Having watched Hugill terrorize the poor Blackburn defenders, United soon realised that it was unfair on their opponents to keep playing him at this level.

Joe Hugill smashes one in on his #mufc U18 debut 💥 pic.twitter.com/7Wk0ZRyivl

He was fast-tracked into the Under-23s and made a seamless transition, scoring after just two minutes on his first Premier League 2 start for the club.

Despite still being 17, his 6’2” frame allows him to compete against players that are considerably older than him, and he is as comfortable with the ball at his feet as he is challenging for the ball in the air.

Blessed with a strong left foot and intelligent movement, Hugill has a knack for always being in the right place at the right time and continues to enhance his burgeoning goalscoring reputation.

He has already been compared to Kane and United fans might be getting flashbacks to Ruud van Nistelrooy when they see Hugill in front of goal.

While Amad Diallo earned plenty of plaudits for his performance in the Under-23s’ 6-3 win over Liverpool in January 2021, it was Hugill that impressed Solskjaer with his incredible four-goal haul.

It was goals galore in yesterday's #MUAcademy U23s game against Liverpool 👇

4️⃣ goals from Joe Hugill and 2️⃣ from @AmadDiallo_19 stole the show on Merseyside! ⚽ #MUFC pic.twitter.com/427JThy0Gf

“If we go from that game [vs Liverpool], I’d pick Joe Hugill,” Solskjaer said. “Four goals by Hugill, he’s a top striker as well, we’re looking forward to seeing his development.”

The variety of the four goals makes this achievement even more impressive and if anyone knows what it takes to be a “top striker”, it’s Ole Gunnar Solskjaer.

Hugill’s debut season was later curtailed by injuries, but he still scored 20 goals in 35 appearances for their Under-18s and Under-23s, averaging a goal every 125 minutes in 2020-21.

According to the Manchester Evening News, he narrowly missed out on first-team squad inclusion towards the end of the campaign and is set to be rewarded with a new contract when he turns 18.

With several players away on holiday after Euro 2020, the striker has been promoted to first-team training and appears to have bulked up in recent months.

After Greenwood established himself in Solskjaer’s squad during United’s pre-season in 2019, Hugill will be looking to follow in his footsteps this summer.

Rather than knocking on the door of the first team, he will undoubtedly kick it down if he gets an opportunity to showcase his skills.

In the meantime, Premier League defenders should savour every moment before Hugill makes his senior bow.