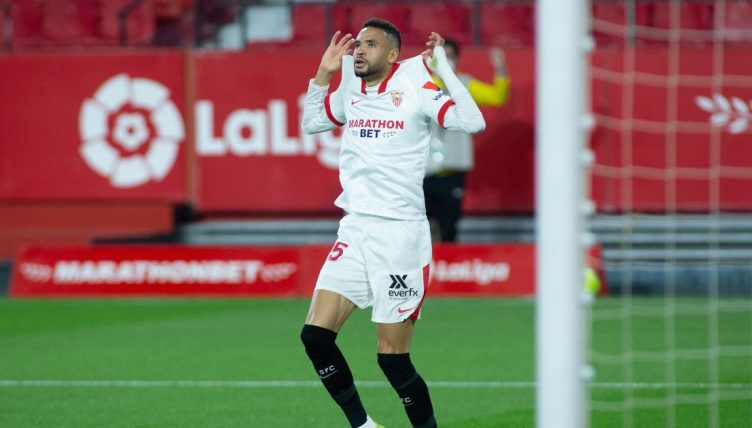 A ‘purple patch’ is defined as a run of success or good luck. Football’s history is littered with such instances.

Ruud van Nistelrooy’s first two seasons at Manchester United were defined by record-breaking runs of form, but the most heart-warming examples are those of the unexpected.

We can all name a few. Michu, Michael Ricketts, Rickie Lambert, David Healy and Jesse Lingard are just some forwards who have briefly elevated themselves above their normal levels, scored a load of goals and captured the imagination of neutral supporters.

These purple patches have often resulted in a big-money transfer where the magic isn’t quite replicated. The jury is out on whether Youssef En-Nesyri will be the latest example of a footballing trend.

En-Nesyri has experienced quite the season for Sevilla. Signed from Leganes in January 2020, the Morocco international has scored 22 goals in all competitions this term, which is already double his previous highest tally over a season.

He’s scored all different types of goals, from opportunistic finishes to strikes bludgeoned through goalkeepers and moments of inspiration. This is a footballer whose varied attributes make a Swiss army knife look one dimensional in comparison.

A quick double from the Moroccan striker has Sevilla in complete control ⚪🔴 pic.twitter.com/MLAMVlq7r5

At 23-years-old, it’s no surprise that Premier League clubs are beginning to circle like vultures. Liverpool and Manchester United are rumoured to be monitoring the striker, but the strongest interest has come from West Ham.

The Hammers were unsuccessful with a £27million bid in January – which was labelled “unsatisfactory” by Sevilla sporting director Monchi – and are expected to renew their interest over the summer.

With West Ham having a longstanding reputation as a graveyard for forwards, plenty will be wondering whether the club would be walking into another expensive trap after being seduced by the latest forward in form.

But En-Nesyri is used to attracting a legion of doubters. Born in Fez, he attended the Muhammed VI football academy in Rabat aged 12. With outstanding facilities but no associated first team, En-Nesyri moved to La Liga side Malaga five years later.

His athleticism impressed coaches, but they were reservations about his first touch and decision making. More reserved than the average footballer, concerns were also raised over whether he possessed the required application to become a success.

But En-Nesyri earned himself a move to Leganes, then Sevilla. According to The Guardian‘s Sid Lowe, writing in January 2021, there were “plenty who hadn’t even been that sorry to see him leave Malaga for Leganes. Now there were doubts about him heading from there to Sevilla.

“Many considered him limited technically, a man with a heavy touch who missed as many chances as he scored, €20million seemed high to them.”

And when the Moroccan was presented with a golden chance to win the Europan Super Cup final against Bayern Munich in September, he missed it. Tears ensued and the detractors seemed justified in their misgivings.

En-Nesyri has attacked this season with the hunger of a man eager to prove every single one of those doubters wrong. A hat-trick against Real Sociedad in January was followed by another past Cadiz two weeks later.

And when presented with another one on one, this time against Getafe, the outcome was never in any doubt.

Goals of Munir and En-Nesyri for Sevilla against Getafe 🇲🇦🔥. pic.twitter.com/FlMlwqKskD

The one on one is as close to medieval jousting as football gets – it’s all man versus man and seeing the whites of your opponent’s eyes but with an added element of deception that appeals to our base instincts.

Another factor is the capacity of human beings to self-sabotage themselves. And you can be sure the miss against Bayern was at the forefront of El-Nesyri’s mind when sent through by midfielder Fernando.

But a footballer high on confidence is already halfway up the mountain. As Getafe goalkeeper Ruben Yanez rushed out to meet him, the striker gave the subtlest of feints, shifted the ball onto his left foot and slotted the ball into an empty net.

In response, Yanez gave a token challenge in opposition that many thought was the trademark of Keir Starmer.

Yes, Sevilla were already two goals up by this point and the stakes were substantially lower than his Super Cup miss. But it was simply further proof that El-Nesyri is a person ready to answer any questions his doubters may have of him with determination, hard work and no little skill.

Those qualities should ensure that his goalscoring exploits this season last longer than your average purple patch.