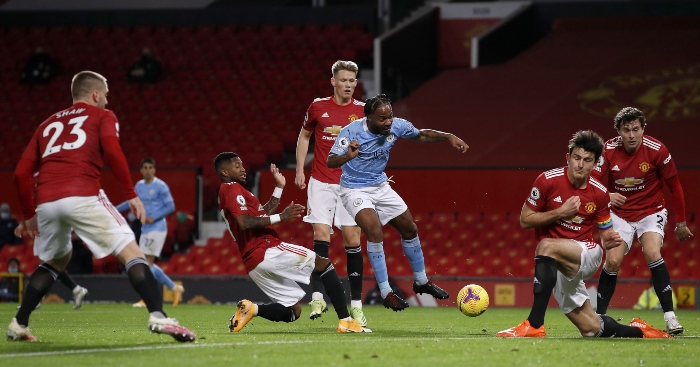 Manchester City‘s 0-0 draw against Manchester United was an absolute snoozefest, going completely against what we all hoped it would be.

There weren’t too many moments of great quality, with both teams looking pretty predictable in the majority of their play and very few players threatening to show any real ingenuity.

Raheem Sterling is one man who will at least show flashes of brilliance every game and that was certainly the case in this match, as he provided a rare moment that brought us any form of excitement.

During last season’s Manchester derbies, the winger failed to get the better of Aaron Wan-Bissaka and this was clearly playing on his mind.

He may not have scored at Old Trafford, but we love the 26-year-old for bringing a bit of imagination to the game when even the likes of Kevin de Bruyne, Bruno Fernandes and Riyad Mahrez were failing to do so.

Raheem Sterling sends Wan-Bissaka for a hotdog but his shot is eventually blocked by Harry Maguire! ⛔🌭

For a second, Aaron Wan-Bissaka was probably transported back to the weekday game against RB Leipzig in the Champions League, in which he had been torn apart by the Bundesliga outfit.

Angelino had got behind the right-back to score the opener, while both of the two goals that followed the Man City loanee’s strike began with crosses coming in from Wan-Bissaka’s side of the pitch.

This will probably have been mortifying for Wan-Bissaka, but none of these moments sent the 23-year-old flying across the pitch like Sterling did here, leaving the right-back looking like Bambi on ice in his own box.

Having got past his fellow Englishman, Sterling also completely bamboozled Victor Lindelof with a drop of the shoulder and a touch past the Sweden international, who seemingly attempted some sort of break dancing after falling hook, line, and sinker for Sterling’s ploy.

Wan-Bissaka and Lindelof were made to look like complete fools by Sterling, and it would have been even worse for the pair of United defenders if it hadn’t been for Harry Maguire bailing them out.

It says a lot about the threat Sterling posed at this point that there were four players crowded around the winger when he struck the ball in the Red Devils box, while Wan-Bissaka was still picking himself up after being sat on the floor.

The United defence looked in complete fear of Sterling, perhaps because pretty much everyone else on the pitch had forgotten how to show any sort of creative quality whatsoever.