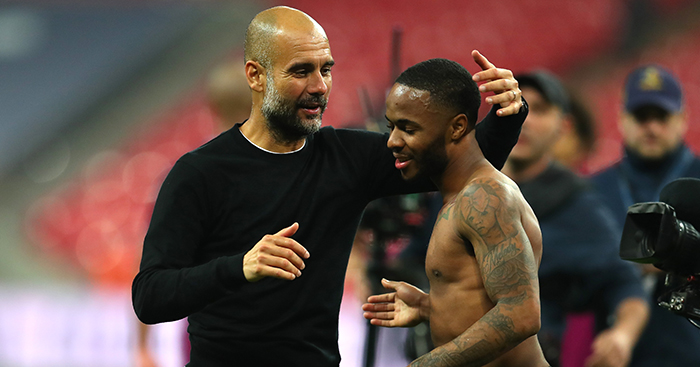 There was a moment during Manchester City’s win at Wembley on Saturday night that demonstrated how far Raheem Sterling has come this season. And it’s definitely not the moment you think.

Despite enjoying his best ever goalscoring season, Sterling has been criticised recently for some of the chances he’s missed – and there was another example against Tottenham.

Receiving the ball about 10 yards out in front of goal, the England international committed Spurs goalkeeper Hugo Lloris but couldn’t find a route past the outstretched boot of Kieran Trippier as the defender slid in to block.

For many, certainly those who watched him last season, this could have been viewed as another example of his proliifacy, of the City forward dallying when he could have kept things simple.

This year, however, there’s another interpretation.

Sterling has shown a lack of composure in these situations in the past, and previously he may have snatched at the shot and fired straight at the goalkeeper or blazed the ball off target.

While he hasn’t got that sort of thing out of his game entirely, the chance against Spurs demonstrated the cool head of a player prepared to take his time, safe in the knowledge the chance he has to take instinctively will arrive later on.

As it happens, that chance arrived barely a minute later, and Sterling took it confidently with a high finish to give Lloris no chance.

“The most important thing for me is that I’m getting into positions,” Sterling said after the game. ‘I’m making the breaks and getting into areas where I can get on the end of stuff.

“Then it’s down to me to put it away. Slowly but surely I’m getting the numbers up and keep going, and building next year.”

Coincidentally, Sterling’s miss and goal combo mimicked the display earlier in the day of the man who indirectly took his place at Anfield in 2015.

Roberto Firmino had a similar chance during Liverpool’s win over Bournemouth, exuding calm to let Asmir Begovic commit himself, only to fail to finish the job. And later, like Sterling, the Brazilian would ultimately get his goal.

If you’re part of a free-scoring team, the chances you don’t take can still offer positives in the wider game. If you can see the second chance on the horizon even before the first one has presented itself, it becomes easier to implant a sense of helplessness in the minds of your opponents.

Sterling, surely more than most players outside that reliable bank of orthodox number nines or Mo Salah-like forces of nature, can see that next chance around the corner.

Bobby Gardiner explained for The Ringer earlier this season how Sterling’s shooting, both in terms of volume and quality, has developed in his second season under Pep Guardiola.

And while the City coach’s influence should not be underestimated, there’s little than can be said about the Catalan’s mentorship which hasn’t already been analysed in great detail.

There are, however, other factors we can look at when it comes to the England man’s progression from someone criticised for underwhelming in the light of a hefty transfer fee to someone whose worth to a super-club is now properly being understood.

It is worth examining, for example, how Sterling’s own development has allowed him to reap the benefits of an ideal system around him and then take this one bit further.

Only six players have taken more shots than Sterling in the Premier League this season, and his current tally of 78 is already an increase of more than 20% on his tally for the whole of last season.

In previous campaigns, when finding himself on the end of fewer opportunities, there might have been a tendency for him to put more pressure on himself to make the most of any chances that presented themselves – this, in turn, has the potential to lessen the quality or precision of these efforts, for fear of being accused of wastefulness.

In contrast, when you’re averaging two shots or more per game, you might be able to convince yourself to become more adventurous in front of goal on the grounds that each individual chance doesn’t carry as much pressure as it did in the past.

And then, when the easier chances come about, they really are that easy – even past misses won’t trick you into second-guessing yourself.

The problem with trying to deal with Sterling’s performances in front of goal this season is that he doesn’t really have ‘on-days’ and ‘off-days’, he just has days.

Former Arsenal forward Gervinho was once described as someone who “doesn’t veer between good and bad [but] plays on the fine margin of whether his shit comes off or not,” and this is both very true and very untrue when it comes to Sterling.

In terms of his shooting, there’s undoubtedly some truth to the matter: while he’s shown he can strike a ball fantastically at times and has clearly been working on his consistency, there are still occasions – his late miss against Manchester United springs to mind – where his physical contact with the ball doesn’t exactly scream “world class striker”.

However, this is surely to be expected of someone whose development has involved him being used in a wider role where he can trouble defences with his pace and speed of mind.

And here’s where we see how Sterling has been able to elevate himself above being merely enigmatic: the developments in his finishing have not come at the expense of his other qualities, but rather he has made the improvements in a way that’s complementary to the assets which made him worthy of that £49million move to begin with.

Footballers with Sterling’s pace and movement can often be misused, with coaches feeling as though their talents are best suited to playing on the break or employing a high press early in a match.

However, Sterling has shown this season that he is just as effective at unsettling and breaking down resilient defences.

On occasion, a defender or goalkeeper can look at opponents wasting openings and get a sense that it’s just not that player’s day, but you can rarely have this same certainty where Sterling is concerned.

When Tripper kept him out on Saturday, the let-off might have sparked Spurs into life, but any response would always need to be interrupted by the next chance, and the one after.

It’s not that Sterling will keep knocking on the door undeterred, but rather that he can appreciate an unanswered door doesn’t necessarily mean his method of knocking was wrong.