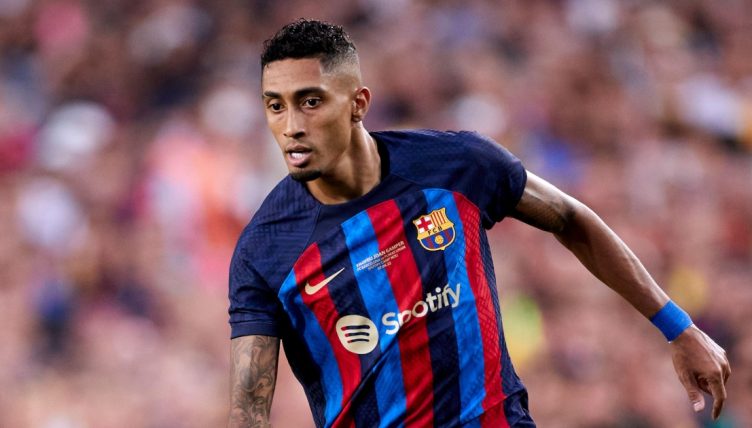 Football is one of life’s most effective forms of escapism and that sentiment never rings truer than during pre-season.

A new signing can represent a pleasant diversion from the daily grind. Glimpses of their ability, ideally through a snatched clip on social media, only heightens the feeling of excitement; we could all do with some light-hearted relief these days.

This brings us nicely to Raphinha, one of Barcelona‘s hoard of shiny new toys they’ve picked up over the summer.

Their transfer activity this summer, resemblant of a seven-year-old given free rein in the supermarket with their mother’s debit card, has caused an epidemic of raised eyebrows across Europe.

Barcelona are supposed to be skint yet they’ve signed five top-class internationals. More are rumoured to be on their way to Catalonia. It’s all very weird, a sensation heightened by talk of ‘financial levers’ as Barca scramble to register their new signings before La Liga commences.

All these financial oddities, apart from making you want to lie down in a darkened room, take away from football’s beautiful escapism. But Raphinha can become the antidote to all that.

The €58million signing from Leeds United has wasted no time showcasing his ability at Barcelona, from scoring a delicious volley on his debut to his screamer against Real Madrid in the United States.

But it’s Raphinha’s bewitching ball control that has underpinned his rise and a string of defenders from Pumas UNAM were left needing blood transfusions after exposure to the Brazil international’s footwork.

Barcelona were already 4-0 ahead in their last pre-season friendly before the 25-year-old collected the ball on the far touchline and dared anybody to dispossess him.

Two Puma defenders took the bait. As they drew near, signposting their apprehension with hesitant footsteps, Raphinha dragged his foot over the ball before flicking it through an opponent’s legs in a manner we’re legally obliged to describe as filthy.

With a bumper attendance of 83,000 in Camp Nou to watch the 6-0 win over their Mexican opponents, Barcelona have begun to reap the benefits of a summer in which they have looked to speculate to accumulate.

First have come the signings – Robert Lewandowski, Franck Kessie, Jules Kounde and Andreas Christensen have joined Raphinha at Barca – with revenue boosts, albeit through the sell-off of future income streams, following soon after.

“Barcelona is a commercial monstrosity, in my eyes it symbolises everything that makes modern football so ugly.”

And it’s true the financial situation has clouded Barcelona’s reputation across Europe.