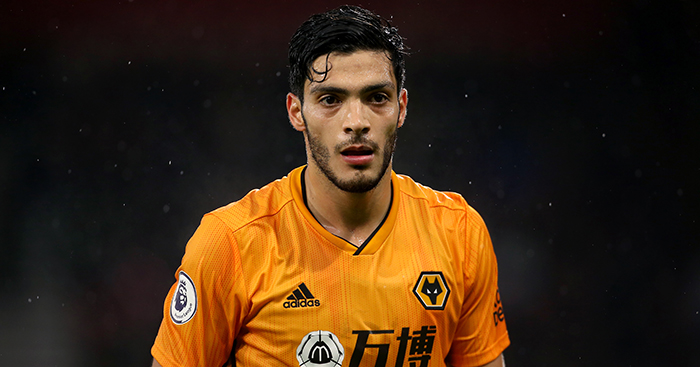 Raul Jimenez is scoring more than he ever has before. But his phenomenal assist in Wolves’ win over Braga shows another side to his game.

In the early stages of the 2018–19 season, Jimenez still had a lot of convincing to do.

Arriving on loan from Benfica where he had struggled to make the starting XI over three difficult years, the Mexican striker veered from great to awful in his first few games for Wolves.

A debut goal against 10-man Everton was a good way to start, but his next three matches produced three blanks, culminating in a horror show against West Ham.

Played clean through by Matt Doherty, Jimenez tripped over the ball. Was this why he had struggled to score in Portugal? Was he just a bit crap?

These days, you don’t see much of that clumsy figure who threatened — albeit very briefly — to become a major flop at Molineux.

In fact, today’s Jimenez is one of the most reliable and complete forwards in the Premier League, a ‘traditional number nine’ who scores a bucketload of goals and acts as a focal point for Nuno Espirito Santo’s frighteningly well-organised side.

And this Jimenez very rarely trips over the ball.

Against Braga on Thursday, the in-form striker scored again, taking his tally for the season to 15 in all competitions. But it was his two assists — one for Doherty, another for Adama Traore — that best demonstrate what a complete player Jimenez has become.

As a heavily built striker of six foot three inches, you expect him to score headers. Delicate scooped passes, on the other hand, were never in his job description.

Jimenez’s pass for Doherty was something else. Having already put his side ahead with a controlled header, the Mexican was clearly feeling confident.

But even the striker’s biggest admirer’s wouldn’t have expected the moment of magic he produced in the 33rd minute.

Collecting the ball midway into the Braga half, Jimenez used his strength and skill to hold off the defence before producing a pass that was more Cuauhtemoc Blanco than Steve Bull.

The striker saw the bursting run of Doherty and gently lifted the ball into a pocket of empty space beyond the helpless Braga defenders, leaving the wing-back unmarked and able to nod home.

This wasn’t just a brilliant piece of play from Jimenez. It was also a reminder of just how well Wolves are building upon the foundations of last season.

Striker hold-up play and attacking full-backs certainly aren’t new for the Midlands side — they’re integral features of their style of play — but rarely has the combination of the two been this thrilling.

In September 2018, Doherty and Jimenez produced comedy; against Braga they produced a thriller.

And Jimenez wasn’t done there. His ‘hat-trick’ of contributions was complete when he played in Adama Traore for Wolves’ third, collecting the ball on the edge of the centre circle before finding his teammate’s feet.

You can’t mark him; you can’t predict what he’ll do: wherever Jimenez goes, he causes havoc.

If Jimenez’s success proves anything, it’s that sometimes you just have to give a player time and trust them to come good.

After the first four matches of last season, many managers would have dropped Jimenez for his lack of goals. In fact, the actual Wolves manager might have considered it too — had the alternative been someone better than Leo Bonatini.

But Nuno stuck with Jimenez and saw him go from strength to strength.

For club and country, the striker now has 33 goals and 13 assists this calendar year, which is a frankly ridiculous tally for a player whose role is largely about bringing others into play.

His 15 goals in all competitions for Wolves this season is also the highest of any Premier League player — a stat warped by Wolves shooting very small fish in the Europa League qualifying barrel, but impressive nonetheless.

Last year, Jimenez was undroppable for both negative and positive reasons. He played all 38 of Wolves’ Premier League game, partly because there was no adequate deputy who could carry out his duties.

This year, he’s undroppable in the more widely used sense. Patrick Cutrone is an upgrade on Bonatini, but Jimenez is an absolutely critical part of this well-oiled Wolves machine.

If he can sustain form and fitness, he’ll be bloody hard to stop.