Remember hope, Arsenal fans? Nicolas Pepe is dishing it out in spades 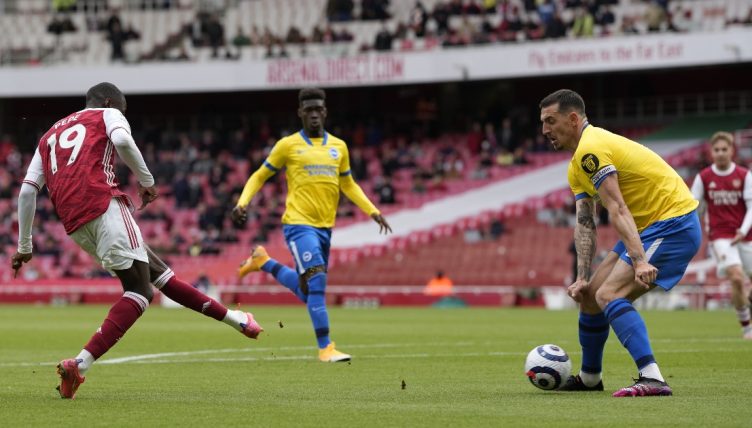 Arsenal fans are unlikely to have many fond memories of the 2020-21 season, and it’s fair to say that Mikel Arteta‘s first full campaign in charge has not been a time of great optimism at the Emirates.

No silverware, failure to qualify for Europe for the first time since 1995 and a second successive eighth-placed finish are bitter pills to swallow after over two unbroken decades of Champions League football under Arsene Wenger.

Outscored by Leicester City, West Ham and newly-promoted Leeds United, with the indignity of being dumped out of the Europa League by Unai Emery’s Villarreal and pipped to the new UEFA Conference League by their similarly in-crisis neighbours Tottenham, don’t expect a clamour for the season review DVD.

Perhaps it was a blessing in disguise fans weren’t allowed in until the final day. Having been outflanked by less well-resourced but cannier operators, it should be no surprise that supporters are incensed by the club’s downward trajectory.

Recruitment has been questionable to say the least, while Pierre-Emerick Aubameyang’s form since he signed a big-money new contract suggests the club has learned nothing from the Mesut Ozil catastrophe.

The decision to spend a club-record £72million fee on Nicolas Pepe, in particular, has not looked a sensible one, with the massive price tag a millstone around his neck since day one.

For such an amount, there would have been a reasonable expectation of a player that could hit the ground running from day one. Mohamed Salah had been signed for half as much just a couple of years prior by Liverpool.

But Pepe isn’t responsible for the fee Arsenal agreed to pay for his services, and slowly but surely he’s becoming the club’s most consistently dangerous attacker. With six goals in his last five starts to cap off 2020-21, there can be hope the Ivorian may finally help fire Arsenal back to where they feel they belong next year.

What. A. Run. Pepe! 👀 pic.twitter.com/jV4EFHqfhS

Ending the campaign with 16 goals and five assists in all competitions is a respectable return in an ailing, creatively stunted team, not least having spent a considerable portion of the season on the bench.

Some have suggested that Arsenal should have spent the money on Wilfried Zaha, who has averaged a goal or assist every 202 minutes for Crystal Palace this season. Pepe has averaged one every 139.

Much-hyped summer signings like Kai Havertz, Timo Werner, Hakim Ziyech, Diogo Jota and Ferran Torres have all been outscored by the Arsenal man. Gareth Bale and Edinson Cavani have deservedly had their dues but are still only level with him on 16 goals in all competitions.

Arteta may well wince when he looks back at costly dropped points in the early period of the season, when he persisted with starting Willian ahead of Pepe. The Brazilian, like Liverpool goalkeeper Alisson, didn’t open his account until May.

Ending up six points outside the top four, Pepe might well have helped turn a couple of defeats into wins when he was on the periphery as the Gunners won two of 12 Premier League games in a dire run-up to Christmas, although only he can be held accountable for his avoidable red card against Leeds and subsequent three-match ban.

The ‘what ifs?’ and the fine margins are painful, and ultimately moot, when it comes to reflecting on a disappointing campaign. But they can offer hope of better days to come.

Pepe has been at the heart of Arsenal’s uptick in form and arguably their best player in 2021, having capped off a much-improved season with a brace in each of his last two Premier League appearances.

He also appears to have regained Arteta’s trust, after the stony-faced Spaniard labelled his red card at Elland Road “unacceptable” back in November.

“He’s come a long way in terms of consistency and the games he’s producing,” Arteta said following Pepe’s double against Crystal Palace, having scored his first with a lovely cushioned volley at the end of a flowing move before putting the game to bed in injury time with a sensational solo run.

“It’s in his mindset. He wants to look at every action, every post-match reflection we do with him. When he has the talent he has it’s a really good mixture.”

Evidence of that was plain to see on the final day, with fans back in to cheer his contributions, looking every bit the dead-eyed reliable presence in front of goal that Arsenal have lacked without Aubameyang on song.

Drifting into an unmarked pocket of space in the Brighton penalty area, he decisively took the ball under his control and smashed it in at the near-post for Arsenal’s first before a more measured finish into the bottom corner for the second.

No longer a pariah – luckily for him Willian has arrived to take that role – Pepe is getting much closer to matching expectations.

For Arsenal’s sake, let’s hope he stays in a confident mood all summer and can start next season on a similar footing.