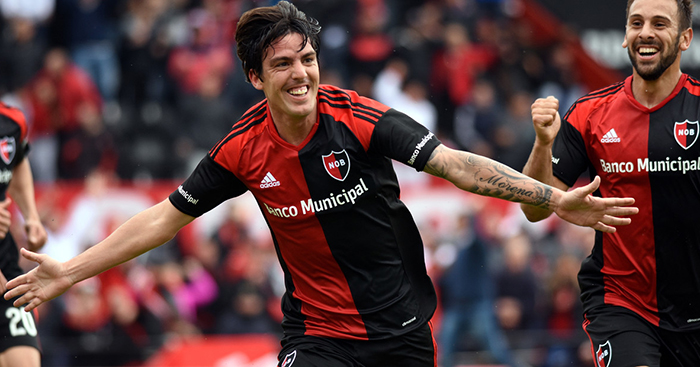 Fans of Newell’s Old Boys haven’t had much to cheer about about these past few years. Last season, they were deducted three points for debts owed to former players and finished 22nd of 28 in the league.

This term, they have a measly 19 points from their 16 games and are flirting with relegation, which in Argentina is decided on a three-year points average. For a club that has produced the likes of Lionel Messi, Jorge Valdano, Mauricio Pochettino and Gabriel Batistuta, it’s been a fair old fall from grace.

On Sunday night in Rosário, though, the men in red and black produced a performance to remind fans of the good times. The home game against Boca Juniors ended 1-1, but with Maxi Rodríguez making his third debut at the Estadio Marcelo Bielsa and scoring a worldy, things might just be looking up.

And if it hadn’t been for some eagle-eyed assistant refereeing and a desperate diving save from Esteban Andrada, the Lepers’ evening could have been even better. Mauro Formica – he of not-very-good-for-Blackburn fame – was on hand to provide two of the non-goals of the season.

The first, just a few moments after Maxi had pummelled the ball into the Boca net, was very nearly a thing of wonder.

Picking the ball up just inside the opposition half, he immediately gets closed down by Boca’s two left-sided Emanuels, Más and Reynoso, and, with nobody around him, looks utterly trapped.

Our man Mauro has other ideas. With one lovely flick of his right big toe, he leaves Más wondering why he even bothered getting out of bed, before charging down the touchline to collect the ball on the other side.

One more touch and a little gap opens up. Bang. Well, he couldn’t pass up the opportunity to shoot after that chapéu, could he?

Just in the nick of time Andrada manages to get down to tip it past the post, to the audible chagrin of the crowd. The disappointment was writ across his face, but Formica’s work (surface) was not finished.

Minutes later, after making a delightful diagonal run inside the visibly-still-tormented Más, Mauro is located with a precision pass over the top from Braian Rivero.

Formica turns towards the ball, flicks it up with a combination of chest and shoulder and flips over backwards, sending a perfectly timed bicycle kick into the back of the Boca onion bag.

Newell's have scored two of the best offside goals you'll see this season. This from Mauro Formica is stunning. pic.twitter.com/G9LKIcyL7i

The linesman, orange and yellow flag raised fastidiously in the air, is on hand to ruin everyone’s fun. Sometimes it would be better if the offside law could be overruled on aesthetic grounds.

That Formica even possesses the ability for such feats might come as a something of a surprise to Rovers fans.

Brought in by the disastrous double act of Steve Kean and Venky’s in the summer of 2011, he didn’t do a great deal to help Blackburn avoid relegation that season and eventually left for the sunnier climes of Palermo in January 2013.

“He is a fantastic talent, an attacking player – a little bit like a young [Gabriel] Batistuta”, said Steve Kean at the time of his signing. “He has great technical ability, a typical Argentine with a bit of fight and devilment in him. This guy can score goals and play last passes and create a goal out of nothing.”

Errrr, well… sorry, Rovers fans. Turns out Mauro is capable of much more than he showed during those luckless 18 months at Ewood Park.