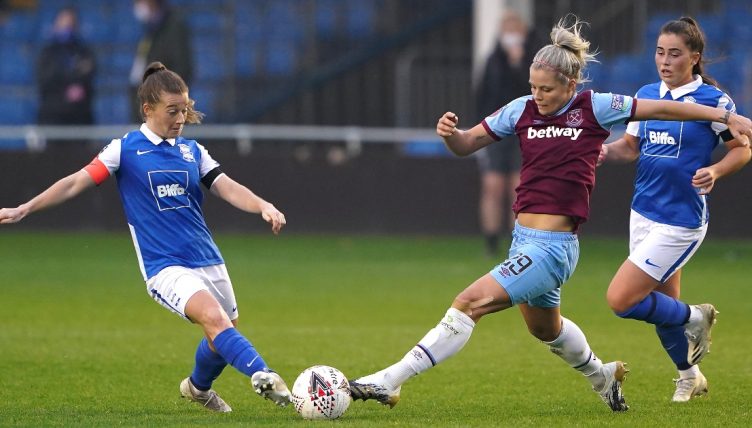 It’s never a good time to get relegated. If you’ve ever suffered a scrap for survival you’ll know how desperate it feels to will your points-starved players to pull something, anything, out of the bag when it comes to the crunch point of the final run-in.

That’s the hell four sides are going through in the Women’s Super League right now, with Aston Villa, Birmingham City, Bristol City and West Ham all at risk of relegation.

But this isn’t your ordinary bottom-of-the-pile battle. Oh no. This time, the stakes are much higher.

The recent broadcasting deal ensures a fat wad of cash for next year’s WSL contestants as well as the kind of regular exposure which opens the door to sponsorship, merchandise, a whole new world of revenue, the likes of which women’s football has never before seen.

The party’s about to start, and the unfortunate four at the bottom are fighting not to be the guy sitting on his couch at home with only warm lager and FOMO for company. With three points between the bottom four sides, each can count the number of chances to change their fortunes on one hand. So who will stay in the land of plenty, and who’s destined for the drop? Here’s the lowdown…

Matt Beard switching horses halfway through the race is plainly the sauciest story of the 2020-21 season, and a moment that could go down in history as an era-defining moment for either Bristol City or West Ham.

You’ve got to admire the man’s balls: getting sacked in November for leading the Irons into trouble, only to be hired weeks later for the very task his last bosses thought him unfit for – survival.

Straight from the East End frying pan into the West Country fire, no fear. It’s what you need in times like these.

And so far… he’s bossed it. Within a fortnight of his appointment, the Vixens had registered their first win of the season and, in his first five games in charge, Beard more than tripled their points total from two to seven.

With one of the youngest squads in the league and skipper Jas Matthews still recovering from foot surgery, Bristol will need leaders as they head into the final showdown. After joining from relegated Liverpool at the start of this season, Jemma Purfield is no stranger to a fight for survival and could provide a cool head, while City will rely on Ebony Salmon’s tenacity up top to power them through.

Their next match is a must-win. Beard’s players need to bring three points home from Villa, or they depend too heavily on the chance of snatching something from a Manchester United side hungry for European football or an in-form Brighton.

Speed, strength and the finish. ✨

Aston Villa are plainly in the driving seat going into the final stages. Of their final five games, this season’s newcomers have got four opportunities to steal points from relegation rivals. But will their faltering form prevent them from securing a second season in the top flight?

Undefeated in last year’s Championship-winning campaign, this will be a huge test of the team’s mettle. Having taken nothing from their last five WSL contests, the women in claret and blue will need to pull out some massive performances, and Saturday’s 8-0 FA Cup battering at the hands of Manchester City will have done nothing for their confidence.

As they prepare to face fellow strugglers, it’ll be less damage limitation, more fine margins, reckons interim gaffer Marcus Bignot. “Going into the run-in, it’s going to be about the team that makes the least mistakes,” he told VillaTV. He didn’t think to mention goals, though – some of those would be handy too. The Villans have notched just one in the last five games.

Mana Iwabuchi will prove vital in this department. Since her arrival in January, the World Cup Winner has scored and assisted 75% of Villa’s goals, including that worldie against Spurs, which decided the game and earned those all-important points for Villa while serving up a real treat for the rest of us WSL fans. Touches of magic like this could make all the difference.

Mana Iwabuchi smashes one into the top corner for Aston Villa Women against Tottenham Women!

Elsewhere in the West Midlands…

In the afterglow of their impressive FA Cup run, Birmingham enjoyed a purple patch early doors – earning three victories in five, bagging a Second City derby win, and scoring more than half their season’s goal tally across October and November. Everything seemed rosy and the bright spell forecast the kind of mid-table security they can now only dream of.

But they haven’t won since. Of all the stragglers, City are highest up the table but, only three points clear of 12th, they’ll need more than draws to keep them afloat.

Manager Carla Ward is the key player here. Everything stinks at Damson Park since the players’ letter of complaint over their treatment – detailing grievances over facilities, pay, contracts, the lot – was made public. With a host of distractions looming in the air, it’s up to Ward to keep her squad focussed on the task at hand.

She won’t plan on bringing anything back from Man City but, with the Blues then hosting three defeatable teams – Spurs, Villa, and Reading – there is no time like the present for the Blues to rid themselves of their no-home-wins curse.

If they can do it, the club have offered St Andrews as a venue for next season in the WSL – an olive branch that depends on the players overcoming the very obstacles they complained of.

The whistle blows on a snowy February weekend and it’s honours even in the Matt Beard derby. Cue shrugs and sighs from neutrals everywhere.

Both parties had something to prove when the Hammers hosted their ex-gaffer’s Bristol City, and the prospect of the visitors scoring a late winner and helping to send down Beard’s former side was tantalising.

The 1-1 draw left that golden question unanswered: who was responsible for the drab form in the lead up to his departure from Chadwell Heath – Beard, or his old players?

The scales are tipping ever so slightly towards the latter since Olli Harder’s appointment has made precious little impact to their fortunes. Come March, with just one point to show for 2021, Harder’s team had drifted to the dreaded bottom spot.

Then, from nowhere, the Irons pulled out a mad 5-0 defeat of Reading. As well as passing the hot potato on to Villa and dragging themselves out of the doldrums, West Ham rediscovered their team spirit at the most timely of moments, at the threshold of the run-in.

The players have got to seize their newfound vigour and run with it. A born leader and stalwart of the WSL, super skipper Gilly Flaherty will be the crucial catalyst in charging up the dressing room, with fight by the bucket load.

Full of belief following their bulldozing performance at the Madejski, the Hammers will fancy themselves to nick something from steady Everton. But Flaherty’s troops have to show up in the two contests against Villa if they want to survive.

Things you can do in 3 minutes and 55 seconds…