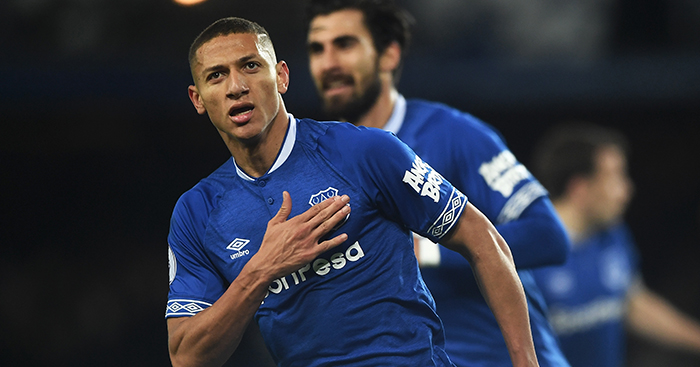 Brazilian attacker Richarlison has improved an Everton side that looked sluggish and disjointed last season. But can the club keep him?

Few Premier League teams have undergone a transformation as radical as Everton’s over the last year.

Last season, the Toffees laboured under the muddled and defensive tactics of Ronald Koeman and Sam Allardyce. Their squad was lopsided, burdened with too many slow-moving midfielders like Wayne Rooney, Gylfi Sigurðsson and Davy Klaassen. Goals were expected from the under-qualified Oumar Niasse.

This season’s Everton are a different beast.

Marco Silva has brought in dynamic and skilful players, removed the plodding Rooney and introduced the kind of entertaining football that fans so craved during the Allardyce era.

Progress has been gentle, of course. And the club may yet finish no higher than last season. But Silva has answered many Goodison prayers, and the mood around the club has improved.

I love us blues are enjoying the ride under Marco Silva. Normally I’d be dying inside but somehow all I can see is the good things 💙 it’s like being on a rollercoaster supporting the blues but I’m loving it #efc

Key to the new-look Everton is Richarlison. Brought in for a hefty sum that could rise to £50million, the former Watford player has, along with the likes of André Gomes and Lucas Digne, injected speed into a formerly snail-paced team.

Everton’s biggest concern right now will be keeping hold of their new star.

Richarlison already looks miles better than he did last year.

So far this season, the forward has played well as both a winger and a central striker, grabbing goals from either position. Ahead of Monday night’s clash against Watford, his old side, he had found the net seven times in 13 appearances.

That became eight within 15 minutes of the match.

Although Richarlison’s performance was uneven, his instinctive goal was typical of a player in form.

There was an air of inevitability to it, too: before the match, Watford’s Troy Deeney had tempted fate by jokingly planning to “smash” his old team-mate. He probably wished his defenders had been as forthright.

Silva, however, has hinted that the Brazilian should actually be scoring more. “I am happy with him, but I still think he can do better in terms of goals,” he said over the weekend. “He certainly has the quality.”

Everton fans would agree that Richarlison is not yet the finished article. Although his goalscoring return is good, his decision-making this season has not always been. Against Watford, he occasionally struggled with the less glamorous centre-forward duties, losing several physical battles with Christian Kabasele.

And the club will be wary of what happened last season, when he scored his final goal of the season in mid-November.

Watford boss Javi Gracia clearly hasn’t forgotten it. In his press conference after the 2-2 draw at Goodison, he noted that Richarlison’s opener was “the first goal I’ve seen him score, because he didn’t score for me last season!”

Though Everton will be happy with the upgrade on Niasse, Richarlison’s goals come at a certain cost: each increases the likelihood of his eventual departure.

Ahead of the Watford match, the Daily Star suggested that Barcelona may be looking at the in-form Brazil international. Yes, yes, we know. (The other names on their shortlist? Harry Kane and Kylian Mbappe, apparently.)

Dubious though that story may have been, Everton fans should be aware that their new forward — like their new manager — has a reputation for climbing the ladder when opportunity beckons.

Should he keep up his form, he might not stick around forever.

While playing for Fluminense in 2017, Richarlison effectively ‘did a Mario Götze’: just days before his side were due to face Palmeiras, the forward opened talks with the opponent over a potential transfer, infuriating Fluminense fans.

He moved to Watford less than two months later.

In truth, though, Everton probably aren’t expecting years of commitment from their new investment, despite the 21-year-old claiming to have followed the Merseyside club “a lot” as a child.

This is a player who is clearly not afraid to move when the time is right. But this attitude shouldn’t attract criticism from Watford fans, Everton fans or anybody else.

After all, while the forward certainly increased his salary after each move, his handful of transfers over the last few years have all been suitable ones, helping him take his game to the next level.

After forcing his way into the international setup this year, Richarlison has more than vindicated his decisions.

Making the most of it

Richarlison may not be a Toffee for life, but he and his employer now have an opportunity to build on their promising start to the season. If the Brazilian keeps up his current goalscoring rate, he will easily hit the 20-goal mark.

Realistically, however, that will only happen if Silva can find a way to make his entire forward line tick.

And that will be no mean feat. At present, Everton seemingly need a Richarlison both on the wing and up front. Cenk Tosun and Theo Walcott have just two goals apiece, while Bernard is yet to open his account.

Needless to say, the club will not achieve their ambitions without improvement from those players.

Still, Everton are now in the enviable position of seeing how a full season of Silva and Richarlison could pan out.

When Watford dismissed the Portuguese manager in January, the form of his star pupil nosedived. If the Goodison hierarchy remains confident in the manager’s positive philosophy, it could yet see greater returns from the talented attacker.

How the Barcelona contingent is making a difference at Everton