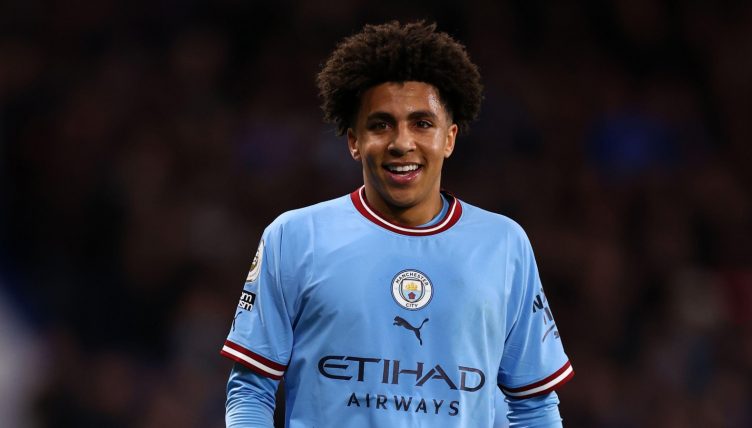 Philipp Lahm was arguably Pep Guardiola’s perfect player: intelligent, versatile, talented and with the rare ability to raise the performance of those around him. Rico Lewis is fast becoming his successor.

Born as recently as November 2004, Lewis has usurped both Kyle Walker and Joao Cancelo en route to becoming the breakout star of this Premier League season.

Essentially press-resistant, the 18-year-old is a menace both with and without the ball and exhibits a maturity beyond his tender years.

Izzy Christiansen, covering the match for Sky Sports, explained: “He’s more reliable in possession. His close control is exceptional and he releases the ball at the right time. He’s got massive defensive instincts.

“Pep Guardiola knows how good he is and every time I’ve seen him play this season, Kyle Walker brings a more dynamic style to his play, but Guardiola wants control of the game.

“Right now, Rico Lewis is giving him that control because his game understanding is years beyond his age.

“In the first few seasons under Pep at City, the full-backs were overlapping and underlapping. We don’t see that so often now as the modern full-back in Pep’s system is Rico Lewis.”

As City overturned a two-goal deficit against Spurs, in one of those contests that was anything but predictable, Lewis was the stand-out performer as Guardiola bristled on the touchline.

Having gone 2-0 up at the end of the first half, Spurs were pegged back by goals from Julian Alvarez, Erling Haaland and Riyad Mahrez at the start of the second. However, the Londoners were not yet out of the game entirely.

Dejan Kulusevski romped down the right wing, sent clear by a cute reverse pass from Harry Kane, and cut a delicious cross back from the byline.

Son Heung-min, living out his own personal nightmare this year, missed it entirely, but it flew through to Ivan Perisic who would surely tuck home the equaliser.

But wait. Flinging himself in the way, like a brave Tommie spotting a live grenade and taking one for the team at the Somme, Lewis somehow managed to deflect the ball onto the bar and away from immediate danger.

The packed away end convulsed in disbelief and frustration. Lewis picked himself off the turf and set about defending the corner. On the touchline, Guardiola presumably allowed himself the thinnest of smiles.

“That young lad deserved his luck with the Perisic chance,” Carragher told Sky Sports. “What he’s doing now at 18… it’s not just playing the position he’s playing – it’s his tactical understanding to go into midfield.

“He’s playing ahead of England’s right-back. At 18, to be taking the place of a seasoned international – a guy who has won almost every trophy you can win.

“I don’t think it was a case of rotation tonight. I don’t think Pep was happy with Kyle Walker at Old Trafford, and this lad has been absolutely outstanding every time he’s played and [Guardiola thought] ‘I’m going to put him into a huge game that Manchester City have to win’.

“They had to win, and he was absolutely fantastic. When Pep Guardiola came into the club six or seven years ago, you could see in his first game what he wanted from his full-backs.

“It’s not something that’s grown over time as you could see it straight away. Lewis would’ve been around 11 then in the academy, so it’s something which would’ve been fed down the age groups very early on.

“It’s gone right through the academy how Guardiola wants his full-backs to play so he’s been trained to be like this over many years. Even though we’re lauding him for doing it, he’s probably used to playing in this way, week in, week out with the junior sides.

There’s even rumours of an England call-up for March’s European Championship qualifiers against Italy and Ukraine.

Which, considering Lewis is the result of Guardiola’s 15 years of tactical tweaking to create the perfect footballing specimen, can hardly be considered a surprise.

READ NEXT: Wayne Bridge: I didn’t see my quality & thought Man City paid too much for me

TRY A QUIZ: Can you name every player Pep Guardiola has used at Man City?