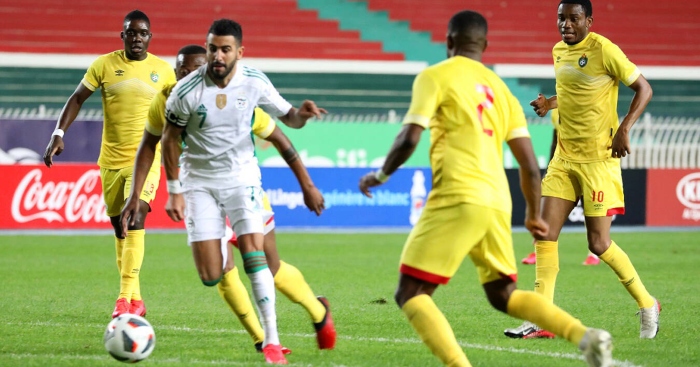 Manchester City fans will know all about Riyad Mahrez and his ability to catch the eye with wonderful skill on a football pitch.

Well, Zimbabwe definitely recognise that now, having been torn apart by the winger during Algeria’s 3-1 win against them in the African Cup of Nations qualifiers.

Largely thanks to Mahrez’s contribution, Algeria sit top of their group with nine points from three matches, while Zimbabwe are second with four points.

There was plenty to admire from the 29-year-old throughout the game, but his run and delightful finish to get Algeria’s third of the match tops it all.

We begrudgingly accept that there was a bit of luck in his initial pass coming back to him after being cut out, but everything that comes after that epitomises his audacity and ability.

There was a sense of desperation emanating from the Zimbabwean defenders, but their heightened urgency wasn’t enough to help them prevent Mahrez* from cutting them open before dinking the ball into the back of their net.

It seems like the winger is only willing to score goals that are worthy of going viral this term, as his solitary City goal so far is the one against Leicester City where he absolutely walloped it right into the top corner.

While Mahrez didn’t taste victory that day, there is no way his performance for his national team was going to get anything less than three points.

His assist earlier in the game was a thing of beauty too, as he had worked his way out from the corner before whipping in a wonderful cross for Galatasaray winger Sofiane Feghouli to head in.

Mahrez truly took Zimbabwe to the sword with this performance, but more importantly, he did it with style.

*Buy Riyad Mahrez and thousands of other players on Football Index. 18+, UK and Ireland customers only, begambleaware.org. T&Cs apply.