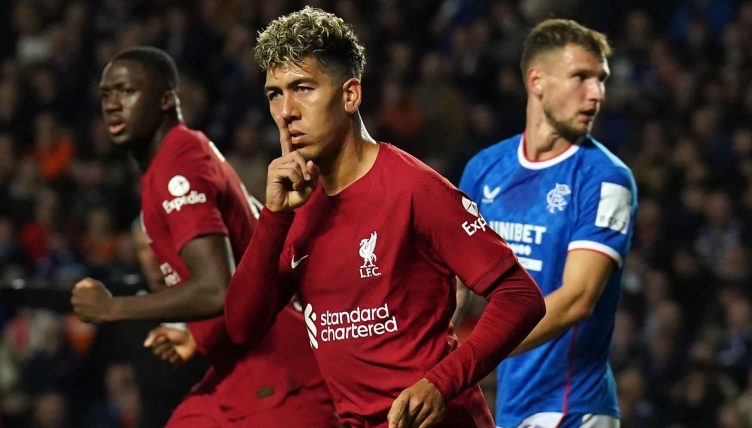 To say the atmosphere at Liverpool is edgy at the moment is like describing the mood at Downing Street as a little uneasy.

You only need to see how Jurgen Klopp responded to comments put to him by Didi Hamann, or how Jordan Henderson lost his cool against Arsenal, to gauge that all is not quite right an Anfield.

If you browsed the #LFC hashtag on Twitter in the moments after the Liverpool teamsheet dropped for last night’s match away to Rangers, you might have assumed Klopp had selected a team of one-legged chancers. Mohamed Salah and Diogo Jota had dropped to the bench, while Trent Alexander-Arnold and Luis Diaz were sidelined after suffering injuries in Sunday’s 3-2 defeat at Arsenal.

Sure enough, things were in danger of turning toxic when Scott Arfield put Rangers ahead in the 17th minute.

But Roberto Firmino does not strike you as the type of guy that pays attention to Hamann’s latest musings or what’s being said on Liverpool twitter. You imagine the Brazilian turns up to training every day with a big smile on his face whether Liverpool are chasing the quadruple or scrapping in midtable.

That’s precisely how Firmino has ended up enjoying his own best spell of form in five years as Liverpool endure their worst start to a season in a decade. He’s registered eight goals and four assists in all competitions for the Reds this season, averaging a direct contribution to goal every 58 minutes. Where would they be without him?

The 31-year-old forward, who is into the final year of his contract at Anfield, is producing the goods just as he was beginning to look dispensable.

Firmino was a guaranteed starter in the early years of Klopp’s reign, a key player as the Reds won the Champions League and Premier League in successive campaigns, but the additions of Diogo Jota, Luis Diaz and Darwin Nunez have threatened to push him to the periphery.

Either he hasn’t noticed or just doesn’t care. Where others in the Liverpool team are wilting as the heat turns up, Firmino is casually going about his business, totally and utterly untroubled by the wider picture.

Within 10 minutes of Arfield’s opener, Firmino quietened a bouncing Ibrox by nodding home the equaliser. Ten minutes into the second half, he put Liverpool ahead by getting on the end of Joe Gomez’s Alexander-Arnold-esque cross.

Then, in the 66th minute, came his finest moment. Slipped through by Fabio Carvalho, Firmino had the time and space to take a touch, run into the box and complete his hat-trick, as any normal centre-forward would.

Firmino sets it up, Darwin Núñez puts the finishing touches on it 🥶

Liverpool are getting the job done in Glasgow 💪#UCL pic.twitter.com/iMi8sXOj7f

But Firmino is no normal No.9.

If you’ve consumed thousands of hours of football, your brain is hardwired to predict what comes next. Like an xG supercomputer using an algorithm to work out the probability of any given chance.

Or maybe you knew, because you know who Firmino is and what he does. On repeated viewings it was obvious: he just pulled off the most outrageously casual assist you’ll see all season.

Who needs a hat-trick when you can set up a goal in style?

That’s two goals in as many games now for Darwin, giving the big-money summer signing a much-needed confidence boost after a difficult start.

“The goal will come. It’s like ketchup, when it comes out a little, it all comes out,” the Uruguayan said amid a frustrating spell. That’s certainly the case when you have team-mates as selfless as Firmino.

That’s the thing about Liverpool’s No.9. He’s infectious. Not only did he pick up a well-deserved Man of the Match award, but he heartened both Gomez and Darwin in the process.

He was off the pitch by the time Jota assisted all three goals as Salah completed the fastest hat-trick in Champions League history, but it’s difficult to imagine Liverpool completing that 7-1 rout if Firmino hadn’t been on hand to turn down the temperature.

All the usual caveats apply. Rangers, for one. Liverpool’s number nine playing centre-stage in Liverpool’s 9-0 thrashing of Bournemouth didn’t fix Liverpool’s ills and neither – in all likelihood – will this.

But it’s hard to look at Firmino flashing those pearly whites and waving to the camera and not believe that everything will be alright in the end.