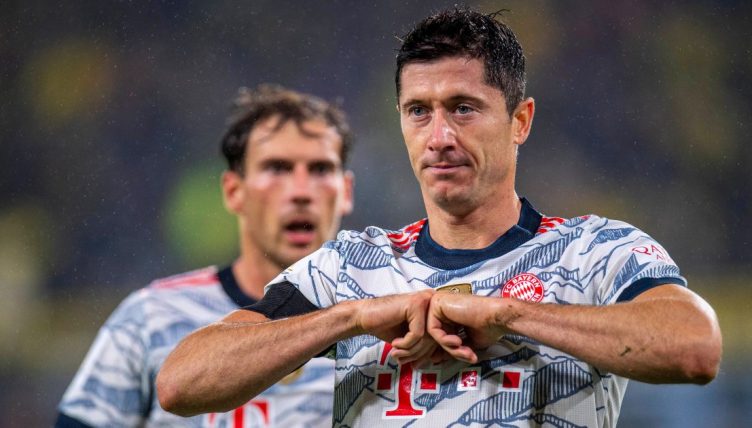 Robert Lewandowski went into the May 2021 encounter with Augsburg having scored 40 Bundesliga goals during Bayern Munich‘s title-winning campaign, equalling a record set back in 1971-72. Throughout the game, he spurned numerous opportunities to write himself definitively into history.

But, as the seconds ticked away, Augsburg goalkeeper Rafal Gikiewicz spilt a Leroy Sane shot and the opportunity for immortality presented itself. Lewandowski rounded Gikiewicz and rolled the ball into the net, to kick-start the mutter und vater of all celebrations.

The intensity of which Lewandowski celebrated his achievement was the ultimate compliment to the man whose record he broke – the peerless Gerd Muller.

Muller is the only man to have scored more Bundesliga goals than the Poland captain – 365 to Lewandowski’s 277 – and his death on Sunday at the age of 75 sent German football into mourning.

Upon equalling Muller’s 40-goal tally at Freiburg, Bayern’s current number nine lifted his jersey to reveal a T-shirt with a vintage stencilled image of a mop-topped Müller, annotated with the words “4ever Gerd”.

And Lewandowski’s record-breaking 2020-21 season felt so significant because nobody believed Muller’s record would ever be equalled or surpassed – the definitive sign of respect for the 1974 World Cup winner.

As Bayern plan a fitting tribute for Muller over the coming weeks, his death was acknowledged before the Super Cup final against Borussia Dortmund.

Once the memories had been recalled and appreciation was shown by the spectators present, Lewandowski continued his own personal homage to Bayern’s greatest-ever goalscorer with two goals in a 3-1 victory.

With a breathless first-half nearing its conclusion, the 32-year-old raced into the penalty area in the manner of an aeroplane landing at Chopin Airport to meet Serge Gnabry’s cross.

The bullet header that followed was beautiful in its brutality, entrancing because of its efficiency. Gregor Kobel stood no chance.

Lewandowski relishes playing against his former club. Since leaving Dortmund on a free transfer in 2013, he’s scored 24 goals against them in 24 matches in the footballing equivalent of posting selfies of your new relationship online with the sole intention of rubbing your ex’s nose in it.

And he punished Dortmund again in the second-half after Marco Reus’ great long-range strike had threatened a comeback.

Dortmund were caught out playing silly beggars at the back, allowing Corentin Tolisso to steal the ball with the grace of a Victorian pickpocket and feed Lewandowski. The finish? Well, you don’t become one of the best strikers of your generation without making it look easy as Lewandowski did here.

Even as he enters the autumn of his career, Lewandowski shows no signs of slowing down. Bayern are under the management of Julian Nagelsmann, whose wardrobe makes Pep Guardiola look like Tony Pulis, and his intensity will mean standards will be fiercely maintained.

On a personal level, Lewandowski will be pushed by Erling Haaland for the Bundesliga Golden Boot and the hope is that both strikers will engage in a thrilling back-and-forth this season.

But Tuesday night was all about paying tribute to one of football’s true greats and Lewandowski’s two clinical finishes felt like the perfect homage to Muller’s memory.