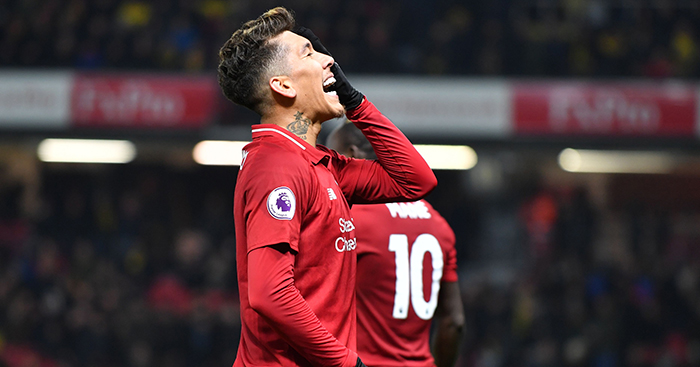 Roberto Firmino has had a relatively quiet season in front of goal, as anyone with the Liverpool forward in their fantasy football team will testify.

The Brazilian’s goal against Watford was only his fifth of the season, and just his third in the current Premier League campaign, after three straight double-figure domestic seasons for the Reds.

However, if you’ve been paying any attention to Firmino’s time at Anfield, you’ll know exactly where his priorities lie.

The no-look finish has become a Firmino trademark, as if he will decide from time to time a goal on its own is useless without an added layer of arrogance.

It has created a problem, though, albeit one which is not beyond his comprehension: once you’ve mastered no-look goals, where do you go from there?

Firmino seems to enjoy playing against Watford, having found the net against them with a flying backheel last season and added another strike at Vicarage Road on Saturday.

However, simply tucking the ball into the back of the net was never going to be enough to ensure he’d be pleased with his afternoon’s work, especially if doing so only served as the cherry on top of the cake.

What was more important was to truly ruin an opponent’s afternoon, to coax them into scratching their head but missing. In this case, Firmino achieves it with not just a no-look nutmeg but a nutmeg on a man who isn’t even in shot when he receives the ball.

Troy Deeney has spoken before of responding strongly to disrespect, specifically in relation to rabonas from Dimitri Payet and Manuel Lanzini in the same game in 2016, but here he seems to instantly know he has to take the L.

The striker’s reaction is to slowly jog away in the hope that no one will notice what has happened, like someone running their fingers through their hair after being left hanging on a high-five.

Last season’s goal might have been more painful for Watford at the time, but it was soon replaced by more in the ‘against’ column to help take their collective mind off it.

Firmino can appreciate the flaws in measurable events when it comes to doing long-term damage: it’s much better to leave opponents stung by something where not only is there no comeback, but the events will follow them around forever and haunt their dreams.

All of this would be special enough if it was the only time this season Firmino had reached out and snatched away an opposition player’s soul, but we can’t even restrict him to that.

Earlier in the season, during Liverpool’s 4-1 victory over Cardiff, he left visiting midfielder Victor Camarasa wishing he’d never come to the Premier League in the first place.

Not only did Firmino pull of a no-look nutmeg on the Spaniard, but he did so while literally on the ground – he effectively transferred his ‘sat down’ energy to another man, which most of us didn’t even realise was possible.

If you ever find yourself in Camarasa’s shoes in that kind of situation, your options are going to be limited: you can hack at Firmino in a misguided effort at revenge, you can sit down on the touchline and openly weep for five or six minutes, you can retire from football altogether with your head held relatively high, or you can complete the game with an elongated sigh drawn across your face for however long is left until full-time.

Cardiff will be grateful he chose the final option, but all it means for Firmino is he’ll need to work that bit harder to step things up a level in the return game.

In the year 2048, a 60-year-old Troy Deeney – fresh from managing his Watford side to a comfortable 3-0 victory over Liverpool to take Watford into the top six – will give himself an early night as a reward for a job well done.

He falls asleep almost immediately as his head hits the pillow, drained from an afternoon of intensive work from the touchline, and has an extremely lucid dream. This is rare, he thinks – normally he can barely even remember his dreams, let alone become aware of them while they’re happening.

Deeney would try to wake himself up, but his dream self is back playing football, and it feels soothing. In his unconscious state he can feel the Anfield turf beneath his feet, bounding towards the ball as it comes into view in the middle distance.

Suddenly, though, and without warning, he finds himself losing all control. There’s a falling sensation, but he seems to still be vertical, albeit with the clear air in front of him replaced by a blinding white light.

He’s uncomfortable now, trying to scream out and wrest himself from the nightmare, but all that happens is the light gets brighter and ever more pervasive.

Eventually the camera in his head pans back out and… wait… that’s not a bright light. It’s Roberto Firmino, grinning from ear to ear with his luminescent teeth staring him in the face.

The last thing Deeney hears before he wakes up sweating is a single word.