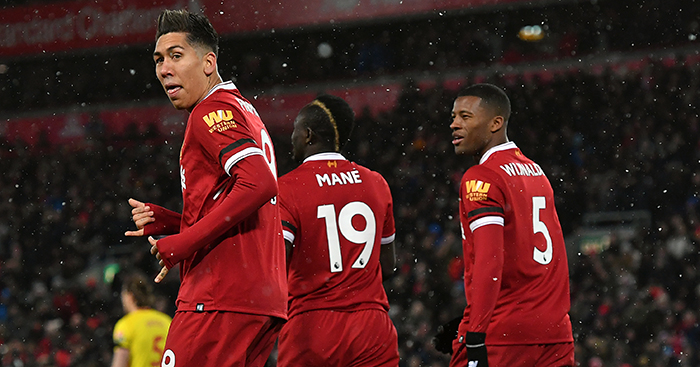 Some people might argue there is absolutely no need for Roberto Firmino to keep pulling out the no-look finish for Liverpool. But those people would be very wrong.

You might be waking up this morning, opening up Planet Football and preparing yourself for me to wax lyrical about Mohamed Salah. Well, that would be too easy, and I’ve never been one to take the easy way out.

Sure, I could talk about Salah’s sick sense of humour in using Odion Ighalo’s trademark ‘Iggy Chop’ to score against Ighalo’s former club, or try to figure out how he scored from that ‘impossible’ position you’ve seen doing the rounds on social media, but there’s not much to be said about the Egyptian’s quality that I haven’t already said on this very site.

And besides, he’s not the only man from Liverpool fans’ ‘Sugar Sugar’ chant to find the net in style against Watford on Saturday evening.

In isolation, Firmino’s flick to give the Reds a 3-0 lead is a nice, enjoyable goal and no more.

The Brazilian makes a good run to get between a couple of Watford defenders, and his finish is smart enough to find the target while deft enough to prevent Orestis Karnezis getting anything in the way by sheer force of instinct.

We’ve seen other players pull off similar moves, not least Danny Welbeck for England at Euro 2012, but Firmino’s movement almost urges you to look closer, at which point you realise that yes, in a manner of speaking, it’s another trademark no-look finish from the Liverpool man.

Another no-look goal from Firmino. pic.twitter.com/hOZm8oeRhs

The no-look finish is up there with the rabona and the seal dribble when it comes to skill far outweighing necessity.

It’s the sort of thing which adds nothing to the end result, save for showing your opponent you can – almost literally – beat them with your eyes closed.

It’s football’s equivalent of spinning the ball on your finger from a member of the Premier League front three which most closely resembles the Harlem Globetrotters when in full-flight.

Firmino’s most recent example of a no-look finish, prior to the Watford game, came against West Ham last month. And, while the goal against the Hornets was more technically impressive, the one against David Moyes’ club was surely more emotionally devastating.

After rounding Adrián, there was nothing difficult about the open-goal finish from close range. He could have tapped in with his right or left foot as normal, but to opt for a no-look finish – coupled with an over-extravagant celebration – was statement-making.

It’s the equivalent of getting down on your knees and heading the ball across the line, but without the risk of getting your hands dirty, and to celebrate as if he’d just netted a 30-yard screamer is the sort of opponent-baiting which we all ought to be able to get behind.

Of course, sometimes riling up your opponents in this way can backfire. Firmino’s third against Sevilla in the Champions League, for example, while intended as a flourish on top of an already comprehensive victory, instead acted as a catalyst for the hosts to come back into the game.

And, frankly, if someone did this to you then you’d want revenge too. It’s like the favourite on the start-line of a race goading his opponents, even while knowing he’s streets ahead of them on paper.

Nine times out of 10 the goading will act as unnecessary extra pain for the lesser of the competitors, but then there’s the 10th.

This finish was Dr Evil locking Austin Powers in a room full of sharks with lasers attached to their heads. The second half was Sevilla realising what they thought were sharks were actually seabass.

While the idea of Firmino patenting the no-look finish as part of his graduation into Liverpool’s destructive attacking trio is a very tempting one, the inconvenient truth is that this goes all the way back to his Hoffenheim days.

The finishes against Watford, West Ham and Sevilla all came with his team already two goals to the good, putting the gloss on an already-impressive performance against a defence who had been breached plenty of times already and which he had reason to believe could be breached again.

However, to do the same in the 19th minute of a goalless game away from home feels more impressive due to the potential downside. Indeed, that was the only shot Firmino – or indeed Hoffenheim as a team – got on target in the entire game.

It ought to account as a high-stakes gamble, and it certainly would, were it not for the fact that in Firmino’s mind there’s zero risk involved.

This finish for Hoffenheim against Werder Bremen isn’t a difficult one for a player of Firmino’s quality, but nor is it the easiest…unless you’re absolutely certain in your own mind you’re scoring the chance 100 times out of 100.

The margins at the top level of European football are so tight that there are few areas where there’s still any sort of opportunity to get one over on your peers.

It seems unlikely that anyone will match the goal tallies of Ronaldo and Messi’s peaks with any sort of regularity, while only one person will ever have the honour of scoring the best goal of any given weekend, but if there was a stat for time celebrated per goal scored, Firmino would surely be the continental leader.

It’s all about fine margins, and he’s nailed it.

Inevitably, the no-look goal will inevitably draw complaints from those who mistakenly believe football is about scoring more than your opponent rather than showing off at every opportunity and making grown men froth at the mouth just for the sake of it.

The logical progression at that point will presumably be a pivot to no-look assists.

And there’s no need to worry – Firmino’s already got that covered too.