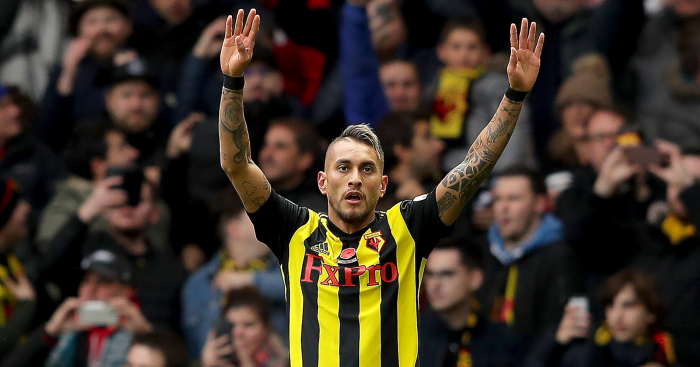 Sometimes a goal can be scored thanks to both individual brilliance and collective failure. As Roberto Pereyra showed for Watford against Huddersfield Town, that’s no bad thing.

There must be something about the changing of the season that brings out this kind of magic, because Watford’s Roberto Pereyra has scored a goal which – if not quite as extravagant – made those trying to stop him look just as stupid.

Were it not for injuries over the last two seasons, we’d probably have already been talking a lot more about Pereyra as one of the biggest talents outside the top six.

The Argentine had already bettered his Juventus goal tally before Saturday’s victory over Huddersfield Town and, more important than any of those goals, he made Sadio Mané look like a chump during last season’s 5-0 defeat at Liverpool.

The laws of football don’t yet allow this sort of thing to count for multiple goals in its own right, but I’m sure we can agree it is only a matter of time before the powers-that-be see sense and give this technique the reward it deserves.

For now, though, Pereyra has accepted you need to follow it by slotting the ball past the goalkeeper, and he has graciously lowered himself to the level of football’s also-rans and agreed to do things the boring way.

Thankfully, though, he has still been able to add a bit of decoration even when there’s a goal at the end of the move.

When Pereyra collects the ball on the left, it doesn’t look like there’s a lot of danger – or at least that would be the case if you hadn’t seen his goal against Leicester City in his first Watford season.

On that occasion, we saw him pick his spot almost prior to receiving possession, before beating two defenders, making sure the spot was still available, and floating the ball into the far corner with such ease that you almost expect him to turn away before the ball hits the net, certain he has achieved what he set out to do.

He’s like a golfer mentally holing his putt when the ball is still on the fairway, or a funfair veteran strolling up to the ring toss and nailing it without even needing to size up the task.

The jink past Erik Durm and Mathias Jørgensen to begin the move is one of those moments you catch in matchday highlights and just sense it’s the start of something bigger.

In the Huddersfield duo’s defence, they probably weren’t watching that much Premier League football back in November 2016, or else they might have tried harder to cut him off at the source.

As things progress, though, you begin to realise whatever the Huddersfield players try will fail: while Pereyra moves the ball with his feet, his hands are working double-time to conduct the movement of those around him and open up a path to goal.

It’s one of those goals where the thought process of the observer changes direction as many times as the Watford man himself, from ‘fantastic goal’ to ‘terrible defending’ and back again, almost infinitum, until you realise it can be both; and, indeed, it can be one because of the other.

The principle is one we saw with Dimitri Payet’s goal of the season contender for West Ham United against Middlesbrough in 2016.

Defenders losing all control of their faculties, consumed by fear and dread, is not something which happens in a vacuum: each one of an attacker’s past actions is contributing to the standoff, be they in the game in question or the games before, and Pereyra – like Payet before him – has ready currency in the form of what he might do.

As he breaks into the Huddersfield box, there are three players lining up to block his path: Chris Löwe, Philip Billing and the recovering Durm. It is testament to Pereyra’s movement that even a combination of the three isn’t enough to constitute one full defender.

It’s like a Gladiators contestant taking advantage of a glitch in the gauntlet game whereby Wolf and Cobra stand on the fringes smoking a fag, clearing a path that’s not only empty but also nicely padded along the way.

Löwe’s dangled leg may look weak, but he can, at least to a point, be forgiven for positioning himself in a way that forces the former Juventus man into traffic rather than letting him drive into the empty space behind him.

Little is he to know that, not only is the traffic in near gridlock, but the motorists are mounting the kerb or driving into the back of one another in an effort to escape.

Billing moves like a man whose shoelaces have been tied together, and it feels like his mistake is trying to match Pereyra stride-for-stride while the Watford man (a) has deliberately shortened and quickened his steps at will and (b) has the advantage of forward planning.

This make’s the Dane’s task about as easy as cycling while wearing clown shoes, and he pulls it off with all the grace you’d expect of someone volunteering for the role.

Durm offers the last line of defence, at least in theory, but can you really blame the German for his reluctance to get too close? He’d much rather be able to give the universal gesture of “what more could I have done?” than dive in and remove all doubt.

Speaking of which, Löwe might have been plagued by the notion that he didn’t quite embarrass himself enough for Pereyra’s strike. Thankfully, though, Gerard Deulofeu was on hand to give him another chance not too long after.

It’s lovely when you can get closure before the 90 minutes are up.