Roma, Liverpool and how former icons can inspire new heroes 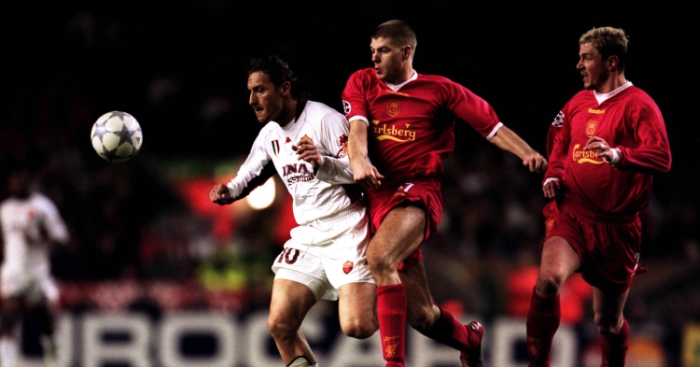 When Roma visit Liverpool on Tuesday night, both clubs will need to draw on the inspiration of former heroes as they bid to reach the Champions League final.

Kostas Manolas’ late goal might have sealed Roma’s sensational comeback against Barcelona at the Stadio Olimpico, but there was another moment which characterised the switch from possible to probable.

After squeezing his penalty beyond Marc-André ter Stegen, Daniele de Rossi let out a guttural yell, the kind of scream you could hear with your eyes. If you didn’t already know the comeback was on, that sealed it, and Manolas’ goal almost felt inevitable.

However, in seeing the raw emotion from the one-club man, we got even more of a reminder of another who wasn’t on the pitch: Francesco Totti may have retired from football last summer, but he was there in spirit as Eusebio di Francesco’s team made history at the Stadio Olimpico.

They only need one more! 👀 pic.twitter.com/hsBoOz23IP

The need for a local presence at a football club can often be overstated, and a local connection alone is never quite enough without the quality of football to match, but that blend of ability and feeling at home somehow manages to elevate both at once.

It’s the reason Wilfried Zaha has admitted to reservations about leaving Crystal Palace for a second time, and why Steven Gerrard and Jamie Carragher were capable of De Rossi and Totti levels of longevity at Liverpool.

Upon Totti’s retirement, Gerrard spoke of the Italian international’s “buzz” coming from making the people of Rome as happy as himself, and it seems fitting that, as the two clubs prepare for their first crack at a Champions League final without an inspirational local figure, they will be doing so against each other.

People complained about Totti’s ‘cheesy’ selfie celebration after scoring against Lazio, but to do so ignores the first part of the celebration; the rush to share his excitement with the fans by leaping over barriers and getting as close to them as was feasible.

That goal in the Rome derby came at the tail end of Totti’s career, when he had shed his flowing locks in favour of a more ‘sensible’ haircut. It was as if he decided he would need to stop looking like a professional footballer and begin to take on the look of someone who could blend into a crowd in the middle of a Roman piazza.

Of course such a thing will never be possible – Totti is Totti, and will always be unmistakable – but perhaps it allows him to make his own way in a new chapter, distinct from the most famous goal in Giallorossi colours.

The long-haired Totti will be immortalised in time, forever allowed to live on in replays of goals which only men in their athletic and creative pomp are capable of producing.

The stand-out, undoubtedly, is the solo effort which put Roma 3-0 up away from home against the might of Figo, Adriano, Materazzi and the Inter squad which would end up cruising to the Scudetto.

It’s the perfect blend of style and hunger, outmuscling two Inter players before getting the defence exactly where he wants it. He somehow has the power to draw defenders and goalkeeper into a sort of concertina, luring Júlio César out just as he pushes the back four towards the Brazilian, allowing him to gently stroke the ball over his head as if lofting a golf shot out of a bunker.

It’s not unreasonable to expect someone to be capable of the first and final phases of the move, but to build a power-up of aggression and turn that energy into grace is something few besides Totti could ever produce.

Memories of Totti are sure to abound when Roma meet Liverpool, not least because his farewell game against Genoa saw him introduced as a replacement for the Merseyside club’s current top scorer, Mo Salah.

With his record-shattering goal tally in his debut season, Salah has provided Liverpool fans with a genuine superstar for the first time since Gerrard’s departure, and – while his connection may not be local – he has given young fans someone to look up to without needing trophies at the end of it all.

As Dion Fanning wrote in this brilliant personal piece: “So our son has come to expect these goals now and we sit with him and watch them. Every time Salah scores, he smiles. And every time he smiles, Salah’s goals seems to matter a little more.

“I don’t know why, but I do know that football – all sport – is not just about escape, it is about who you escape with and who you experience joy with. And sometimes you can lose that joy because the people you escaped with aren’t around anymore and maybe then it matters less.”

As the Egyptian reminds his former fans of the transience of attacking talent and the unlikely places in which we can find a home, there will also be a direct link to a man who could never have produced what he did anywhere other than Rome.

Following that farewell appearance, The Guardian’s Paolo Bandini recalled the words that Totti told the Roma faithful. It was not just a goodbye to them, but, in its own way, a goodbye to his own younger self, as if he had spent enough time contemplating finality as he had performing at the peak of his powers.

“Do you know that feeling of being a kid, and dreaming about something beautiful, but then your mum wakes you up to go to school when you only wanted to carry on sleeping?” Totti began.

“You try to hold on to the thread of the story you were caught up in but you can’t do it. This time it’s not a dream. It’s real life.”

This piece was originally intended as a tribute to Totti’s high points, and an appreciation of a talent increased tenfold by a love for his hometown club and its people. But in the week that Arsenal fans are coming to terms with the prospect of life after Arsène Wenger, it feels impossible not to dwell on the theme of goodbyes and the imprints left before, during and after them.

Wenger was the only constant in many lives, both within the context of Arsenal and, for those growing up in north London in the late nineties onwards, the wider world. For those in Rome, Totti was much the same.

They may still have De Rossi to carry the flag, and this may have helped them to adjust, but if Roma make it past Liverpool you can’t help but think they’ll have felt as though – for one night at Anfield and one at the Olimpico – they’ll have taken on the spirit of their greatest player.

Totti might be there in the stands, enjoying the game surrounded by those with whom he spent 20 years sharing his successes, but it will be the modern Totti with his sensible haircut and watching brief.

Those on the pitch, however, will be imbued with the essence of the other Totti, he of the flowing locks and unbridled emotion.

Football matches are never won by willpower alone, however much you want to believe they are, but Roma’s run has been about something almost intangible. Something…more.