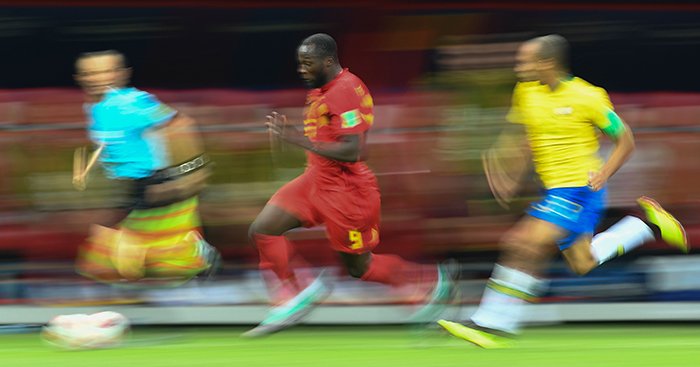 Romelu Lukaku scored 27 goals in his first season at Manchester United, but more often than not he merely provided the finishing touches to moves, the meat in the pie. For Belgium against Brazil he reminded everyone he can provide the gravy, too.

If people thought Belgium’s World Cup quarter-final against Brazil was going to be one-sided, they probably didn’t have this in mind.

Roberto Martínez’s team needed a fluke goal from Jan Vertonghen to spark a late comeback against Japan in the previous round, and they were up against a team which – with one goal conceded all tournament – was likely to be a little less forthcoming.

Winning was an achievement in itself, but to do so while showing such dominance for stretches of the game was beyond unexpected.

Displays of flair and ambition are historically associated with Brazil against everyone, and no one against Brazil.

Clearly no one told Romelu Lukaku.

His nutmeg may not have ultimately paid off, but with Belgium already one-nil up but the game still only in it’s early stages, Lukaku showed Brazil that he – and Belgium – would be playing with no fear.

Lukaku has spent the last season asked to play a more one-dimensional role by a Manchester United set-up which has also seen his supply-line thinned with the sale of Henrikh Mkhitaryan and the freezing out of Anthony Martial.

There were times when he was similarly isolated under Martínez at Everton, but when he was used well he could be unstoppable.

Threat from the right

Romelu Lukaku and Arjen Robben might not be two players you’d naturally compare, but the former has shown some of his best form when drifting in from the right like the Dutch veteran, forcing defenders back on their haunches and leaving them incapable of figuring out his next move even when it seems obvious.

In the light of his deployment on the right for parts of the Brazil game, some have pointed to his performance in a 3-0 Everton win over Arsenal in April 2014, in which he created space between himself and Nacho Monreal before leaving the Arsenal backline helplessly backpedalling as he cut inside and drilled the ball into the far corner.

The nutmeg against Brazil shares the movement in from the right, even if it lacks the end-product, and it shares the single-mindedness of a man who’s playing without restrictions.

In a recent piece for The Players’ Tribune, Lukaku spoke about how when he was growing up and playing youth football he treated every single game like a final.

“I used to try to tear the cover off the ball every time I shot it,” he said. “Full power. We weren’t hitting R1, bro. No finesse shot.”

There’s sometimes a sense that showboating should only be allowed when you’re in the lead, that it becomes almost disrespectful, but to make such an assumption either ignores or misunderstands the end goal of the play.

Many will reference another Manchester United player, Nani, and his seal dribble late in a win over Arsenal. However, Lukaku’s nutmeg on Miranda, while holding all the characteristics of a showy play, has more to it.

Throughout the 2018 World Cup, Brazil’s back four had rarely found themselves in such a vulnerable position. Casemiro, a man exposed to all of Real Madrid’s attacking flair at club level, offered a shield and the smarts required to stop his team-mates from being exposed.

However, with the midfielder suspended, it offered Belgium – and Lukaku – a chance to show their opponents they would he taking the initiative.

Belgium have retreated into their shell against daunting opposition before, not least against Argentina at the last World Cup, but Lukaku hinted early on that history would not be repeating itself.

The nutmeg wasn’t perfect, by any stretch, but that’s not what matters. It clipped Miranda’s heel on the way through, meaning the execution could have been cleaner, while Lukaku put a little too much mustard on it to the point that Thiago Silva was able to mop up.

If anything, it was a less impressive version of the move than the one pulled off by Gabriel Jesus later in the game.

However, the execution matters less than the willingness to try the move to begin with. It lets Miranda and his team-mates know they can’t relax, that rushing in could leave them open to embarrassment but that standing off could have the same effect unless they remain switched on.

Regardless of how many times they play in a televised game, footballers will never stop being wary of being made to look bad in front of an audience of millions, and even an imperfect nutmeg is an opponent’s way of saying “you’re dancing to my tune now”.

It leaves a defender unable to turn his back but simultaneously unable to go in too eagerly, for fear of acting as little more than a prop: the vase of flowers in Lukaku’s still-life painting, or the rabbit pulled from the Belgian’s hat.

No one wants to be known as the guy who got nutmegged twice, so there’s no better way to afford yourself space later on than by getting the first one in the book early.

And sure enough, Lukaku had the luxury of ploughing through the middle of the park as opponents stood off, paving the way for him to lay on the second goal of the game for Kevin De Bruyne.

Belgium will take on France in their semi-final, with the fluid frontline of Lukaku, De Bruyne and Eden Hazard likely to offer Les Bleus a different challenge to Uruguay’s front two of Luis Suárez and Cristhian Stuani.

Didier Deschamps’ team have demonstrated they can be got at, not least in their 4-3 victory over Argentina in the last 16, but Belgium need to return to what has worked for them and leave their opponents guessing.

If they can do that, a place in the final is well within their reach.