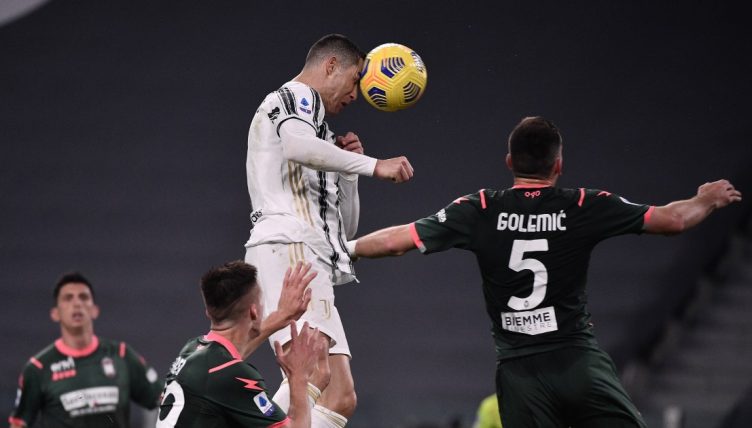 In Cristiano Ronaldo‘s career, chastening weeks have been few and far between.

During his time at Manchester United, Real Madrid and Juventus, he has won and won and won, almost inevitably scoring on the way to victory.

Ronaldo has now lifted 21 major club honours (excluding supercups) and scored over 760 goals. If those are much-repeated stats, it is because they merit repetition.

On an unlucky Saturday, February 13, Juve went down 1-0 to a penalty from Napoli’s Lorenzo Insigne at the Stadio Diego Maradona, despite dominating possession and having three times as many shots as their hosts.

Then on Wednesday, they travelled to Porto and were handed their backsides on a plate by Sergio Conceicao’s team, conceding two embarrassing goals and getting lucky to come away with a 2-1 defeat.

It was a blow to the Old Lady’s hopes of winning a tenth consecutive Scudetto, followed by a thwack to the chances of the club’s third – and Ronaldo’s sixth – European Cup.

Not only that, but the European defeat came in a week when Kylian Mbappe and Erling Haaland asserted themselves as the superstars of the coming generation, threatening to usurp Juve’s star turn and Lionel Messi at the very top of the world game.

Yet on Monday night back in Serie A, Ronaldo turned up with his game face on – the look of a man determined to show that there’s a fair bit of bite left in the old dog yet.

Within a few minutes he had stolen in at the back post to meet a Federico Chiesa cross, missing what was, by his standards, a sitter. The frustration on his face was clear as he shouted “filho da puta” into the night sky, but his movement was a sign of what was to come.

A few minutes later, Ronaldo had another shot at goal, a volley from 15 yards that was blocked by Vladimir Golemic. Then, seven minutes before the interval, he finally broke Crotone’s valiant but ultimately futile resistance.

Alex Sandro floated a cross to to the back post and the Potuguese automaton made the perfect run, evading the attentions of the entire back line to nod Juve into the lead. Still, that was only the warm up for the main event.

Crotone were well and truly on the back foot, and in injury time of the first-half, Ronaldo made them suffer in his inimitable style.

After a Ronaldo finger stinger had been pushed away by Crotone ‘keeper Alex Cordaz, Aaron Ramsey hung up a ball into what we might term the ‘Ronaldo zone’, that space between six-yard box and penalty spot from where he is so, so lethal.

The ball was high, but the leap was textbook Cristiano, Pele-like propulsion and Michael Jordan hang time, knees bent and neck arched.

Ronaldo mercilessly pummeled it into the bottom corner with the practice-hardened bit of bone just above his freshly plucked eyebrows, netting the 133rd headed goal of his career.

👉 The champions move to third in #SerieA, 8 points off leaders Inter with a game at hand! pic.twitter.com/SPUwOtW3i8

It was his 25th of the season in all competitions, making this the 14th season in a row that he has reached that mark, and his 18th in Serie A in 2020-21, putting him clear in the race to be crowned Capocannoniere, one ahead of Romelu Lukaku.

It was also his first goals against Crotone, meaning that he has now scored against every team currently in Serie A.

The opposition was admittedly as weak as they come, but this felt like the start of a movie we have seen before: the Champions League knock-out stages commence, Ronaldo gets angry and the goals start to flow.

If they win their game in hand, Juve will only be five points off Inter in Serie A. And with Ronaldo in this sort of mood, Porto had better watch out in the return leg of their Champions League tie in Turin.

Haaland and Mbappe are coming for the crown, but Ronaldo isn’t going to let them take it without a fight.