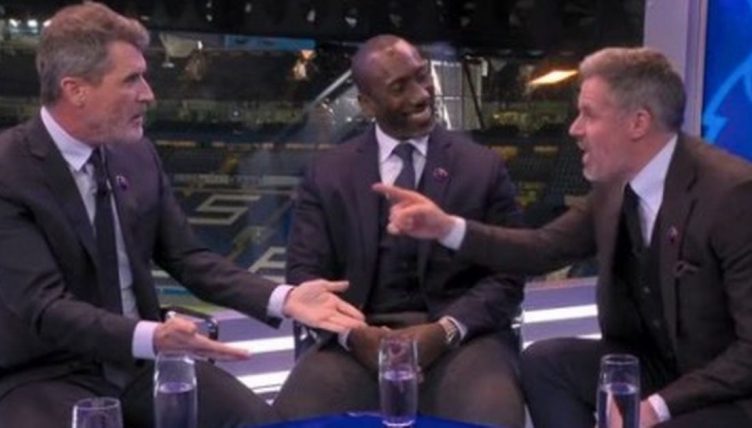 For all the problems currently befalling society, football can still inflame passions like little else.

Maybe it’s the tribalism. Maybe it’s the accessibility of the top clubs meaning its protagonists feel more familiar to us than members of our own family.

Or perhaps it’s that extremes of opinion are actively encouraged by content-fetishising media platforms, knowing that clicks often come from users rubbernecking at an argument.

Or, when it comes down to it, perhaps it’s the fact that there’s nothing quite as amusing as two fully-grown men lose their shit over something that, ultimately, doesn’t matter.

After all, the reason football is so important is because it’s so unimportant in the grand scheme of things.

And, with Christmas looming into view, it was kind of Roy Keane and Jamie Carragher to kickstart the pantomime season with a fierce debate about Cristiano Ronaldo.

Both pundits are known for their strident views and impassioned methods of translating them to a watching audience; Keane with the energy of a permanently disappointed father-in-law and Carragher in the manner of a suburban dad with particularly strong opinions on barbecuing meat.

The exclusion of Ronaldo from Manchester United’s starting XI during the 1-1 draw with Chelsea turned out to be the ingredient that caused this boiling cauldron to bubble over.

Keane argued that Ronaldo should always start the biggest matches – not an unreasonable opinion given his pedigree and goalscoring contribution to United’s ailing season.

In the other corner, Carragher questioned the decision to re-sign the 36-year-old given United’s failure to keep pace with Chelsea, Liverpool and Manchester City.

The result was four and a half minutes that caused a disturbance amongst the dog population of west London.

If you’ve not already seen it, our advice is as follows; grab a bag of popcorn, sit yourself down comfortably and be prepared to chuckle.

A couple of things stand out here. Firstly, while this observer would award Carragher victory on points, the subject matter is essentially irrelevant.

The former captains of Manchester United and Liverpool could be arguing about Ronaldo, mask-wearing or the amount of self-raising flour to put in a carrot cake and it’d still make compelling viewing.

Secondly, it makes you question what we want from our pundits. It has felt over the past decade that viewers wish to be educated and informed about aspects of the game they know little about, with Sky’s Monday Night Football leading the way in informative broadcasting.

Equally, a strong minority exists that views football as entertainment and wants pundits to behave accordingly. This favours strong opinions, put across in attention-grabbing ways, and explains the continued employment of Keane.

Thirdly, Jimmy Floyd Hasselbaink steals the scene here. Sat in the middle, with a grin more befitting of a Cheshire cat, Hasselbaink observes proceedings like a student feeling the effects of a herbal cigarette at an after-party.

All of which is to say that it was terrific entertainment.

Whether you’re Team Keane or Team Carragher, there’s one thing we can all agree on – more of this please, fellas.